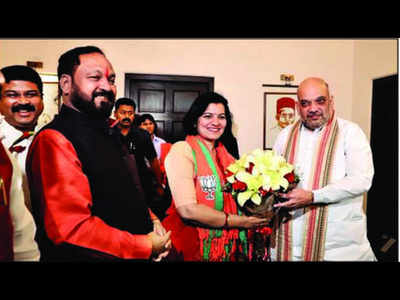 Aparajita Sarangi, the bureaucrat-turned-politician said she joined the BJP after being impressed by the “determination and hard work” of Prime Minister Narendra Modi which she witnessed during her Central deputation.

State politics is set to get spiced up with a senior bureaucrat stepping into the arena. Former IAS officer Aparajita Sarangi has joined the BJP in the presence of party president, Amit Shah in Delhi.

Eversince Sarangi applied for voluntary retirement a couple of months ago, speculation was rife that she would join politics. The 1994 batch IAS officer had 11 years of service left.

“We work in a limited sphere bound by a certain boundary while in service. But in politics, one can get wider platform to serve people, “said Sarangi after formally joining the BJP today.

The bureaucrat-turned-politician said she joined the BJP after being impressed by the “determination and hard work” of Prime Minister Narendra Modi which she witnessed during her Central deputation.

“It was my conscious decision to join BJP. I took the decision after reading three books on BJP and consulting many people”, she said.

In Bhubaneswar, union tribal affairs minister Jual Oram welcomed Sarangi to the party fold. Replying to a media query, Oram said, “The party will fight the next election in the state under the leadership of Union petroleum minister Dharmendra Pradhan”.

Reacting to the speculations that senior BJP leaders Bijoy Mohapatra and Dillip Ray were likely to quit the party, the veteran leader said, “It might be their personal decision”. He said that BJD was trying to appropriate all the credit for hosting the hockey world cup in Odisha.

BJP state president Panda said the joining of the former bureaucrat, who was very popular in the state, would help the party. “She will play a key role in the party in the coming days In the past she had served  as  district collector of Khurda, Commissioner of Bhubaneswar Municipal Corporation and Secretary of School and Mass Education department. The dress code of school teachers was introduced when she was at the helm of the School and Mass Education department.”

There is growing speculation over what the response of state BJP leaders would be to the induction of Aparajita who is a strong-willed woman and may try to chart her own course of action. “Let us see how it goes. We have to watch the developments and then we will know how it works out,” said a senior party leader.