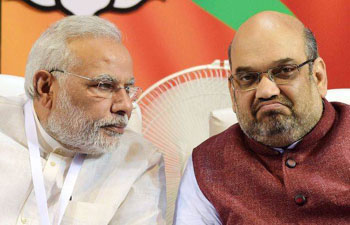 The PM was not just the star, but also the sole campaigner for the BJP addressing rallies and public meetings.  In his interviews, Shah has made no secret of his admiration for the PM, maintaining that the vote was for him and not the BJP. In fact, important decisions are taken by both without necessarily consulting the BJP.

Prime Minister Narendra Modi and BJP President Amit Shah make a strong team. They act in tandem with perfect understanding and share a trust of which there is a deficit in most political parties.Though Shah always keeps Modi posted about his moves he acts with the authority of an independent leader. The relationship between him and Modi is often compared to that of former National Security Advisor Brajesh Mishra and then Prime Minister Atal Behari Vajpayee. Few leaders enjoy such relationship.

In the case of PM Modi and Shah the latter is more of a listener and a follower. He executes the Prime Ministers will. Several elections in the past have demonstrated the close understanding the two now at the helm of affairs have. The campaign strategy was carefully calibrated, and strategised for maximum dividend. The number of rallies the PM would address, the constituencies and the precise vote banks he would target, the arguments he would make in his speeches were  all worked out in detail. othing is left to chance as both Shah and the PM are perfectionists who are clear of their target, and then work to achieve it.

The Congress party with its flaky leadership, and lack of cohesion is not a patch on the two leaders running the show in the BJP. Interestingly both Shah and PM Modi select their own favourites from the ground.

The BJP has been reduced to a virtually bystander organisation, with all other leaders quite out of the picture except when asked to campaign or spoken to by the duo. In the elections the PM was not just the star, but also the sole campaigner for the BJP addressing rallies and public meetings.  In his interviews Shah has made no secret of his admiration for the PM, maintaining that the vote was for him and not the BJP. In fact, important decisions are taken by both without necessarily consulting the BJP.

Once this had led to a storm of protest with the Shiv Sena hitting out, and BJP leaders at the centre perplexed about the sudden turn of events. However, all have for some reason decided to keep their counsel with a senior Congress MP saying with some glee that BJP leaders were terrified of Shah and dare not speak their mind. Shah stuck to his ground, PM Modi supported him with silence.

With such a solid combination the BJP is certain to go places. Much would, however, depend upon the results of the elections in Rajasthan, Madhya Pradesh and Chhatisgarh where the contest is keen. If the BJP is able to retain power in these states Modi-Shah combine would prove its supremacy yet again. If the party loses it would find it a little hard to retain the confidence of people and its own rank and file  in the leadership of Prime Minister and Shah.