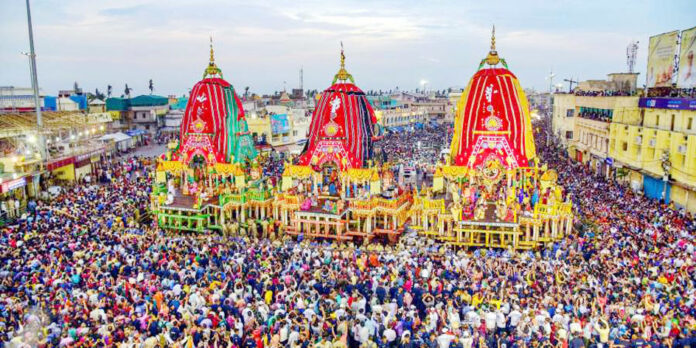 Odisha was the place for growth of Pashupat- Shaivism. Savants of Matta Mayura group, Lakulisha community flourished in Odisha as different branches of Shaivism. Innumerable sculptural representations speak the glory of their philosophical greatness and penance of unthinkable degree.

The religious assimilation that India saw is attributed to Adi Shankaracharya who by his spiritual power came to know that Jagannath, the lord of the land has been kept underground during the period when the idolaters were ruling over India. Adi Shankaracharya recovered and consecrated the image in Puri, on the tenth day of the bright fort night of Vaishakha. Thus in commemoration of this unique event, almost two thousand five hundred years back the sovereign religious preceptor of the Hindus established a monastery named Gobardhan Pitha and his first disciple Padmapada was coroneted as the first pontiff of this monastery.  Thereby Odisha became a privileged State to have the first religious seat of Hinduism following Rig-Veda in the East and Padmapada the favoured disciple of Adi Shankar became the pontiff and Puri is one of the highest sacred seats of Vedic tradition. Adi Shankar could have established this seat in any other place but he did not do that. He preferred Odisha that tells its spiritual magnanimity.

Wooden images of Adi Shankar and Padmapada were placed on the venerated platform along with the images of Jagannatha etc. It was in 1783 some unscrupulous servitors of Jagannatha displaced and destroyed those two images secretly.It was due to the Hindu rulers of the region especially from 9th century on ward Odisha became the stronghold of Hinduism. Hinduism penetrated into this region from Gupta rule in general and Samudra Gupta in particular as is known from his Allahabad Pillar Inscription. Therefore we have Siva temples, temples for Mother Goddesses and Vishnu temples to worship these deities as paramount deities of the region.

From one 10th century epigraph in the Sarada Temple in Maihar (Satana District of Madhya Pradesh) it is proved that Purushottama Vishnu as depicted in the SaradaTilaka text written by a Kashmiri scholar (9th century) named Laxmana Deshika was under worship in Odisha at Puri on Sea. Chola Ganga, a powerful King as he was started building a gargantuan temple for Purushottama in 1112 A.D. and it was completed in 1135 A.D.