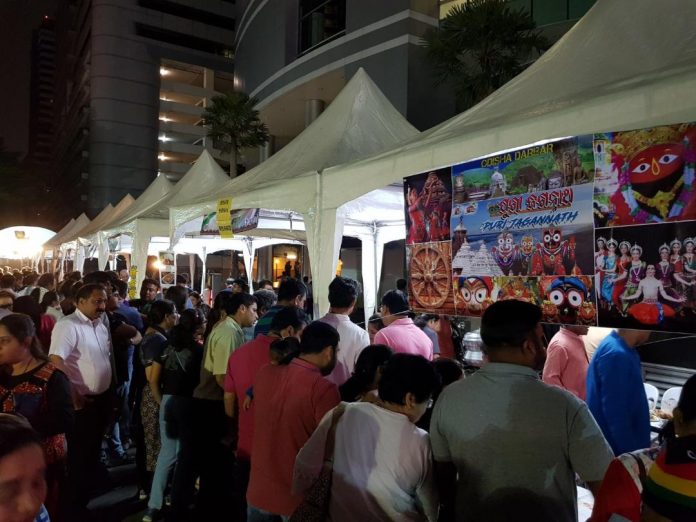 Blessed with a vast treasure trove of art and culture, the state should have been the toast of the culture world. Instead, it is yet to get due recognition. There are several smaller shrines, examples of great craftsmanship that remain out of focus; because there is no effort on the part of the state government to promote them. All this happen, because of inefficient political bosses and equally feckless mandarins.

The 4th Thai-Indian Fun Fair held on February 3, 2018, at Srinakharinwirot University, Sukhumvit 23, Bangkok drew tremendous response. Participating in the festival that is gradually gaining popularity were several popular restaurants such as Indian Delight.

While the fair showcased 16 Food stalls and 20 market stalls along with a heritage corner, one of its major attractions was  Odisha Darbar, the stall put up by the Odisha society that served typical Odia delicacies including  Dahi vada – Aloo Dum, Gupchup, Papdi chat, Samosa, Chenapoda, Malpua and Rasabali. The society was keen on giving people in Bangkok a taste of Odia food and bringing together the Odias living in the capital city.

The Odisha Darbar Team comprising Punya Sahoo, Monica Sahoo, Samir Roul, Shubhosree Deo, Sitakant Pradhan, Puspalata Pradhan, Niranjan Sahoo and Sasmita Sahu drew much applause for its efforts. The growing popularity of the fair, especially Odia cuisine, is proof that given the right kind of support the art, culture and cuisine of Odisha can be a hit among the people abroad.

Unfortunately, state’s tourism and culture bosses have singularly failed to market the heritage and culture of Odisha which is the most important factor impeding the growth of tourism sector. Blessed with a vast treasure trove of art and culture, the state should have been the toast of the culture world. Instead, it is yet to get due recognition. All this because of inefficient political bosses and equally feckless mandarins.

Truth to speak the hard-sell that is required to promote state’s art and culture is lacking. Thanks to blundering bureaucrats the state has missed many opportunities on this front, a glaring example being their failure to rise to the occasion when the Nabakalebara festival a few years ago presented an excellent opportunity to showcase the state’s best before the rest of the world.Forget Odia cuisine which hardly ever finds itself in limelight except on occasions like Raja even handicraftsmen from Raghurajpur, the most famous crafts village in the state, have not been getting the attention they deserve. Had the government of India not been generous enough they would have been languishing in neglect.

Among our temples the only ones that the international community gets to know about are the famous sun temple at Konark and the Puri Jagannath temple. However, there are several smaller shrines, examples of great craftsmanship that remain out of focus; because there is no effort on the part of the state government to promote them.The same could be said of nature tourism spots in the state which, with a little effort on the part of tourism department, could be among the best in the world.  The state is full of nature sanctuaries, sparkling waterfalls and lakes which could attract the footloose tourists by the hordes. But with proper tourist facilities yet to be developed at these places they don’t get the kind of football one would normally expect.

“The problem lies with our policy makers and the bureaucrats who execute them. Unless we have dedicated politicians and bureaucrats our art, culture and tourism will continue to wallow in neglect,” said an observer.