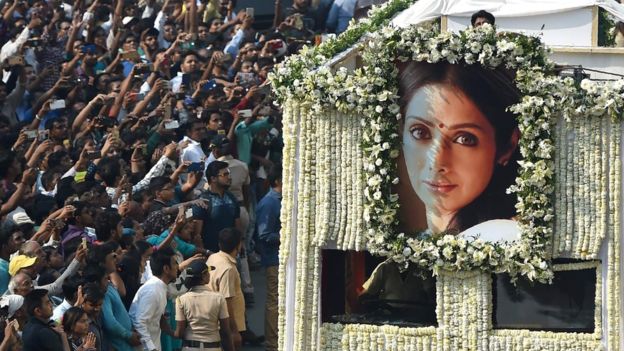 The reportage on Sridevi’s death was a new low in journalism. In fact, it was not even journalism, just four days of entertainment at the cost of an untimely and shocking death of an icon. The TV channels were least interested about knowing the circumstances leading to her death. Most of the so called reports revolved around gossips not having an iota of truth.

Sridevi was an icon for millions of Indians. In her short lifespan of 54 years, she spent 50 years in the film industry. She acted in hundreds of films in Hindi, Telugu and Tamil, and stayed at the top demonstrating her acting prowess and star power.

So it was definitely big news deserving wide coverage in media when she died untimely and unexpectedly on the night of February 24. The media too covered it widely the moment it was reported that she died in the bathtub of a hotel room in Dubai following a cardiac arrest. There were glowing tributes to her from all over.

However, the narrative changed the moment it was stated by the Dubai authorities that she died due to “accidental drowing” in a bathtub. The TV news channels that are now on the forefront of generating public opinion (or diverting it?) unleashed unprecedented level of gutter journalism, with songs and dialogues from her films, representative pictures of bathtubs of various shapes and sizes dominating all over the TV screens. “Bathtub Ka Hadsa (tragedy of bathtub)” was the headline of one of the top TV channels. Another top news channel titled its programme as “Maut Ka Bathtub (bathtub of death)”.

When the Dubai authorities indicated that alcohol contents were found in her body, some channels came up with bizarre programmes with dramatic voiceovers. “Sharab ke nashe ne chhin li Sridevi ki zindegi (Sridevi lost her life to intoxication)” was one of the ridiculous voiceovers. The title of a programme in a channel was “Sharab Ka Nasha (intoxication by alcohol)!

The channels did not stop here. They experimented with the computer graphics to create some sadistic images with pictures of Sridevi floating in a bathtub with liquor bottle on its side. A reporter of a Telugu channel went to the extent of lying in a bathtub to measure its depth. Some channels concentrated their debates on women consuming liquor. “Is it good for women to consume liquor?” an anchor asked a panel including few women in a TV studio! One channel found an expert on alcohol in politician Amar Singh who explained difference between hard drinks, beer and wine. He claimed with authority that Sridevi never consumed hard drink. “She may be consuming wine once in a while,” the “expert” said as if he knew everything about the actress and her family.

The channels even opened phone lines asking viewers to chip in their comments on if there was any foul play in the veteran actress’ death. The TV studios became judgement room with the anchors being the investigating officer, prosecution and judge. Without having confirmed or unconfirmed information, they pointed the finger of suspicion towards her husband Boney Kapoor.

The salacious speculations continued 24×7 till finally the Dubai authorities completed their investigation and allowed her family to take her mortal remains to India. The so called reportage on Sridevi’s death was a new low in journalism. In fact, it was not even journalism, just four days of entertainment at the cost of an untimely and shocking death of an icon. The TV channels were least interested about knowing the circumstances leading to her death. Most of the so called reports revolved around gossips not having an iota of truth.

Once Sridevi’s mortal remains were in India, the same channels telecast live the whole funeral process the whole day. They counted the film stars who visited her house and cremation ground all the time and reported about who was moist eyed and who cried loudly and inconsolably. No other news occurred across India on that day. Such massive coverage of a funeral was probably seen last time when Shiv Sena founder Bal Thackery died few years back.

Though Sridevi’s death deserved wide coverage in the national media considering her standing in the field of art, the news channels shamelessly turned it into a grotesque affair. It is not just about TRP for the corporate controlled and revenue driven news channel. It is about overshadowing all other issues of national importance. The focus on Sridevi definitely tried to divert public attention from recent bank fraud scams worth thousands of crores of rupees that have cast a shadow on the image of the ruling BJP as well as Prime Minister Narendra Modi.

Journalism requires courage and the channels do not have guts to be as curious about the mysterious death of justice B.H. Loya, who was hearing an encounter case in which BJP president Amit Shah. Corporate channels would not touch any story with the involvement of powerful people in the ruling establishment even with a bargepole. On the other hand, a soul like Sridevi may be famous but is an easy target for them.