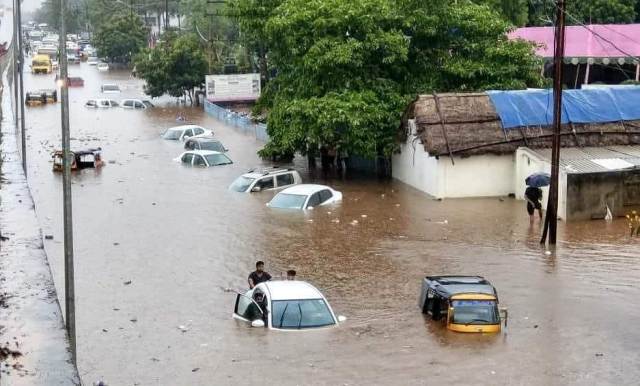 Blame game continues over waterlogging at Naypalli with both the municipal corporation and the National Highways Authority of India (NHAI) accusing each other for the situation. Water-logging is turning out to be a major problem in Bhubaneswar with drains being encroached by illegal constructions undertaken by builders, VIPs and the slum dwellers.

Water-logging is turning out to be a major problem in Bhubaneswar with drains being encroached by illegal constructions including slums. Such has been the pressure to bring things back to normal that the Bhubaneswar Municipal Corporation (BMC) has decided to construct seven new drains in different parts of the city.

The decision was taken during a review meeting of officials in the backdrop of waterlogging in the city that reached alarming levels near Iskcon Temple on the NH-5, and parts of Nayapalli, Acharya Vihar, Old Town and Soubhagya Nagar.

The Bhubaneswar Municipal Corporation will spend Rs 9.45 crore on the drain project.”Several councilors aired their grievances after the waterlogging over the past few days. The areas were selected after a quick analysis and the work will be taken up on priority,” said a civic official.

However, residents alleged that the authorities selected areas where the situation was not alarming. They also alleged that there was no discussion to solve problems in areas reeling from waterlogging.

There was also no discussion on constructing box-type drains that was proposed for Acharya Vihar to divert rainwater to the Natural Drainage Channel No. 4 to save people from waterlogging in the area. Acharya Vihar was selected for the project, sanctioned last year, since it is among the prominent problematic areas.

Mayor Ananta Narayan Jena, however, refuted the allegations levelled against the civic body and said that they were making all-round efforts to avoid recurrence of water logging in any part of the city in the future. He said: “The drains will help the residents. We are steadily taking up the job according to the master plan.”

Blame game also continued over waterlogging at Naypalli with both the municipal corporation and the National Highways Authority of India (NHAI) accusing each other for the condition. The stretch in fornt of Iskon Temple was waterlogged for the second consecutive day though Bhubaneswar received only 7.1mm rainfall.

Mayor Ananta Narayan Jena accused the NHAI of not taking concrete steps for water evacuation in the area. “The firm that construed the flyovers between CRP Square and Rasulgarh did not take care of rainwater drainage. We have also shot several letters to the NHAI seeking a permanent solution to the problem, but they are yet to come up with any,” Jena said.

On the other hand, the NHAI denied the allegations and said they had done sufficient work on their part for discharge of rainwater from the national highway. The NHAI also blamed the civic body for not being able to come up with proper drainage in the area. Finally some alleged illegal constructions at the Iskcon Temple have been demolished amidst protests and police lathicharge.

Several vehicles were submerged at the place a few weeks ago after a brief spell of rain. Traffic was also disrupted for long hours.