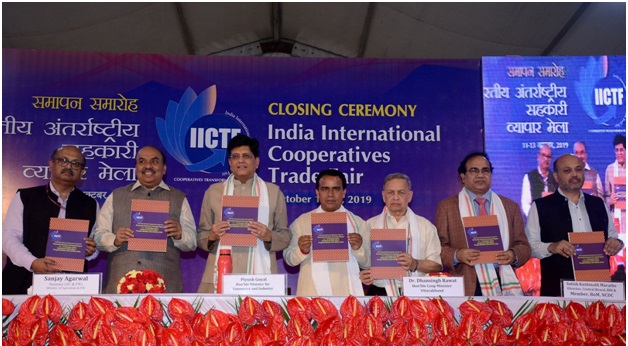 Union Minister for Commerce and Industries Shri Piyush Goyal has called for discipline and professionalism in the cooperative sector. He also recalled while addressing the closing ceremony of “India International Cooperative Trade Fair’ (IICTF) in New Delhi today that the foundation of the cooperative movement was laid by Sardar Patel. The Minister expressed happiness that the foot fall at the IICTF has been more than 35 thousand and the trade enquires were more than 4 thousand, a number of VVIPs like Governors, Chief Ministers other Ministers and foreign dignitaries attended the fair. Stating that there should be an International framework for expansion of the cooperatives Shri Goyal gave ideas on how indigenous and ethnic products produced by cooperatives can be marketed on e-commerce platforms.

In line with Government’s focus on programmes like Start-up India and Stand-up India aimed at young entrepreneurs with new and innovative ideas, National Cooperative Development Corporation (NCDC) has formulated Yuva Sahakar-­Cooperative Enterprise Support and Innovation Scheme 2019 which was also launched at the fair. Sahakar Bharati, the single largest organisation focusing on enlightening masses about the benefit of cooperative movement also show cased and launched their brand ‘Simplydesi’ which will provide good marketing and branding opportunities for cooperatives.