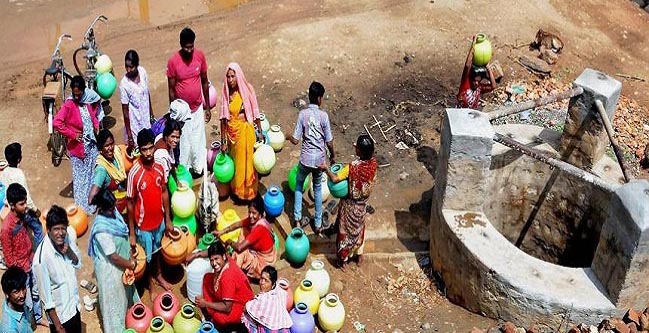 For the past few years the capital city has been witnessing extreme heat conditions during summer. The rise in temperature has alarmed even experts some of whom have blamed growing urbanisation and disappearance of green cover and water bodies for the phenomenon.

Water is such a precious resource that its depletion is causing concern around the world. Yet water conservation is yet to become a priority area for the Odisha government. While huge quantity of water is wasted daily in both rural and urban areas of the state water harvesting structures are not receiving the kind of attention they deserve from the government.

Over a decade ago water harvesting had begun as a movement in parts of western and southern Odisha with a large number of voluntary bodies taking it up as a mission. Structures big and small came up in village after village and the resultant boost to agriculture was encouraging to say the least.

One of the biggest advantages of water harvesting is that it not only helps people store necessary water for use for various purposes it is also a major source of ground water recharge. Considering that ground water table is fast receding it is very important to conserve this resource and also to keep recharging it for the good of us all.

What is significant is that we seem to be lacking an overall strategy for the judicious use of water available to us from various sources. Be it river water or water in ponds and canals, we have not been able to use it properly. Our failure is also having an adverse impact on our environment and causing adverse climatic changes.

Take the case of Bhubaneswar for example. For the past few years the capital city has been witnessing extreme heat conditions during summer. The rise in temperature has alarmed even experts some of whom have blamed growing urbanisation and disappearance of green cover and water bodies for the phenomenon.

Some of the old water bodies which used to keep the city cool during the summer have vanished with construction mafia encroaching all kinds of open spaces including wetlands, small ponds and streams. This is bound to have its impact.

Bhubaneswar is one of the few cities in the country to have the advantage of a buffer forest in the shape of Chandaka sanctuary located in its backyard. The Chandaka forest with some interesting wildlife species juts into the city whose outskirts are still visited by herds of elephants.

But urbanisation is taking its toll. Buildings and houses are coming up in all directions of the city including areas close to the famous Nandan Kanan park and the Chandaka sanctuary. Real estate boom is welcome but unregulated urbanisation is bound to have its consequences. A few years ago a group of environmentalists had urged the state government to call a halt to constructions close to Nandan Kanan as it could have an adverse impact on the zoo’s captive menagerie.

However, nothing seems to have changed. Builders have a way of circumventing the law and huge apartments keep coming up in all parts of the city. These multi-storeyed structures also tax the city’s ground water resource with water table progressively receding. The warning is already there. It is a matter of how do we react to it.