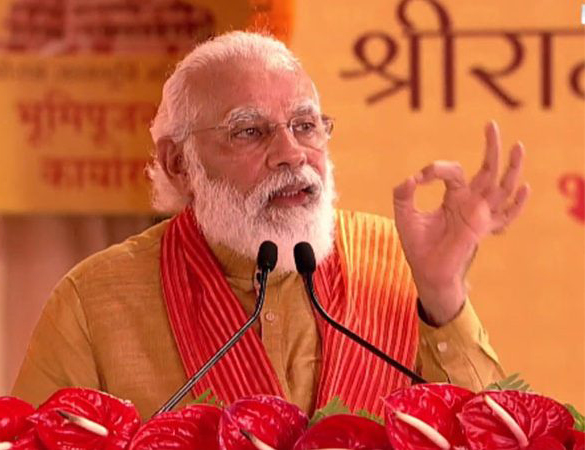 “Ram is everywhere, Ram belongs to all”, said Modi adding that the temple in Ayodhya would symbolise India’s rich heritage and stand as an inspiration for all of humanity.

There are several ways of interpreting what happened at Ayodhya on August 5 when Prime Minister, Narendra Modi performed the   historic ‘bhoomipujan’ for the much-awaited Ram temple in the holy town. His visit to the UP town has expectedly triggered a flood of reactions. Even Congress leaders have been forced to react with many of them welcoming the foundation laying for the temple.

On the other hand there have been neutral elements like former India cricketer Mohammad Kaif who tweeted a message of love and brotherhood. “Growing up in Allahabad, a city with Ganga-Jamuna culture, I loved watching Ramlila-a tale of compassion, co-existence, honour and dignity. Lord Ram saw goodness in everyone and our conduct should reflect his legacy. Don’t allow the agents of hate to come in the way of love and unity,” wrote the cricketer.

Kaif may have been criticized by some Muslim community leaders but there is no denying that his comments represent the feeling a vast majority of Indians who want the temple to come up. On the bhoomipujan day there were celebrations all around. It was a public outpouring of feelings on an occasion that marked the fulfilment of a much cherished dream.

Congress leader, Rahul Gandhi also tweeted in Hindi. Translated his tweet would mean, “Maryada Purshottam Lord Ram is the ultimate embodiment of supreme human values. He is the core of humanism embedded deep in our hearts. Ram is love, he can never appear in hatred. Ram is compassion, he can never appear in cruelty. Ram is justice, he can never appear in injustice.” His tweet, thus extolled the virtues of lord Ram and also sent out a message that conveys that hatred must end and love must prevail. That is indeed what the country needs today.

The Prime Minister, thus, seems to have taken the right step by visiting Ayodhya and performing the bhoomipujan. Significantly, he also paid homage to the people who made sacrifices for the construction of the temple and sent out a strong message of love and unity. “Ram is everywhere, Ram belongs to all”, said Modi adding that the temple in Ayodhya would symbolise India’s rich heritage and stand as an inspiration for all of humanity.

The Prime Minister also emphasized the need for social harmony as this was the core principle of Lord Ram’s governance and he also underscored the need to make India more powerful. For him apparently the construction of Ram temple at Ayodhya is a way of uniting the country with love and fellow feeling among people. “We have to join stones for construction of Ram temple with mutual love, brotherhood,” said the Prime Minister while asserting that everyone’s sentiments have to be taken care of. His message rang loud and clear and every Indian must have taken note of it. It is time to end hatred and unleash the power of love.