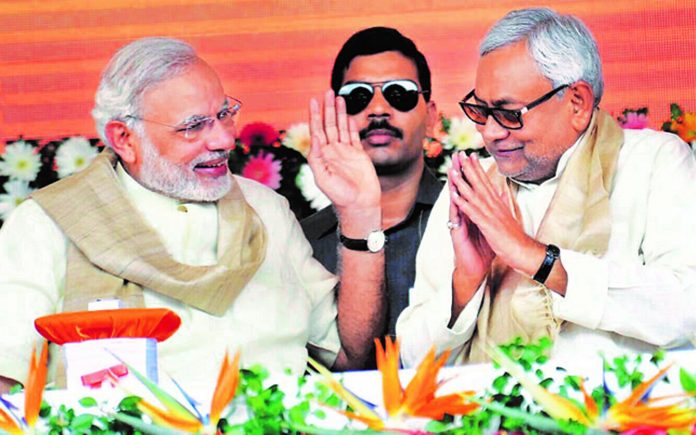 The relations between Lalu and Nitish had soured was beyond doubt. But a section of leaders from both parties were hopeful of a patch-up. No wonders JD(U) leaders like Sharad Yadav have been both surprised and hurt by Nitish’s move which is bound to have a bearing on the 2019 Lok Sabha polls. The secular combine including the Congress sees the move as a major jolt even as it was preparing to halt the BJP juggernaut.

Janta Dal (United) (JD(U)) leader Nitish Kumar has become the chief minister of Bihar for the sixth time after dumping the Rashtriya Janata Dal (RJD) and the Congress with whom he had formed the Mahagathbandhan ( grand alliance). Back in the NDA the JD(U)-BJP coalition won the trust vote in the state assembly comfortably.

The 66-year-old Kumar, who studied engineering in college before plunging into the JP movement, sought to break away from RJD because it was proving to a troublesome ally. In fact, he felt that RJD boss, Lalu Prasad Yadav was trying to blackmail him taking advantage of the fact that the party had more MLAs in the state assembly than JD(U).   RJD had refused to concede the demand for Lalu’s son and deputy chief minister, Tejaswi Yadav’s resignation.

That relations between Lalu and Nitish, often referred to as the Chanakya of Bihar, had soured was beyond doubt but a section of leaders from both parties were hopeful of a patch-up. No wonders JD(U) leaders like Sharad Yadav have been both surprised and hurt by Nitish’s move which is bound to have a bearing on the 2019 Lok Sabha polls. The secular combine including the Congress sees the move as a major jolt even as it was preparing to halt the BJP juggernaut.

To Nitish’s credit he had led the ‘Mahagathbandhan’ (Grand Alliance) comprising  JD(U), the RJD and the Congress to a stunning victory in the last assembly elections. RJD may have won more seats but Nitish was the face of the alliance and the election was fought on his performance and credibility.

Nitish knew right from the beginning that the so-called glue of fighting anti-communal forces notwithstanding it would be hard to live with an ally like 69-year-old Lalu Prasad Yadav who is also a product of JP movement. He knew that Yadav given the allegations of corruption against him and his finally could prove to a liability at some stage or the other and that a day would come when he would have to pull the plug on the alliance.

Though Congress wanted Kumar to continue in power with its support the chief minister must have realized that given Congress’s weakness for Lalu it would be a risky proposition. Besides he would never have the freedom to run the government the way he wants.

He is a smart politician who has built up the image of being a sincere chief minister with zero tolerance for corruption. One would recall his discomfort when “Bahubali” RJD leader, Shahabuddin was released from jail and was taken to Siwan by his supporters in a procession that left people on the way terror-struck.

While Lalu, for whom Shahabuddin has been a close aide and a symbol of his MY ( Muslim-Yadav) politics, kept quiet, Nitish let his ally know that he was unhappy and the government soon went in appeal against the alleged don-turned-politician’s bail. He was back in jail soon.

Nitish is known as a master strategist and firm in his resolve. He is also a man of principles who has proved time and again that he does not tolerate corruption. A clever politician he has also been garnering votes by appealing to Biharis pride. Even Sushil Kumar Modi, the tallest BJP leader from Bihar and present deputy chief minister, admits that Kumar has charisma and vision to take Bihar forward.

Nitish, it seems, loves to surprise his rivals. When he broke away from the BJP in June 2013 he had left almost the entire nation stunned. His resignation from the chief minister’s post after the JD(U)’s massive Lok Sabha defeat in May 2014 and elevation of his protegee Jitan Ram Manjhi as chief minister was equally surprising. And then he deposed the latter and assumed power again in February 2015 for a fourth term. For many Nitish would remain an enigma but there is no denying that he is one of the most successful politician that Bihar has produced and one who has also impacted national politics.