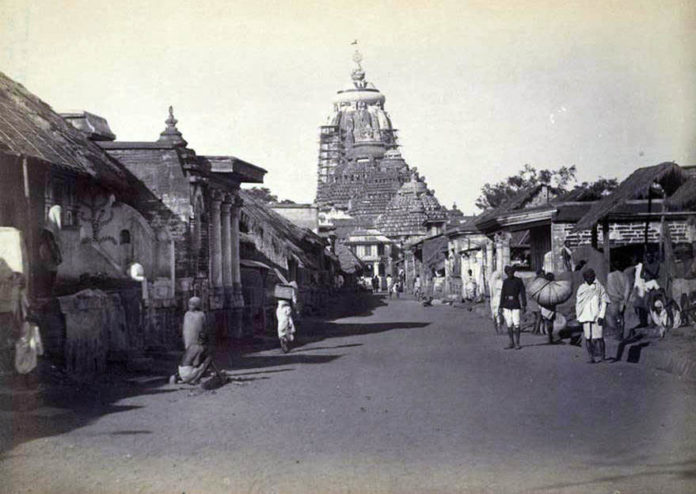 Wooden images of Adi Shankara and the first pontiff of Gobardhana Matha Padmapada were enshrined on the Ratna Simhasan and were worshipped along with the Chaturdha Murty in Sri Mandira. And this historical event has been indicated in the Madala Panji through attack by Raktabahu and recovery of the deities by a king named Jajati.

The most important aspect of the history of worship of Sri Jagannath in Puri is about attacks   into the temple. Till date scholars believe that iconoclasts attacked the temple almost eighteen times. Numerically this is fictitious. May be the 17 time attack by Sultan Mamud into the Somanath Temple has tempted some to evolve such a numerical narrative, though actually temple attack is limited to 12 times only. All such invasions can be  broadly classified into two groups such as major attacks and minor attacks considering the impact of such attacks on the tradition of worship of Sri Jagannatha. As Puri is famous for simultenous worship of gods belonging to two cults, Purushottama and Sri Jagannath we can also divide these attacks into two classes such as attack on Purushottama and attack against Jagannatha.The major group consists of three attacks such as the attack by Raktabahu, attack by Feroze Shah and devastation by Kalapahad. Madala Panji records that Raktabahu attacked during the rule of one Sobhana Deva and the images were secretly shifted to a far distant place. The images remained there being hidden for 146 years till King Jajati Keshari recovered, constructed new images, built a temple and enshrined the images. All these were done as per advice of one Acharya. The oldest monastery Gobardhan Math at Puri is the only math where Jagannatha is the presiding deity. The matha explains that it was Adi Shankara recovered the images of Jagannath, Badrinatha and Dwarakanath who were hidden to be saved from the devastating chaos and anarchy thrusted upon Hindus by iconoclasts and established three Maths in concerned places; reintroduced their worship and declared those three places as the spiritual capital of Hindus. Wooden images of Adi Shankara and the first pontiff of Gobardhana Matha Padmapada were enshrined on the Ratna Simhasan and were worshipped alongwith the Chaturdha Murty in Sri Mandira. And this historical event has been indicated in the Panji through attack by Raktabahu and recovery of the deities by a king named Jajati.

Feroze Shah attacked in the year 1361 when Purushottama was under worship in the present temple and he took away the stone image of Purushottama. The temple remained derunct for 90 years when in 1451 Kapileswara Deva installed wooden images of Jagannatha and 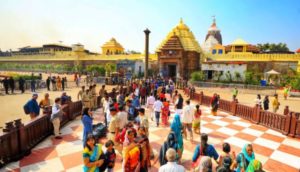 others in the said temple. It was in 1568 Kalapahad attacked the temple and took away the wooden images. Kalapahad has become a legendary figure of demolition of Hindu temples. But it is strange that there exists a village named Kalapahada near Suando in memory of this oppressor. Here attempt has been made to prepare a list of all other minor attacks on the temple and plunder of temple wealth by Muslim invaders.

Before the invasion of Feroze Shah the powerful Ganga Kings started becoming weak. In 1328 Narasingh Dev-III became the ruler of the Ganga empire after death of Bhanu Dev. Ilias Shah, the then Sultan of Bengal attacked Odisha. Though we do not have dependable date of his campaign yet it can be tentatively said to have occurred in 1339 or  a little later.

After Feroze Shah invaded the temple one Ismil Gajhi made an invasion into the Puri temple. in the year 1509 during the rule of Prataprudra Dev, the grandson of Kapilendra Dev. Ismil was then the General Chief of the army of the Sultan of Bengal Akkah-din-Hussain Shah. Ismail taking the absence of Prataprudra from Odisha being engaged in controlling the revolting royal officers in the South came with his force and plundered the valuables from the temple treasury. Being informed of attack by Ismail the king very soon rushed back to Odisha but by that time Ismail had started returning. However, Prataprudra followed him up to the Hooghly district but Ismail safely escaped.  (History of Bengal Vol-II P.148).

Mysteriously just after two years of consecration of new images in the temple by Ramachandra Dev two Muslims named Suleman and Osman invaded Odisha and created havoc by killing Hindus indiscriminately in the year 1592.

After Akber Jehangir was coronated as the Mughal Emperor. During his rule Muslims continued their misson of attacking the Puri temple and plundering its treasury. Madala Panji, the temple chronicle, speaks that after death of Ramachandra Dev his son became the king of Odisha bearing the name Purushottama Deva. During 8th Anka of his kingship one “Khurumu” came (1601 CE). Parameshwara (Sri Jagannatha) was taken to the nearest Brahmin Sasan Kapileswarpur being carried in a Choudala (a special wooden carrier). But this report is highly confusing as it indicates carrying one image.  Sri Jagannatha was kept in this village up to Dola Purnnima after which his return journey was enacted.

The temple chronicle informs that  in the year 1607CE the temple was attacked and this time the attacker was one Hasim Khan, the newly appointed Subedar of Odisha. Parameswara was transported and kept secured in the Gopaljew temple within the royal palace in Khurda and there the deities remained almost a year before they return to their original abode at Puri.

The next attack was undertaken by one Keso Das Maru, a Hindu commander and an important officer under Hasim Khan, the first Subedar of Odisha. He invaded the Puri temple. The annual car festival was underway. He came in the guise of pilgrim and occupied the main temple with his army. The temple became a military cantonment and availing the opportunity plundered the temple treasury in the year 1610 CE. It is estimated that Keso Das took away ornaments worth 3 crores. Purushottam Dev was defeated and a very offending treaty was made which included that the king will present his daughter to the Mughal Emperor at Delhi. He shall also give his sister in marriage to Keso Das along with a dowry of one lakh rupees. This information seems to be wrong as can the king having an unmarried sister till that time when child marriage was the social custom? There are multitudes of incoherent narratives.

Some scholars opine that again four years after the Makaram’s attack Mirza Ahamed Baig attacked the temple at Puri when he was functioning as Subedar of Odisha Suba.

Madala Panji records that in the 32nd Anka Mithuna 7th day of Narasingha Dev Amara (Amir) Fate Khan, the commander of the Nabab Matmati Khan’s army captured the royal palace situated to  the south of the temple and slew the king, Narasingha Dev. One Aniruddha Rayapitam helped the invader who took away all the valuables of the palace. This narrative is also highly confusing.

The next attack on the great temple occurred almost 45 years when Divyasingh Dev was the king and this mission was conducted by one Ekram Khan. His invasion was somehow known to the servitors and they had shifted the deities to the Gada Kokala on the river Bhargavi, some 15 kilo metres away from Brahmagiri.

In 1727 CE Ramachandra Dev (II) was coronated as the king of Odisha. He was the 9th king in the Bhoi dynasty. He was very shrewed ruler and a brave warrior. He ruled up to 1736 CE. During his time Taki Khan the youngest son of Sujauddin Mahammad Khan, was appointed as the Subedar of Odisha.  In subsequent period he became the Nawab of both Odisha and Bengal and appointed Taki Khan as the  Nawab Nazim of the Odisha.Taki Khan had one military purpose to attack Khurda and weaken the king thereof. He started his campaign in the year 1728 CE which continued for almost three years with a few breaks.

Even Taki Khan wooed Ramachandra Dev to marry a royal Muslim girl and it is said that the marriage was solemnised. Hindus took this as a conversion of their revered king to Islam though no such proof has yet been established. However, he was barred to enter the Sri Mandir. Taki Khan is remembered as the last invader of the temple.

All narrations that we get till date are mostly in the level of speculations and needs deep study into this aspect of the history of Jagannatha worship. The temple chronicle gives hints but not detailed account. This may be due to recurrent copy of the chronicle that took place as the writers changed from time to time. Temple chronicle has two parts such as the history of administration and account of income and expenditure of the temple. The officer to record the history of kingship is Tadau Karana and the officer to keep the financial record is Deula Karana. These posts are hereditary. Hence we shall have to wait for further research on the topic to get a true picture of these attacks. I have excluded the attack by Makaram Khan: 1617 CE as according to the Madala Panji Makarama attacked  the Khurda palace and broke the image of Gopaljew in the month of December (Dhanu 22 dine).  Also attack by Kalyana Malla has been excluded as this may be better to presume that he was with Keso Das but not an independent attacker.