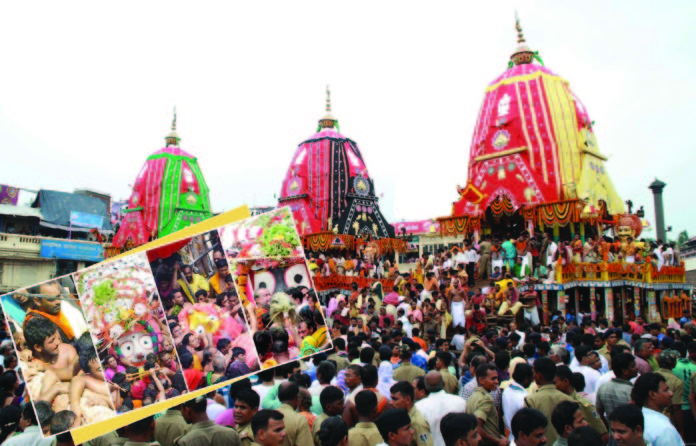 Nandighosa will roll on with unabated zeal on the paved and secluded Grand Road of the devotees’ heart beckoning Lord’s dear devotees, all Salbegs and Dasias as they are already in receipt of Lord’s secret ajnamala. Ageless is the secret agreement between You and Your dear devotees, O Lord. Distance, pandemics and prohibitions can never deter Your devotees from viewing You in their heart within.

The Chariot  Festival of Lord Jagannatha  is said to be a self-chosen festival of the Lord
which had commenced in the       12th Century and is continuing till date, of course barring aside a few intervening years on account of the temple-exploitation by alien political rulers of India.

The Chariot so meticulously made with utmost devotion and workmanship by a retinue of carpenters appears as a mobile temple, or a temple on the wheels. Annually three chariots with prescribed disproportionate height are made for three deities and Chakra Sudarshan is placed in goddess Subhadra’s chariot as her companion.

These three Chariots, i.e., Taladhwaja (of Lord Balabhadra), Darpadalana (of Godddess Subhadra) are of various sizes and draped in three distinguished coloured fabrics. Chariots are yoked with wooden horses, kept at the command of three wooden Charioteers. The Cars or Chariots are made to park before the Lions Gate of the temple for their scheduled journey to the Gundicha Temple-covering a distance of about three kilometres on the Grand Road. The journey commences on the 2nd bright lunar day of the month of Asadha. The deities dismount from their respective Chariots at the front yard of the Gundicha temple and are ceremonially ushered into the Gundicha Temple where they sojourn for Seven days. Millions of devotees visit them and partake of the Mahaprasad, specially prepared in the Gundicha House.

On the ninth day, the deities commence their return journey in their respective chariots amidst a concourse of devotees. Back to the front yard of Shri Mandira, the Chariots park there for about three days for observance of deities’ royal deportment (Suna Vesha), offering of scented drink (Adhara pana) and finally the   Niladri Vije or triumphant re-entry into the sanctum sanctorum.

The ritualistic Ratha Yatra has a direct link with Deities’ celestial bath (Deva Snana) on the open platform in the temple premises. Elaborate bath makes them sickly and they are kept in isolation for about a fortnight from the night of the full-moon day of the lunar month of Jyestha. The deities are given massage with medicated oil, sandal wood paste; ayurvedic medicines specially prepared by the Temple Physician and are kept under strict surveillance of Daitapati Sevakas during the anasara (period of sequestration) period. The deities remain on strict diet. Strict silence prevails inside the temple so as not to disturb the ailing deities.

After the two-week sequestration and prescribed medication, the deities reappear with unusual gaiety and flamboyance for their jolly ride on their respective chariots.

Once a year the Lord quits his bejewelled throne (Ratna Simhasana) and appears on the Grand Road where a concourse of people irrespective  of caste, colour and religion greet Him with joyous ovations. The innate devotees in the crowd instantly start an intimate mute dialogue with the Lord, majestically seated on the Nandighosa Chariot. This propitious hour is also best utilized by the devotees who have not been able to come to Srikshetra. They stay home, glue to the TV screens, hear the commentaries and earnestly feel that they have been transported to the Grand Road, Puri and have become a part of the eager crowds.

The present Holy Trinities are six-year-old. They were shaped in 2015 during the  epoch-making Naba-Kalebara. After the ritualistic exchange of the Brahma Padartha, they were installed on the Ratna Sinhasana without affecting continuum   or perpetuity. Yet a few had expressed their anxiety and were filled with a sense of foreboding regarding the first Nabakalebara of the 20th Century. The year Twenty Twenty is phenomenal. It behaves as the Chief Emissary of Lord Jagannatha,  At  His behest the outer precincts of Shri Mandir have been cleared off mess and encroachment. Shri Mandir with the Divine Flag (Patitapavana Bana) atop is gracefully towering the sky and is being venerated by devotees from a long distance. The Lord is overseeing all around with the Flag on the temple spire. The Grand Road now really appears grand and majestic and environs are serene indeed.

Inscrutable are the ways of God. At times He is awe-inspiring. He is the Lord of the universe, Jagadeesha-Jaganatha-Brahmanda Thakura. The pandemic has let loose all its intensive artillery in His manifest universe. Almost all the countries in the world are now shivering. Human aspirations are belied. Are You, O Lord, still unmoved and apathetic? Who could decode your intricate design? Bridges are falling down. How could You be reached?

This year, O Lord, You chose to enact your jolly cruise in the temple premises. You celebrated Your celestial bath in a guarded way without being witnessed by your multitudinous devotees. Your faithful servitors have raised your chariots with utmost devotion and workmanship. Hark! These Chariots are lining up before the Lions Gate.  Have You alienated all Your devotees. The unprivileged are forever blessed. They will witness your triumphant ride, may be, not on the Grand Road, but on the subtle road of their heart that leads straight to you without any impediments whatsoever.

Nandighosa will roll on with unabated zeal on the paved and secluded Grand Road of the devotees’ heart beckoning  Lord’s dear devotees, all Salbegs and Dasias as they are already in receipt of Lord’s secret ajnamala (divine garland, incensed with Lord’s sweet permission). Ageless is the secret agreement between You and Your dear devotees, O Lord. Distance, pandemics and prohibitions can never deter Your devotees from viewing You in their heart within.

The twentieth Rathajatra of the Twenty first Century in Sri Dham-Puri will be a unique and historic one as it is going to be witnessed predominantly by denizens of the heaven, of course, in the company of all devotees in absentia. The three chariots or consecrated wooden temples on wheels shall be pulled by strange pullers in an innovative divine strategic device. 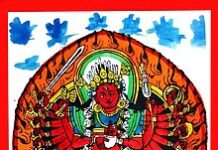 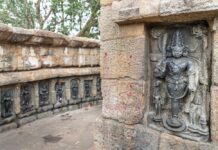