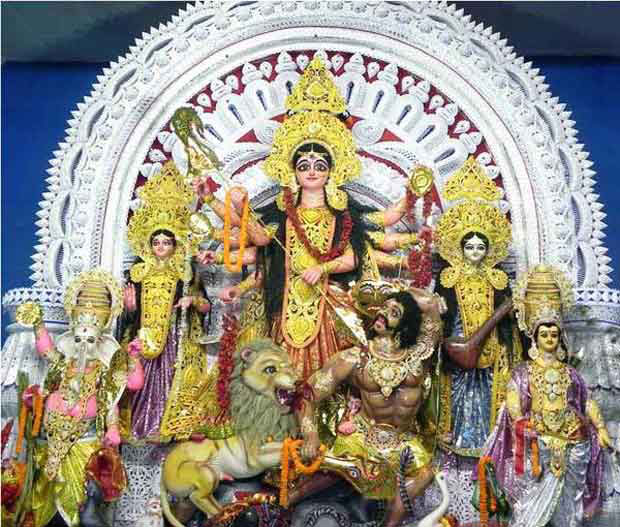 Sharadiya Durga Puja  or autumnal worship of goddess  Durga is a customary  ritual in India, celebrated both with austerity and jubilation. Goddess Durga is the supreme Feminine Energy, known as Yogamaya or Vishnumaya or MahaKali who was in existence at the dawn of the creation of the manifested universe. It was She who awakened the indifferent, attributeless  Parama Brahman to crush the evil forces, surfaced as Madhu and Kaitabha and to rescue Brahma, the creator from their clutches.

The creation was shaped. Five cosmic elements aided the formation of the New Universe. The evil forces became pro -active. In various forms, the evil forces tried to torment the universe and the safe abode of gods. Gods bewailed and sought protection from  Mahamaya. The evil forces appeared in mid-India, particularly in the Vindhya region in giant forms like Durgama asura and Ghora asura. They engaged Mother Durga in a fierce battle and were finally crushed.

One demon Rambha by name sought divine blessings for begetting a child through his penance by remaining inside the water in the river Panchanada. Brahma was pleased with his penance, blessed him that he would be blessed with a son who would be all powerful. Rambha returned to his palace with enormous joy. On the way, he met a young she -buffalo and had unnatural sex with her who delivered a male child, and that was Mahisasura. Mahisasura when grown- up, repaired to the Himalayas and engaged himself in a severe penance with the intention of becoming immortal. This time Brahma too, appeared before him. Humbly the demon prayed, “Bless me with a boon so that I will be immortal”. Brahma declined as it was not within his powers.He,however consoled him and awaited an alternative prayer from the demon .Mahisasura requested Brahma that he be pleased to grant him a boon so that he would not die in the hands of fellow demons, animals, gods and male human beings. He said he did not count any woman as his adversary .Smilingly Brahma granted his prayer.

Mahisasura became extremely powerful. He drove away all gods including Indra from the heavenly abode. Gods fled in fright, conferred among themselves and went to Lord Vishnu and Shiva for help. When they heard from the panic-stricken gods, they appeared furious. They exuded unprecedented divine rays. Other divinities who were present there, in the hermitage of Seer Katyayana also exuded their rays .Lo! what a miracle! From the confluence of rays a deity emerged with flamboyant appearance .All gods-Shambhu, Vishnu, Yama, Sury , Chandra, Indra, Varuna, Brahma, Eight Vasus, Kubera, Prajapati, Agni, Air, Visvakarma, the Earth, the Himalayas etc, decked her with various ornaments and lent her their patent weaponry. The Ocean, the Milky Ocean and the serpent -king also participated. The Himalayas gave her a powerful roaring lion, Lord Vishnu a disc and Kuvera an inexhaustible wine vessel.

Mahisasura, now the usurper of the heaven, got to know the divine conspiracy.  He immediately summoned his council of war chieftains and passed an order to his war commandants, Chikshura and Chamara to make all arrangements for the battle in a war-footing basis, Thousands of chariots soon appeared with multitude of demonic soldiers. The Devi mounted on her Lion and holding deadly weapons in her eighteen hands fought bravely and demolished numerous platoons of rival soldiers.

Finally she caught hold of Mahisasura, climbed on his back and subjugated him. The demon was shifting his shape. He became a lion, then an elephant and then a warrior well-armed. Finally, the demon died on the 9th lunar day of the bright fortnight of the month Asvina .This, in brief, is the emergence and dissolution of evil forces that took the shape of a deceptive minimal.

Invocation to goddess Durga in the month of Asvina is looked upon as an innovative attempt to awaken the goddess when she is supposed to take rest. It is said that during the Dakshinayana  (between summer solstice and winter solstice for a period of six months)all gods enjoy rest, and during the other half of the year, they become fully awake. On unusual circumstances they are awakened. Sri Rama, it is said, requested Lord Brahma to awaken the goddess so that he would seek her assistance for the slaying of Ravana. Brahma arranged this propitiary ritual by invoking the goddess on the sea-coast of Lanka in the bright fortnight of the month of Asvina and  Ravana was killed on the 9th day of the of the bright fortnight of Asvina. The day following was observed as Vijaya Dashami. In many northern states of India, the clay image of Durga including her associates is taken out from the structured platform for immersion either in the flowing waters of a river or in the still waters of a pond or lake in a community porcession. Vasanti Durga Puja which is called kalavodhita (usual period, whereas autumnal awakening is akala vodhiba or unscheduled awakening).

In the voluminous Odia Mahabharata, composed by Saraladasa, we find the mention of Chandi -Durga in twelve major places, starting from the Vindhay mountain to the image of Bhagavati at Banapur. He mentions Sharala-Chandi at Jhankada, Mangala at Kakatapur, Ramachandi at Konark, Vimala in the precincts of Purusottama –Jagannaath, Samalai or Samaleshvari at Sambalpur, Gouri at Bhubaneswar and also Hingulai. Odishan temples mostly dedicated to lord Shiva house Mahisasura- mardini with various forms and variant arms, as the Parshva devata, enshrined on the northern  side of the temple .In Bhubaneswar itself, we find Mahisasura- mardini Durga with four arms (Laskshmaneswar temple) six arms (Parasurameshvar temple) and with ten arms in the Sisireswar temple. But else when we find the deity either with four arms or eight arms.

Married women in Odisha observe Asvina Sukla astamj as Durgastami and also the Sandhipuja  on the following night. Durgastami is said to be very auspicious. Earlier sacrifices were offered to the deity, even a bufflao was sacrificed which was replaced by goats, rams and hens during the three-day ritual starting from the Saptami. Now of course, it is replaced by water melons, cocumbers & the like.

Goddess Durga is adored with various epithets .Though primarily she is Parvati or Kali she is Mahalakshmi, Mahasaraswaati, Chamunda, Gouri, BhadraKali, Maheswari, Ugratara,  Mangala, BanaDurga, Kausiki, Mahamaya Nanda, Satakshi, Shakambhari, Bhima and Bhramari etc,. She is the primordial force-incarnate. Her very name denotes that she is the slayer of durgati or misfortune, she ensures safety to her devotees and grants material prosperity. Her weapons, mostly club and swords are worshipped In odia households the stylus (Lekhani), sickles, swords etc, and the old weapons used by Odia Paikas (agricultural Militia) are also worshipped for three days.

Durga puja or Dasahara coincides with Navaratri puja which is elaborately conducted in North India, after the newmoon day (Asvina Amavasya) right  from the  Shukla Pratipda to the navami or 9th night. Goddess Durga is invoked in her nine different appearances, eg Shailaputri, Brahmacharini, Chandraghanta, Kusmanda, Skandamata, Katyayani, Kalaratri, Maha Gauri and Siddhidatri, In most of the metros and in countryside folks observe this puja with all earnestness. What can be a major spectacle than the heroic effort of crushing the evil forces ? No doubt, it is a festive occasion to rejoice the triumph of peace and amity over all negative forces that threaten the humanity.

Columns Rajkishore Mishra - August 21, 2021
0
One may find a request at the bottom of the social media message - ‘Pl circulate to as many contacts as possible’! And within...