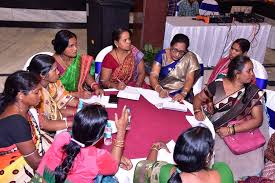 The SHG movement has brought radical changes in the mind set of rural women. The shy and veiled women are now free from that psychological barrier of coming out and becoming vocal for their just rights. Even they are now actively participating in the pallisabhas and placing their opinion for village development.

The concept of Self Help Group has already become three decade old in our country as well as in our state. During this journey period, it has undergone many changes and has become a movement rather than a concept. The journey has covered the distance of purpose neutral to micro investment planning during this period.  As on31.03.2019 there are more than 1 crore SHGs covering 12 crore families in India. Our state which is championing the causes of SHG is also having 6 lac SHGs covering 70 lac family members.

In the year 2013, for the first time our state government decided to extend subvention to SHGs up to Rs.3.00 lakh loan. Now it has come down to zero percentage up to Rs.3.00 lakh provided if the repayment is regular and prompt. In spite of interest fee loan up to Rs.3.00 lakh, much progress has not been made in the quantum of loan extended to SHGs. So far the average loan out standings of women SHGs in Odisha is around Rs.0.66 lakh. During the financial year 2019-20, the average increased substantially by the sanction of new loan to nearly 1.5 lac groups amounting Rs2307.93 crore with an average of Rs.1.54 lac. During Covid 19 situation also banks have extended loan to 41355 groups amounting Rs. 644 crore at the same average. If we will go to number of groups formed having accounts in banks and number of groups linked to credit in banks, a huge gap will be observed. Out of the credit linked groups only 1.62 lakh numbers of groups which is a little more than 50% of the total groups linked have become eligible for interest subvention which means the others groups are not regular and prompt in their loan repayment which has led to classify those accounts as NPA increasing the NPA percentage to as high as 18.27% much higher than the national average.

Odisha is the first state in the country which has created a separate Mission Shakti department to work exclusively for around 70 lakh rural women associated with 6 lakh SHGs. Mission Shakti has so far established SHGs as a flagship programme of the present government in giving economic empowerment of rural women. Adding another feather to the cap of Mission Shakti, a SHG member have been sent to the parliament of our country, which shows the determination and commitment of the government towards woman empowerment. Further the government has also decided to extend collateral free loan to the eligible groups up to Rs20.00 lakh which will be definitely on the basis of the micro investment plan of the groups.

During the past thirty years of SHG concept, though we have made much progress in SHG but a lot is yet to be achieved. The primary intention was to empower the women economically so that they can supplement to their family income. Once the family income is increased, the rest indicators of development like health, nutrition and education will automatically follow. Besides the poverty stricken rural woman can also be able to break the shackle of poverty and come to a sustainable economic level. The development migration can be made in three stages like from beneficiaries to borrowers and from borrowers to entrepreneurs. In the beneficiary stage they will be provided with support, subsidy and subvention. After initial nurturing and hand holding supports, they can come to borrower’s level, where they will be availing bank loan and will be able to repay their loan without any subsidy or subvention.  If any member successfully completes the second stage she can go to the entrepreneur level where she will be able to create employment opportunities for others.

During this three decade journey of SHG, we have never made any enumeration about the economic upliftment of the members of SHGs and how many of them have really crossed the poverty line. The aim is not keep the poor always poor but to take them away gradually from BPL to APL. It can be admitted without hesitation that the SHG movement has brought radical changes in the mind set of rural women. The shy and veiled women are now free from that psychological barrier of coming out and becoming vocal for their just rights. Even they are now actively participating in the pallisabhas and placing their opinion for village development. There is no doubt that such types of transformation among rural women has been made possible only by SHG movement and the catalyst role played by it. Now when the ground is ready, Mission Shakti has to play vital role in transforming their economic life by bringing them out from the below poverty line to sustainable economic entities.

Going by the past performances of SHG in handling mid-day meal scheme, supply of nutritious Chatua (Sattu) to pregnant women and various other works handled by the groups and the most recent challenge of supply of mask during Covid 19 accomplished by them, there is no doubt about their entrepreneurial capacity. Given scope and proper guidance, many members of SHGs can prove them as good entrepreneurs. As much time has already passed, now Mission Shakti should start enumerating SHG members who can be converted to stand alone entrepreneurs.