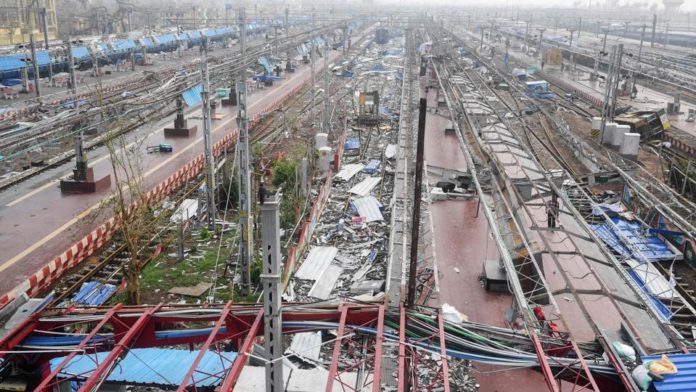 Cyclone Fani has been one of the worst and most powerful to hit the state. It has left behind a trail of death, destruction and misery. Thousands of people are still crying out for relief. There are massive power cuts and even pure drinking water is luxury. The state will take time to recover from the tragedy.

Some events leave an indelible impression on the mind. Cyclone Fani that struck the Odisha coast on May 3 is one such incident. It has left a trail of death and destruction in its wake.

The gale had its maximum impact in cities like Bhubaneswar and Puri where people are still trying to recover from its blow. A large number of people in Puri district are still living in the open with their houses destroyed. “We are forced to live in the open as the cyclone has damaged our house. It has also flattened the coconut trees in our orchard. That was our only source of income. We don’t know what to do,” said Ranjan Das at Satsankh village, along the Bhubaneswar-Puri highway.

Cyclone Fani has wreaked havoc on the lives and livelihoods of thousands of people in Puri’s nut-growing belt, stretching Satsankh to Sakshigopal. Selling coconuts and making ropes out of coir have been the mainstays of the area’s economy, which lies in tatters in the wake of the cyclone which hit this region the worst.

Driving along National Highway 306, all one can see the massive destruction with acres of coconut orchards flattened by Cyclone Fani. The gale had made landfall on May 3.

Visitors to Puri often enjoy tender coconuts on the way. It has been a routine for them. But one can now see desperation on the sellers’ faces. “There is no point bargaining now. We want to finish whatever we have because there are no coconuts left in the trees now,” said a coconut farmer trying to sell his stock in Sakshigopal.

The scale of destruction caused can be gauged from the number of uprooted trees, electric poles and billboards scattered along NH 306.

Villagers in areas like Pipli, Satsankh and Sakshigopal have taken the initiative to clear the roads themselves, by removing fallen trees and electricity poles, as the administration continues to struggle.

Tourism secretary Vishal Dev recently held a meeting with town’s hoteliers and energy department officials in a desperate bid to revive the tourism business, which had been the biggest casualty of the calamity. He assured the best possible cooperation from the government to the hotel industry.

The 12th-century Jagannath temple, the town’s most famous landmark, has also suffered, with only a few pilgrims visiting the shrine. Water crisis had affected the functioning of the temple, though mahaprasad is being cooked as usual. “We are using water from two wells to cook the mahaprasad. But we are not getting enough water for our other needs,” said a temple sevayat.

Thousands of power workers and public health engineering organisation staff are working almost around the clock to normalise power and water supply in the town, but the task is too large to be achieved in a few days.

Destruction has been equally massive in Bhubaneswar but here some people are trying to make money out of the crisis. Both government agencies and private agency workers have been demanding a cut to help people. Many areas in Bhubaneswar are still without power though water is now available. But there is a fear that diseases may spread.

Making comparisons is odious but they are bound to be made. People, who either seen or were the victims of 1999 super-cyclone, are already comparing it with Fani which wreaked havoc on the state’s coast on May 3.

It is being pointed out that the scale of casualties was much bigger in 1999 with around 10,000 people dying according to official estimates. In worst hit Ersama and other parts of Jagatsinghpur district bodies were littered on village roads making the task of relief and rescue workers that much more difficult.

A large number of cattle had also perished in 1999 triggering a temporary milk crisis in some of the affected areas. The gale with wind speed reaching 300 kms per hour was almost as destructive as Fani flattening houses, electric poles and huge coconut plantations. It had blown away everything that came in its away.

Fani’s wind speed in comparison was much less, the maximum being 210 to 250 km per hour. But the big difference was that while the effect of the wind during the super-cyclone had tempered by torrential rains that accompanied it, this time it was the raw force of the wind that caused maximum destruction. Rains, in fact, followed the wind instead of accompanying it.

All this notwithstanding it is inhuman to make comparisons between two tragedies. The scale of casualties may have been much higher in 1999 but human misery brought about by Fani is almost of the same level, if not more.  Thousands of people in the affected villages and even towns like Puri are still crying out for water and electricity.

Restoring the power infrastructure, in fact, is the biggest challenge that the state government faces in the wake of Fani. Parts of Bhubaneswar, where power is yet to be restored fully, have witnessed a riot like situation with people attacking electric sub-stations where now police have been deployed to ensure the safety of employees.

Rescue and relief workers from outside the state have pitched in and Odisha government must thank them for working round the clock to bring the situation back to normality. There are, of course, complaints of lack of coordination and shortage of vital electrical equipment without which restoration work cannot move forward.

The state bureaucracy has been making all kinds of claims in what appears to be a massive PR exercise. But any such exercise, unless backed by solid proof, has the potential to backfire which could cost the government dear at this juncture.

It is good that Centre has chipped in with timely help. The Prime Minister was magnanimous enough to announce immediate financial assistance for Odisha. He also made an aerial survey of the affected areas alongwith the chief minister and then heaped praise on the latter for saving many precious lives by mounting a timely evacuation operation. The chief minister returned the compliment.

Many observers have seen politics behind this exchange of praise between Prime Minister, Narendra Modi and chief minister, Naveen Patnaik. But one should not always see things through the prism of politics.