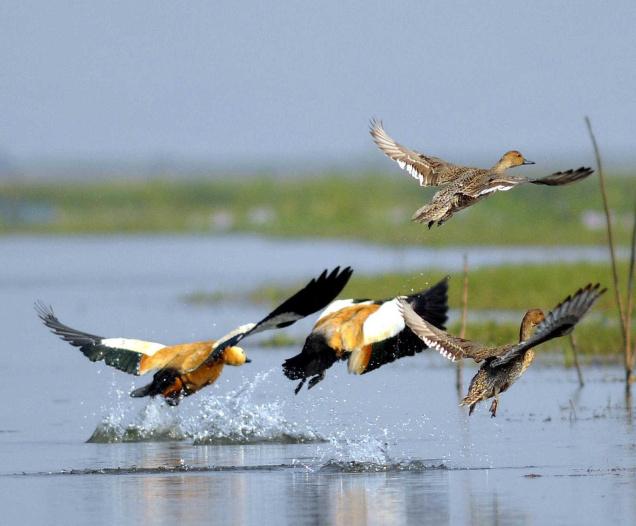 The Nalabana Island, which was declared as a wildlife sanctuary since 1987 and spread over 15.2 square kilometers is too small for the entire population of birds to forage daily. Hence ornithologists have suggested creation of another island in Chilika exclusively for migratory birds.

Experts would like another island to be developed in Chilika exclusively for migratory birds. Asia’s largest brackish water lake is one of the best known wintering grounds of migratory birds in the world.

Sources said Bombay Natural History Society (BNHS), a wildlife research organization, has recommended creation of another island in the Chilika lake to provide more roosting and foraging space for migratory bird species. The organization, which conducted a survey on the migratory birds between 2001-02 and 2014-15, also recommended undertaking habitat improvement/restoration for birds.

The BHNS recently submitted a detailed report to the state government. The report stated that the Nalabana Island, which was declared as a wildlife sanctuary since 1987 and spread over 15.2 square kilometers is too small for the entire population of birds to forage daily. “Decline in counts of birds over the years probably indicates that food resources (both plant and animal food) and the area available may not be sufficient to meet the biomass requirements for return migration. Hence it is recommended to explore the possibility of creating another island for the birds,” said the report. Nalabana is the only legally protected area in Chilika Lake.

The BNHS has also concluded that breeding of birds has faced several disturbances at Panchakudi, Mangalajodi and nearby areas. “Fishermen use this area for drying their nets in which ground-nesting birds and chicks get entangled. Egg poaching by locals is a part of their livelihoods, although over the years this has reduced significantly as more poachers turned tourist guides,” said the report. The research was funded by the World Bank. The report also said that increased fishing activities and presence of gheris (man-made prawn enclosures) have reduced food availability for fish consuming birds and movement of mechanized boats at Mangalajodi as a major hindrance for feeding and breeding of birds.

The organization has also proposed to undertake an investigation to ascertain the reason behind proliferation of grasses at the island. . “The complete abandonment of the nesting colonies of few species also leads to the speculation that it may be due to the changes in the grass growth and change in soil texture,” said the report.

Officials said they have removed encroachment from 3000 acres near the sanctuary area. “A 100 meter radius of the sanctuary area has been declared as buffer zone and fishing activities in the area has been banned. We will strictly enforce the ban,” said an official.   Chilika Lake receives migrants from a wide range of breeding grounds extending from north, central and east Siberia, China and Mongolia, and west Asian countries such as Kazakhstan.  There is nothing like the joy of watching birds in Chilika during the winter.