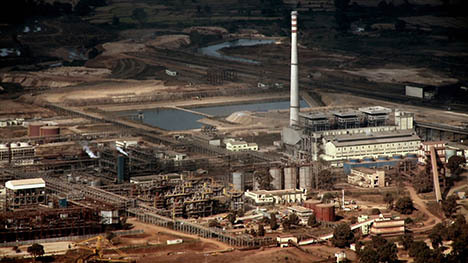 The industrialization in Odisha has turned more or less an empty slogan. The first major blow to the state government on this front was the withdrawal of Arcelor-Mittal from its 12 million tonne project in Keonjhar district citing problems in land acquisition. Similar problems also bedeviled the much hyped POSCO project with land acquisition process witnessing much violence.

Progress on the industrial front was one of the major poll planks of ruling Biju Janata Dal (BJD) in 2004 and 2009 elections which the party won handsomely. Maximum hype was around the POSCO steel project widely perceived to be country’s biggest foreign direct investment.

The industry bubble burst soon after and ever since the industrialization has been more or less an empty slogan. The first major blow to the state government on this front was the withdrawal of Arcelor-Mittal from its 12 million tonne project in Keonjhar district citing problems in land acquisition.

Similar problems also bedeviled the much hyped POSCO project with land acquisition process witnessing much violence. It forced the company to scale down its land demand but even acquiring that much of land was not easy. Finally fed up with protests and violence and the demands raised by the state government the company started exploring options outside the state.

Strangely even the MOU for the project that had expired several years ago could not be renewed as the state government wanted to put new conditions which, it appeared, were not liked by the company which finally backed out of the project leaving the government red-faced.

There was also another angle to the POSCO saga. The state government despite its best efforts could not get the South Korean company the Khandadhar iron ore mines that it wanted. What apparently came in the way was a new central law. In any case the company has decided to walk out.

Things are not hunky dory even in other areas. Vedanta’s alumina refinery at Lanjigarh continues to face a raw material crisis. The company’s bid to mine the Niyamgiri hills having failed owing to an agitation by local tribals, now its hopes of making the refinery viable rest entirely on the support of the state government. It would like the state government to allot it bauxite mines with adequate reserves and a place from where transportation would be economically viable.

Sources said the company has so far only received assurances but nothing concrete has emerged. However, there is no other option for the company but to wait as it has already invested a lot in the state. It just cannot run away. “The ideal situation for the company would be to get a mine with ample reserves and at a location from where it can be carried easily to the refinery site,” said an observer.

Thus the scenario is dismal as far as big industries are concerned. However, things have picked up slightly on the small industry front some areas. But bad news has come from Rourkela with reports that the industries ancillary to the Rourkela steel plant are struggling for survival mainly because of the power problem.

Even independent observers agree that that the state government needs to do much more to improve things on the industrial front. “Unless real effort is made industry may suffer more. The government has to be more sincere and ensure that its efforts bear fruits,” said an observer.