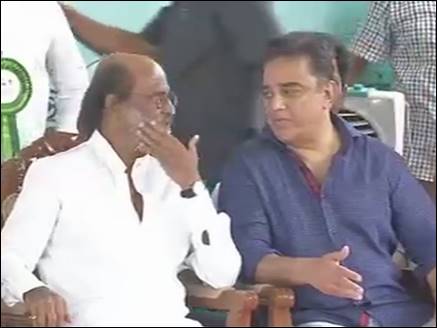 Rajinikanth and Kamal Haasan are the two biggest superstars of Tamil Nadu film industry having huge fan bases. Their announcement to join politics comes at a time of political upheavals in Tamil Nadu following the death of former chief minister J. Jayalalithaa and almost retirement of her arch rival DMK’s strongman M. Karunanidhi. There is definitely a political vacuum.

After keeping his fans and common people of Tamil Nadu guessing for several years, Tamil megastar Rajinikanth announced his decision to join politics on December 31.

Addressing his fans in a large marriage hall owned by him in Chennai, Rajinikanth, 67, said that he would float a political party and contest the next state assembly elections due in 2021. He said that the people of Tamil Nadu were ashamed of the political events of 2016 (the power tussle between factions of AIADMK) and government and system needed to be changed. “This is going to be difficult, but with the support of the people I can do it,” he said.

Rajinikanth’s contemporary and another megastar Kamal Haasan welcomed his move with a tweet: “I congratulate brother Rajini for his social consciousness and his political entry. Welcome, welcome.”

As Haasan had also made clear his desire to join politics weeks earlier, political circles were abuzz with speculations about their imminent rivalry. But on January 6, both the stars surprised everyone with a joint appearance at a fundraising event in Malaysia.

Rajinikanth and Haasan are the two biggest superstars of Tamil Nadu film industry having huge fan bases. It is not known yet if they will join hands or chart out their own separate courses. Their announcement to join politics comes at a time of political upheavals in Tamil Nadu following the death of former chief minister J. Jayalalithaa. Her arch rival DMK’s strongman M. Karunanidhi has almost retired from politics while her party AIADMK is bogged down by severe internal conflict. There is definitely a political vacuum in the state.

So now the questions asked frequently in Tamil Nadu are: can both the superstars make a difference in the state’s politics? Can they step into the shoes of superstars turned former chief minister M.G. Ramachandran or Jayalalitha?

Though Ramachandran, better known as MGR, was the first superstar to be a chief minister of Tamil Nadu, his journey to the top was not easy. MGR was extremely popular among the moviegoers due to his onscreen Robin Hood persona. But in real life, he did not become the chief minister instantly. He first joined DMK under former chief minister C.N. Annadurai and later became an MLA.

After MGR’s death, his protégé and top actress of her time, Jayalalithaa, had to fight it out with other claimants for the leadership of AIADMK including his wife and another film star Janaki Ramachandran. The power struggle within AIADMK helped the DKM headed by Karunanidhi to come back to power in the next elections in 1989. Jayalalithaa had to sit in the opposition for five years before she steered AIADMK to victory and became the chief minister for the first time in 1991.

Interestingly, Annadurai, who was the founder of DMK, and Karunanidhi, who succeeded him, were renowned script writers in Tamil film industry. But at the same time, both were leaders of the Dravidian movement that had become popular among the masses across the state.

But the successes of Annadurai, Karunanidhi, MGR and Jayalalithaa do not mean that all those with connections with Tamil film industry succeeded in politics. Take the case of MGR’s contemporary and equally popular star Sivaji Ganesan. Initially a DMK sympathiser, Ganesan tilted towards the Congress and was rewarded by the then prime minister Indira Gandhi with a Rajya Sabha seat. After 1987, Ganesan floated his own party Tamizhaga Munnetra Munnani in a view to fill the void created by MGR’s death, but failed miserably.

Likewise, in 2005 another popular star “Captain” Vijaykanth floated his Dravida party DMDK and tied up with Jayalalitha’s AIADMK in 2011 assembly elections. He got some electoral success by winning 29 seats. However, when he contested the 2016 elections separately, his party drew a blank with Vijaykanth losing his own seat also.

Though Rajinikanth and Haasan have decided to take a plunge in politics, so far they have not been parts of any political movements or gone through the grinds like MGR and Jayalalitha. Haasan, on his part, has raised his voice from time to time on social and political issues. On the other hand, Rajinikanth has often been criticised for his silence on many vital issues of national importance.

To make a mark in politics, their announcements have to be matched by real action at the ground. Still, it will be interesting to note the next moves by both the icons.