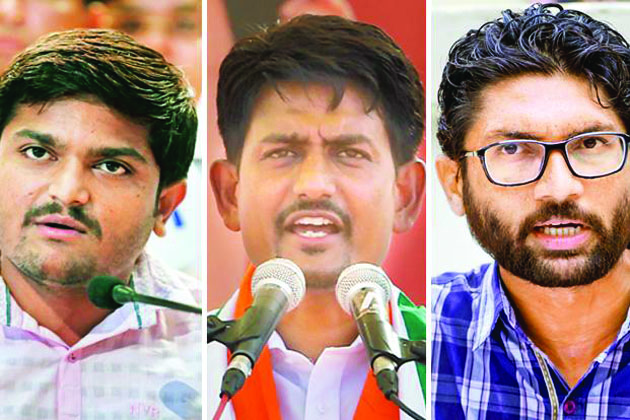 Three youth – 24-year-old Hardik Patel, 36-year-old Jignesh Mewani and 40-year-old Alpesh Thakor – have emerged as big political figures in last two years. They have created an intense anti-government atmosphere and have mobilised public opinion against the BJP by holding rallies and door to door campaigns.

The BJP has been continuously in power in Gujarat since 1998. 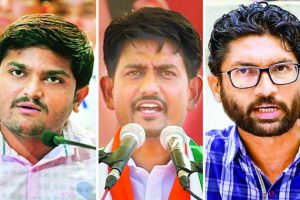 Narendra Modi became the chief minister of the state for over 12 years from 2001 to 2014 and made the party almost invincible.Ahead of the state assembly elections, however, the BJP’s aura of invincibility seems to be falling apart with a belligerent Congress ready to battle it out at the polls. It is to be seen if the Congress can defeat the BJP, but its confidence stems from the emergence of three powerful youth in the volatile political firmament of the state in recent years.

The youth – 24-year-old Hardik Patel, 36-year-old Jignesh Mewani and 40-year-old Alpesh Thakor – have emerged as big political figures in last two years due to sustained movement to protect the interests of their communities. They have created an intense anti-government atmosphere in Gujarat that had been missing in the last few assembly polls by opposing the state government’s “anti-people” policies.  They have mobilised public opinion against the BJP by holding rallies and door to door campaigns for their causes.

Hardik, born on July 20, 1993, is leading the Patidar Anamat Andolan Samiti (PAAS), a social organisation of the politically influential Padidar community that comprises over 14% of Gujarat’s population. The Patidar community has been a strong backer of BJP since it came to power in the state, but of late it seems to be unhappy with the state government.

Son of a small businessman of Viramgam town dealing in submersible pumps in underground water wells, Hardik was an average student but powerful speaker from his student days. He forayed into social activism by joining the Sardar Patel Group, an outfit of Patidar youth in 2012 and three year later formed the PAAS to fight for reservation in jobs for the youth from the community. Within months of forming the organisation, Hardik successfully organised a rally of over a lakh of Patidar youth to pressurise the state government to accede to PAAS’ demands.

The state government tried to suppress the movement by PAAS by arresting Hardik and other activists and beating the protesters. It further alienated the community from the BJP.

Mewani, a lawyer and social activist, is the face of the Dalits of Gujarat who are more than 7% of the state’s population.

Born on December 11, 1982 in Ahmedabad, Jignesh hails from Meu in Mehsana district. A graduate in English literature, Jignesh also holds a post graduate diploma in journalism and mass communication and a degree in law.

He came to limelight after taking up the cause of some Dalits who were attacked in the Una village in Saurashtra by some self-styled cow protection groups. He organised one of the biggest Dalit protest marches witnessed in the state in which more than 20,000 people comprising women and children walked from Ahmedabad to Una. Due to his campaigns the Dalits refused to remove cow carcasses, a traditional practice since ages.

Alpesh, the voice of the state’s Other Backward Classes, is the oldest among the three and has been leading the Gujarat OBC, SC, ST Ekta Manch for the past seven years. The organisation was created in a view to protecting the interest of the OBCs, Scheduled Castes and Scheduled Tribes of Gujarat. OBCs form around 40% of the population while ST another 15%.

Alpesh has also endeared himself among the women by working for prohibition among the OBCs, STs and SCs – among the poorest in the state. He gave the Congress the much needed boost by joining the party on October 23 at a rally addressed by its vice president Rahul Gandhi.

Hardik and Mewani on the other hand have indirectly given the dying party organisation of Congress a new lease of life with their anti-BJP campaigns. The Congress hopes to stitch together a formidable coalition of diverse political forces to kick the BJP out of power in the state.

Not surprisingly, Modi and BJP national president have been leaving no stone unturned to protect their strongest base in the country, and also save own prestige.