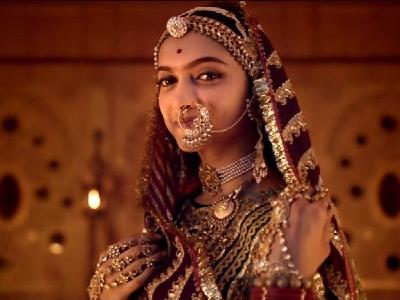 Padmaavat is a well-crafted visual treat with breathtaking sets and magnificent attires and jewelleries. Being a seasoned filmmaker, Bhansali has also drawn excellent performances from the lead cast including Shahid Kapoor, Deepika Padukone and Ranveer Singh.

Padmavaat, the magnum opus directed by Sanjay Leela Bhansali and produced by him along with Mukesh Ambani owned Viacom 18, was finally released on January 25 across the country.Despite the fact that the film could not be shown in several cinema halls in four BJP ruled states, it has done a roaring business garnering over Rs.100 crores in its four-day weekend. This is amazing because many cinema halls did not even display its posters fearing attacks by Karni Sena or affiliated groups, who protested against its release for allegedly depicting imaginary queen Padmavati in bad light.Padmaavat is a well-crafted visual treat with breathtaking sets and magnificent attires and jewelleries. Being a seasoned filmmaker, Bhansali has also drawn excellent performances from the lead cast including Shahid Kapoor, Deepika Padukone and Ranveer Singh playing the roles of Rana Ratan Singh, Padmavati and Alauddin Khilji respectively.

But that is it – basically a masala entertainer, bereft of historical perspectives (how can it be when the character of Padmavati originated from folklore?). It is surprising why the Karni Sena opposed Padmaavat. The contents of the film prove that Bhansali is a natural ally of the feudalistic group that was so vehemently opposed its release.

In fact, Bhansali himself may well have been a closet bigot and fanatic like many upper caste educated people in our country. In the film, he sticks to the Hindutva concept of “Hindu king good, Muslim king bad” propagated by the RSS. He valorises the Rajputs and demonises Khilji. And most importantly, it glorifies the deplorable practice of sati that Karni Sena also takes pride in.

In the present polarised atmosphere in the country, the expensive film made at a cost of around Rs.200 crore is clearly meant to earn big money at the box-office by stoking the majoritarian self-glorification mindset. And that shows in the overwhelming box-office performance of the film in the country.

But the film has also served a purpose outside the ambit of box-office. The film was supposed to be released in the first week of December last year, even as the BJP and Congress Gujarat and Himachal Pradesh were going for assembly polls. A lot of national issues including demonetisation, goods and services tax, and farmers’ plight were being debated in the media.

At such a time, the Karni Sena intensified its opposition to the film. Visuals of activists of Karni Sena hitting the streets not only in Rajasthan but also across all BJP ruled states wearing saffron bandanas and waving saffron flags dominated the television screen, overshadowing all other news of national importance. “Rajput pride” was all pervasive. The producers of the film postponed its release to January 25 but the protests did not stop till the elections in Gujarat were over.

After a lull of few weeks, Karni Sena members resurfaced again just before the release of the film. Its chief Lokendra Singh Kalvi – son of former Rajasthan MLA Kalyan Singh Kalvi, who had supported self-immolation of Roop Kanwar and the practice of sati – warned in television interviews that there would be bloodshed if the film was allowed to be screened in cinema halls. Some women wing members of the feudal outfit announced that they would commit jauhar (mass self-immolation as it was shown in the last scene of Padmaavat) if the film was released.

The state apparatus was a mute spectator of the hooliganism of the radical activists. The police sprang into action after the video of a bus full of children being attacked by anti-Padmaavat protesters in Gurugram went viral in social media. Since then, the protests gradually subsided and more cinema halls started releasing the film.

What made the Karni Sena to protest against the film? Last year, as the protests were gathering momentum, India Today-Aaj Tak news channel did a sting operation on a self-proclaimed leader of Karni Sena, who was trying to extort money worth crores from reporters posing as representatives of the producers for “peaceful” release of Padmaavat (then Padmaavati). When it was being shown on India Today channel, Kalvi, who was inside the studio, disowned the leader saying that he had no connection with Karni Sena. However, this year both were seen together during the protests.

During the protests, it was amply clear that the workers of RSS and its affiliates like Bajrang Dal doubled up as Karni Sena protesters in Rajasthan and elsewhere. Many BJP leaders also supported a ban on the film.

Snatching media space during a crucial election to push real issues under the carpet may be one reason. But, extortion in the name of protests by the fringe groups like in the case of cow vigilantes may be another reason as the sting operation exposed. The film’s producers would not mind if that gives a huge publicity to their product – and indeed Padmaavat has got loads of it. It is also possible that the three reasons may have been in sync to produce desired results to all parties concerned, if one goes by the sequence of events and the final release of the film, with the producers laughing all their way to the bank.PP-February1-15-2018