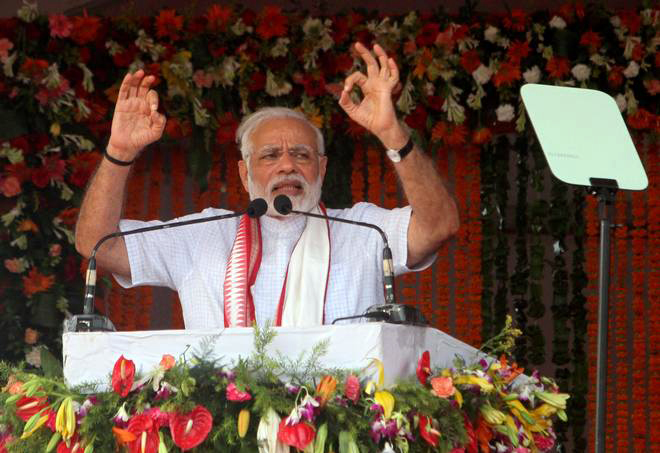 Prime Minister Narendra Modi has already begun the campaign for the next Lok Sabha Elections. Dialogue with the beneficiaries of different schemes of the Central Government through various devices is part of his campaign strategy. Simultaneously, Road Shows, Rallies in different States have been decided.

But for its big win in UP, BJP would not have made it to the seat of power in Delhi. Now the challenge before the party is to retain its 71 seats. Prime Minister Narendra Modi has already begun the campaign for the next Lok Sabha Elections. Dialogue with the beneficiaries of different schemes of the Central Government through various devices is part of the campaign. Simultaneously rallies and programmes for different States have been decided. He is expected to visit Uttar Pradesh almost every month with some big rallies on the cards.

The RSS, too, is playing a role. Sources said recently, there was a coordination meeting between the RSS and BJP in UP, which was attended by chief minister, Yogi Adityanath and other senior leaders of the party. It is possible that the RSS chief directed Yogi to hold the Kumbh Mela on a grand scale next year. The Central and State Governments are also gearing up for the event, which is expected to yield political dividends to the BJP.

In the last week of June, the PM went to Maghar where he inaugurated the Kabir Academy and addressed a rally. Modi has also visited Mirzapur and addressed rallies. Significantly, he has also addressed a conference of business and industry leaders. He is also expected to announce sops for the people of Varanasi, Lok Sabha constituency.

There are those who think that Modi will also hold a rally will in Azamgarh, the old bastion of Samajwadi Party from where Mulayam Singh Yadav is presently an MP. Though he would probably not fight from there this time the place is also significant for the politics of Purvanchal in UP. There might be more rallies of the Prime Minister who is keen to build a momentum that can be sustained till the elections.

On the other hand Congress is playing pressure politics with the RJD in the same way the JD (U) is playing politics with its alliance partner, the BJP. In this game, leaders of the Congress and JDU are helping each other. It started when the Congress in-charge invited Nitish Kumar to join the Mahagathbandhan. Nitish used this opportunity to put pressure on the BJP, but Tejashwi Yadav is well aware of this game and exposed it by directly opposing Nitish.

The real motive behind Ahmad’s statement was to tell the RJD that it had the option of Nitish also. In fact, the RJD leaders are using alliance partners other than the Congress as well. It has brought in Jitan Ram Manjhi’s party, Hindustani Awam Morcha (HAM), but they are asking for five Lok Sabha seats. Meanwhile, the RJD is also in talks with the CPI and CPM. The RJD will leave at least three seats for them, and in this scenario, there is a chance that the Congress will get very few seats. Politics is thus getting both complex and interesting before the next polls.