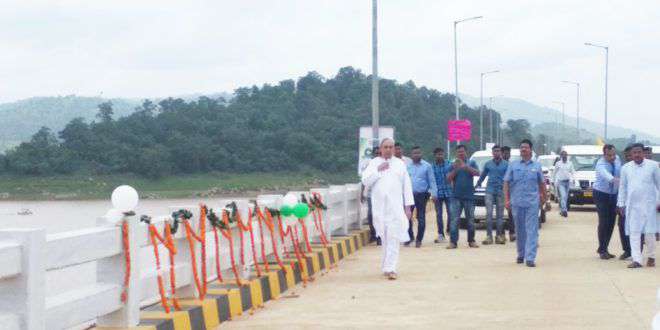 The 910 meter long bridge with a width of 8.4 meters was first conceived in 1986 but could not be completed due to the reluctance of contractors, fearing Maoist attack. Finally the project with an estimated cost of Rs.187. 25 crore took off in 2014 with two platoons of BSF support.

Chief Minister Naveen Patnaik has inaugurated the much-awaited Gurupriya bridge that would connect 151 villages in Malkangiri’s “cut-off” area, a known Maoist citadel, with the district’s mainland.

The 910 meter long bridge with a width of 8.4 meters was first conceived in 1986 but could not be completed due to the reluctance of contractors who feared attack by Maoists. Finally the project with an estimated cost of Rs.187. 25 crore took off in 2014 with two platoons of BSF standing guard at the site round the clock. The third party quality audit was conducted on the project by the Central Road Research Institute.

Dedicating the project to the people of the state Naveen called upon the Maoists to join the mainstream and take the road to development. “Violence is not the solution to anything. Peace is important for development”, said the chief minister.

“#GurupriyaSetu signifies a resurgent #Odisha, will transform lives in 151 villages that were cut-off for 5 decades. It is not just a bridge, it will be the identity & Swabhiman of#Malkangiri. I dedicate this special project to people of #Odisha & India #JaiJagannath,” tweeted Naveen following the inauguration.

On this occasion, he also announced a package of Rs 100 crore for the “cut-off” area of Malkangiri and said that he would monitor the developmental programmes there personally. As the chief minister did the honours around six platoons forces including BSF and strict Voluntary Force (DVF) and Special Operations Group (SOG) stood guard.

The “cut off area’, which got disconnected from the main land after construction Machhkund reservoir in 1960s and Balimela reservoir in 80’s,  has been a safe Maoist haven due to its inaccessibility. Boats were the only mode of communication here.

In the Balimela reservoir, 32 elite Greyhound Commandos from Andhra Pradesh and one constable of Orissa police were killed in a Maoist ambush near Alampekka on June 19, 2008 as the motor-launch that the team was traveling in sunk following grenade attacks by rebels. The cut-off area gained further notoriety in February 2011 when the Maoists abducted the then Malkangiri collector R Vineel Krishna from the area.

Works Minister Prafulla Mallick said, “The Bridge will act as a lifeline for as many as 30,000 people as they all will get connected with the rest of the district.”

Meanwhile, the Chief Minister’s office claimed that Naveen had received unprecedented national recognition for dedicating Gurupriya bridge. “With over 11,000 tweets nationwide, both Gurupriya and Malkangiri have become trending topics on Twitter and are dominating news in the digital space”, it said.

State Congress president, Niranjan Patnaik sougnt to remind people in a tweet that the bridge project was originally conceived by former chief minister, JB Patnaik. “I congratulate the people of Malkangiri and all Odias on the successful completion of#GurupriyaSetu. Today the dream of Shri Janaki Ballabh Patnaik is realized who envisaged the idea of this project. The Congress has always and will continue to work towards connecting people,” he tweeted.