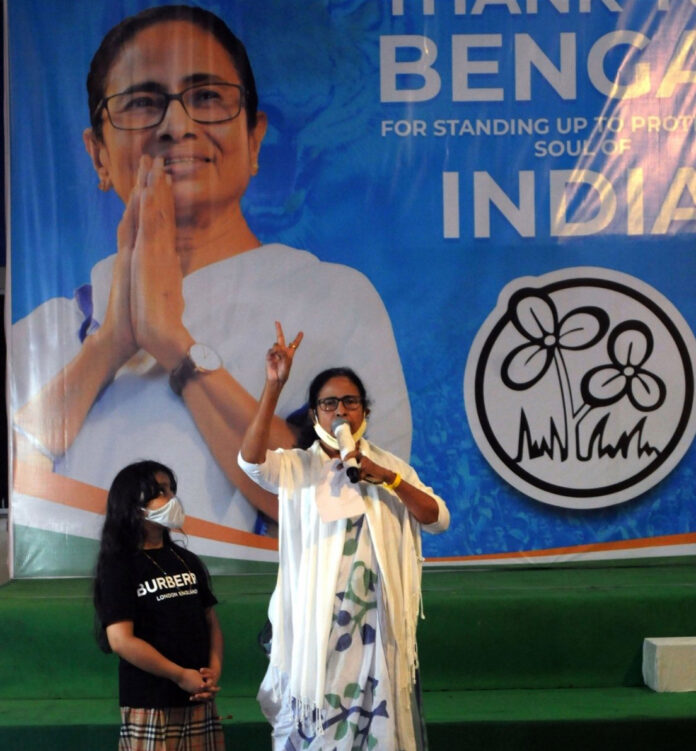 The outcome of Assembly election in West Bengal has dented Modi’s image and charisma. The assumption that Modi’s growing popularity as the Prime Minister can win any battle for his party has been proved wrong. Mamta magic worked again.

There are two ways of looking at it. The massive victory of TMC in West Bengal with its leader Mamta Bannerjee set to become the chief minister for the third time in a row despite losing the Nandigram seat can be described as a setback to BJP in that the saffron party had been bragging about forming a government in the state for the first time. On the other hand BJP has been a big gainer in the state where it has emerged as the main opposition party with a sizeable number of seats, relegating Congress and the Left front into political wilderness, as it were.

But Didi deserves the praise that she is getting from friends and likeminded parties across the country on her spectacular victory. She warded off a stiff challenge from the BJP whose campaign was led by a person no less than Prime Minister Narendra Modi himself. The saffron leadership had pulled out all stops to capture the Bengal prize which, in the end, proved elusive for it.

The party can take solace from its victory in neighbouring Assam, a state where it has retained power with an impressive show. The BJP staved off a stiff challenge from the Congress which tried to highlight issues such as NCR but failed to cash in on it. The truth is that the Congress failed to put up a united show and its allies, too, could do nothing much to dent the BJP’s fortress. The party is also set to form government in the union territory of Puducherry where Congress again flunked because of its internal differences. The saffron party has taken full advantage of it and trumped it.

The other big news comes from Kerala where the Left Democratic Front has set a record by retaining power in the state.  The LDF, headed by Chief Minister Pinarayi Vijayan, is all set to rule again. The chief minister, a veteran, gave all credit to the people of Kerala but said it was not the time to celebrate the victory as the focus has to be on fighting the Covid pandemic. Among others NCP president Sharad Pawar congratulated Pinarayi Vijayan.

In Tamil Nadu The DMK, led by MK Stalin swept aside the challenge of AIADMK and is all set to form the government. It is being seen as the beginning of Stalin Raj in the state. Stalin, however,chided jubilant DMK workers in Chennai as they celebrated at the party headquarters flouting Covid-19 norms. The DMK victory in this Assembly election will bring it back to power in the state after a decade. While the AIADMK is in alliance with the BJP, the DMK had tied up with the Congress. While these two alliances were the top contenders, added to the mix was Kamal Haasan’s Makkal Needhi Maiam (MNM).

However, the verdict in Bengal will be discussed long after the final results have been announced because of the simple fact that BJP through its high voltage campaign had turned it into a Mamta vs Modi battle. So the outcome, one can safely assume, has also dented some of Modi’s image and charisma. The assumption that Modi’s growing popularity as the Prime Minister can win any battle for his party has been proved wrong. In Bengal it was Mamta magic that worked again.