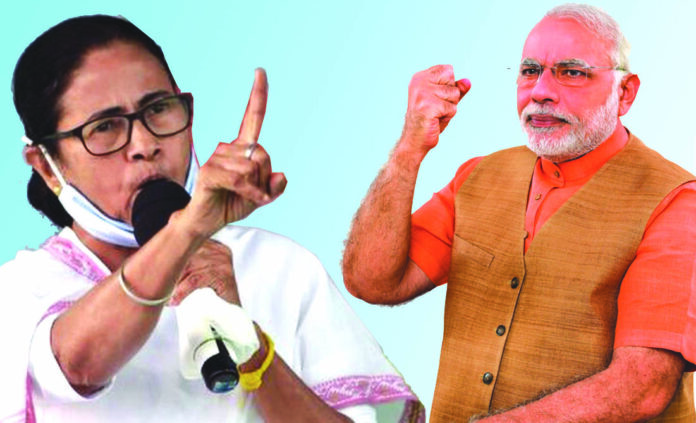 Mamata, who understands the tactics of BJP, is trying her best to prevent the split of Muslim and secular votes by raising the bogey of Hindu majoritarianism. Whether she will be successful in doing so or not; we will know on May 02.

It has been a no holds barred battle between BJP and TMC in West Bengal. It has been all sound and fury. Neither the TMC boss and chief minister Mamta Bannerjee has been restrained in her use of words nor some BJP leaders. Taunts and jibes have been flying around freely. More than being a test of popularity it has turned out to be a test of nerves. To leaders on both the sides have accused each other of inciting violence. The state has seen murders and killings in police firing during polling. TMC leaders believe that central forces are acting at the behest of Centre’s BJP-led government and are out to ensure that polls are rigged in favour of the saffron party. The BJP leaders, too, are levelling the same allegation against TMC accusing it of unleashing violence to terrorize voters.

The role of the Election Commission of India as a neutral umpire in the elections has also been questioned. The TMC and its top bosses have repeatedly accused the commission of acting at the behest of the Centre. Its’ decision to slap a 24 hour campaign ban on Mamata Banerjee was bitterly criticized. This was perhaps the only example of a sitting chief minister being banned from campaigning.

There is no denying that the situation in the state is grim. The entire poll atmosphere has been badly vitiated by the kind of political recrimination that marked the campaigning. The state is like a seething cauldron unlikely to cool down anytime soon. In fact the possibility of post-poll violence is already being discussed and debated

The responsibility for vitiating the atmosphere lies on top leaders on both the sides. Mamata began her campaign on a discordant note accusing the BJP of engineering an attack on her in Nandigram. She tried to make the most of the situation by flaunting a bandaged leg and campaigning in a wheelchair. But soon it was more than clear that neither the injury was serious nor was there any proof of attack having been planned or orchestrated by the saffron party.

But it set the tone for campaigning. She was all fire and brimstone at her rallies and top BJP leaders including Prime Minister Narendra Modi, his deputy and union home minister Amit Shah matched her step for step. Even BJP chief JP Nadda continued in the same vein. Thus the tension that had been seething under the surface for some time came to the fore several times during campaigning and during the polling. Violence took place as expected.

The BJP, no doubt, has been trying to its best to polarize voters in West Bengal in the hope of consolidating its Hindu vote-bank. While it has also sought to create a split among the muslims by promising to “free” them from the “kushashan” (bad governance) of Mamata Banerjee its main focus, as always, has been Hindu consolidation. Mamata, who understands the tactics of BJP, is trying her best to prevent the split of Muslim and secular votes by raising the bogey of Hindu majoritarianism. Whether she will be successful in doing so or not; we will know very soon.