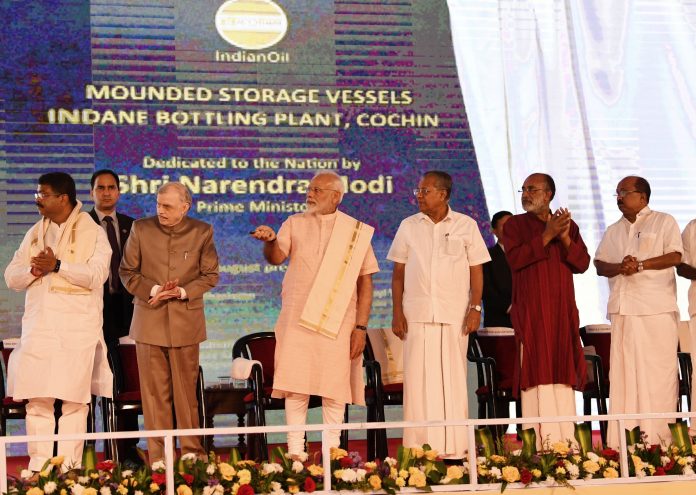 Prime Minister Narendra Modi visited  Kochi , Kerala today and dedicated to the nation and also laid foundation stone for various projects in the state.Among the projects dedicated to the nation include Integrated Refinery Expansion Project Complex (IREP) at Kochi. IREP will be a modern expansion complex and transform Kochi refinery into the largest PSU Refinery in India with world class standards. It will be equipped for production of cleaner Fuels for India. It will double the production of LPG & diesel and commence production of feedstock for petrochemical projects in this plant.

Inaugurating IREP Complex PM said, “Today is a historic day when the largest industrial unit of Kerala is entering its next phase of development. It is indeed a proud moment not just for God’s Own Country, but also for the entire nation”. He also praised Bharat Petroleum Corporation Limited (BPCL) Kochi for playing a critical role in popularizing clean fuels among masses in Kerala and neighbouring  states over the past 50 years.

Talking about the strides made by the Government, PM said Ujjwala has brought cheers to many and nearly six crore LPG connections have reached to the households of the poorest of the poor since May 2016. More than 23 crore LPG consumers have joined the Pahal scheme. The transparency in the scheme has helped in identifying ghost accounts, multiple accounts and inactive accounts. Over 1 crore customers have given up LPG subsidies under Give it up initiative. PM lauded the role of Kochi refinery and said it is making a great
contribution towards Ujjwala Yojana, by doubling the LPG production with the help of the recent expansion”.

PM said that use of CNG a clean fuel is being promoted by expanding the coverage of City Gas Distribution (CGD) network in the country. After the successful completion of 10 CGD bidding rounds more than 400 districts of the country will be connected for providing piped gas supply. The National Gas Grid or Pradhan Mantri Urja Ganga has also been created to have a gas based economy and enhance the share of gas in the energy basket.” He revealed that the Government has thought of developing additional 15000 km of gas pipeline network. Besides , the Government  has reduced oil import by 10% and saved precious Foreign Exchange.

.PM said that India as the second largest oil refiner in Asia is emerging as a refining hub  He congratulated all for the timely completion of IREP, especially the labourers who worked day and night during the  construction. He said that at the peak of the project over 20000 labours were working at the site and they are the real heroes of the project.

He praised the strategic move of BPCL to diversify into non fuel sector through this project. He said, “Friends, petrochemicals are a grade of chemicals which we don’t speak much about. But they exist invisibly and touch many aspects of our daily  However most of these chemicals are imported from other countries. It is our endeavour to see that these petrochemicals are manufactured in India itself.”

He expressed happiness that  Kochi refinery will now be able to produce propylene after execution of IREP.  Besides the other niche petrochemicals will find use in different products such as  paints, inks, coating, detergent and many other articles. He expressed hope that all these many ancillary industries will come to Kochi and business opportunities will be expanded.

PM said that the nation is proud of the works by Kochi refinery. He recalled ,when Kerala was passing through worst floods in a 100 years last August, BPCL came running against all odds to ensure continuous production of Petrol, Diesel and LPG. He added, We are proud of Kochi refinery’s contribution towards nation building but now we have greater expectations.” PM  wished that Kochi refinery leads a petrochemical revolution in southern India and support the of growing needs of New India.

Prime Minister laid the foundation stone of second campus of the Skill development institute set up by BPCL at Ettumanoor. He said, it will help skill development and create employment opportunities for the youth.

PM also dedicated to the nation mounded storage facility by Indian Oil at its Kochi LPG based bottling Plant at a cost of Rs 50 crores. This will enhance LPG storage capacity and also reduce road movement of LPG tankers.