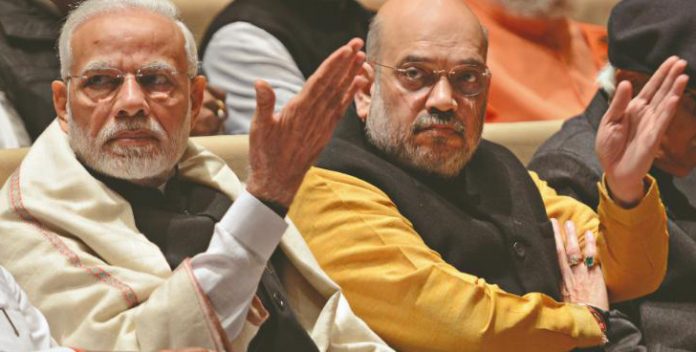 The Bharatiya Janata Party revived the hard-line Hindutva as the core ideology. LK Advani used the Hindutva rhetoric of “pseudo secularism” and “Muslim appeasement” to great effect in winning popular support among the Hindus. The hardline Hindutva politics paid rich electoral dividends in the general elections in 1989. Since then, it has not looked back.

The Bharatiya Janata Party (BJP) under the combined leadership of Prime Minister, Narendra Modi and Amit Shah has managed to widen its geographical reach. It has also established its electoral supremacy in the country. Today it is the most dominant political party of the country.

In the 1984 elections, the BJP had won only two Lok Sabha seats, leading to serious introspection within the party and its ideological mentor the Rashtriya Swyamsevak Sangh (RSS). The electoral failure was seen as proof that the moderate policy of Atal Behari Vajpayee would not work. Vajpayee was replaced as BJP president by Lal Krishna Advani, who promptly revived the hard-line Hindutva as the core ideology of the party. He used the Hindutva rhetoric of “pseudo secularism” and “Muslim appeasement” to great effect in winning popular support among the Hindus.

It was also important that it joined the RSS-backed Vishwa Hindu Parishad (VHP) which was leading the Ramjanmabhoomi movement. Soon, Advani became the face of a country-wide campaign to build a Ramjanmabhoomi temple in Ayodhya where the Babri masjid once stood. The hardline Hindutva politics paid rich electoral dividends in the next general elections in 1989.

In the 1996 general elections, the BJP’s seats in Lok Sabha went up to 161 and it staked claim to form the government as the single largest party, which was accepted. Thus, the first ever BJP-led government was formed under the leadership of Vajpayee but it lasted for only 13 days as it failed to garner the support of other non-Congress, non-Left political parties to muster a majority.

In the next general polls in 1998, the BJP obtained 182 seats in the Lok Sabha and formed a coalition government called the National Democratic Alliance (NDA), which lasted 13 months, finally losing a no-confidence motion by a single vote. Thereafter, in September-October 1999, the BJP-led NDA won 270 seats in the general elections, with the BJP once again getting 182 seats. Vajpayee became prime minister for the third time and his government lasted the full term until the next general polls in 2004.

Thus BJP’s rise to power can be attributed as much to  Advani’s organisational skills as to the party’s return to the Hindutva agenda while keeping the liberal image of Vajpayee alive in popular memory. What further helped the party was the fact that the electorate wanted a change from the long years of Congress rule. Slogans like “Party with a difference” and an appeal to the electorate to give the BJP a chance captured the confidence of the electorate.

The BJP now seems to be in its best phase, a party which can run the government entirely on its own strength but is still running a coalition because it suits its ends. It has a strong Prime Minister and a strong and efficient party president.