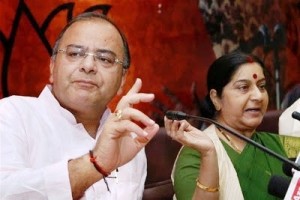 Sushama Swaraj and Arun Jaitley had health problems. Both the leaders were highly respected leaders with oodles of experience. Apart from being excellent administrators they were also great orators. If Jaitley, a brilliant lawyer, could demolish the opposition in the parliament with his irrefutable arguments Swaraj could hold people spell-bound with her speeches at her public meetings.

The Bhartiya Janata Party (BJP) recently suffered a double whammy of sorts. The party lost two of its most articulate and efficient leaders who were friends with leaders cutting across party lines. Both Sushama Swaraj and Arun Jaitley were loved by all.
The feisty and diminutive Sushma Swaraj was one of the most efficient and humane external affairs ministers of the country. She was the first go followed quickly by former finance minister, Arun Jaitley who breathed his last at AIIMS, Delhi.
Both leaders had been having health problems. But still when the end came it left friends and colleagues grief-stricken. The loss, according to everyone, was irreparable. Their sentiments were easy to understand as both Swaraj and Jaitley were highly respected leaders with oodles of experience. Apart from being excellent administrators they were also great orators. If Jaitley, a brilliant lawyer, could demolish the opposition in the parliament with his irrefutable arguments Swaraj could hold people spell-bound with her speeches at her public meetings.
One had the opportunity to witness her oratorical brilliance on a few occasions in Bhubaneswar. The first occasion was when she came to the city with former Prime Minister, Atal Behari Vajpayee, who also happened to be one of her political mentors. The second time was when she campaigned for BJP and Biju Janata Dal alliance candidates when the two parties were ruling the state in tandem.
Sushma’s fiery speeches belied her physical stature. For someone who had not seen her it would have been difficult to believe that such a diminutive person could pack so much of power and fire in her speeches. A pocket dynamo Swaraj left her stamp on whichever ministry she was given charge of during her long and brilliant political career. But perhaps she would be best remembered for her stint as the external affairs minister of the country. She was truly a pro-people minister, always ready to help those in distress. A simple Twitter message was enough for her to take up the cause of people in need.
Her stint as external affairs minister would be remembered by people both in India and Pakistan as even people across the border remain beholden to her for her acts of kindness. Her tenure in the ministry also saw several complex procedures being made easy for which people will remain ever grateful to her.
Jaitley unlike Swaraj was not a great public speaker but he was an excellent debater. A seasoned lawyer he could make his point in the most forceful manner. Backed by facts his arguments were irrefutable and his brilliance as a debater was often on display in the parliament.
Jaitley, however, will be best remembered for his role as the finance minister of the country. It was during his tenure as finance minister that momentous decisions like demonetization and implementation of Goods and Services Tax (GST) were taken. Both the decisions sparked off controversies but ultimately proved to be good for the country. The firmness with which Jaitley backed these decisions and argued in favour of them was remarkable. He also enjoyed the complete support of Prime Minister, Narendra Modi who treated him more as a friend than as a colleague. The party will find it hard to find suitable replacements for them.