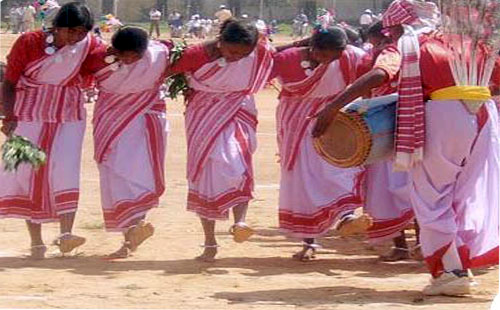 A Karma song says “Life is full of bliss, peace and happiness. We can have  it from the deep blue sky, on the green leaves, from the colourful flowers and fruits, from the springs of the forests, in dance and songs, in love and also from our friendship and togetherness.Never loose heart or break apart. What do we actually get from money and property- nothing. Come, let us sing and dance. Let us spend our life by only dancing and singing. Let us love to the fullest of our hearts.”

The Karma dance of Sambalpur     is also performed  in the districts of Balangir, Mayurbhanj and Dhenkanal, etc of Orissa. The ritualistic dance is associated with some tribal groups, such as Binjhal,Oraon , Khadia, Kisan and the Kolha of the State.At the end of the rainy season, the tribals go to the agricultural fields to tend to the farming requirements for a good crop. It is a time when every body dreams about a better future and like the fields, every body is also impregnated with imaginative happiness. These hopes than, give way to the autumn season, soon to be followed by the much awaited spring. It is the  time, when the sky clears itself and reveals its deepness with rich and liberal splashing of the blue, as if to enliven the life on earth.

The followers of Hinduism, with religious fervor observe the Ekadashi Brata, fasting on the auspicious Sukla Pakhya Ekadashi day of Bhadrab month. According to the Hindu almac, the people of the Western Orissa get ready to celebrate Karma on the same day.

The Godhead of the festivity is Karma Sain, a totemic representation of the divine, as per the traditional religious belief of the local people, especially the tribals. It is thought that worship of the God will bring in good times, since if he is pleased, the fields will be simply filled with abundant healthy crops, free from any defects. The Benevolent spirit can also banish the evils from the villages and take away all the misfortunes, including ensuring a stock of healthy draught animals and cows with plenty of milk to drink.

The tribals usually set up the alter for Karma on the outskirts of the village and decorate it with flowers, fruits, and leaves of various hues available in the forests and especially required for the purpose. At the centre of the podium, a totem in the form of a branch of the karma tree is firmly established by penetrating the lower end of the stem beneath the ground. The Shaman of the tribe, locally known as Jhankar, presides over the religio-ritualistic worship. The Jhankar prays and invokes the manna of the totem to shower blessing on the  people and the village.

The symbolic totem is considered as the moving representative of the principal deity Karmasani, feared and revered by the tribals. The God is offered fowls as sacrifice and locally brewed  country spirit to propeiate it. It is then that the priest invokes the God by describing its power and qualities by traditional religious verses. The assembled children, young and old devotees raptly listen to the poetic sermon that takes them into a frenzy. An exalted gathering soon after ward is served with the sanctified holy wine considered as the Prasad. It prepares the ground for the much awaited Karma dance, which is the monopoly of the young boys and girls of the village, others being excluded from it. In formations, the dance continues for two days, accompanied by the rituals.

During these two days, the entire village remains awake and agog with heightened religious fervour and mirth . One can find groups of young dancing participants enjoying it by their souls, their feet literally remaining above the ground and hearts filled with love. Even though one can find dews on their faces, after dancing days and nights, they appear to be waiting and wanting more and more of it. They also sing the melodious Karma songs as if ready to elevate themselves further and farther.

On the third day, by the knock of the dawn, all of the villagers  together, take the Karma totem  to consign it to the water bodies like river, stream or pond, etc. After taking bath and sanctifying themselves,  revelling people return back in a procession to the village again to participate in a mass feast. As a rule, all of them sit in a line to savour the food, aptly fit for such an important occasion.This is a time, individuals and families forget their bitter past and become friends again. All personal and social problems are completely sorted out to start a new life with a positive note. And as if to prove this, they again dance and sing together in unison.

The main musical instrument used during the dance is called Madal, which is like but not similar to the Mrudang used in classical musical and dance traditions of the Hindus like Nama Sankirtan or Rasalila, etc. The Madal, with a firm body made out of hardened soil is capped, on both sides by treated animal skin. The Madal is bigger then Mrudanga and it produces heavy tones which goes perfectly with the ensuing songs and dances of the tribals. The Mandlia, who strikes the ends of the Madal does so with pauses, increasing or decreasing the notes, to give a heart perpetrating and penetrating effect to the process. Young male and female dancers, locking their hands with each other’s body, dance and sing in few variations, encircling the drum beaters. The feet of the dancers are synchronised with the beats of the Madal, tone and tenor of the song and adjusted in set patterns. The dances progress lineally but vigorously under an open sky and plenty of local wine available around.  The songs are simple which talks of the beauty of nature, the meaning and purpose of life, aspects related to the family and of course, love and courage. The Karma songs are unique in the sense that it is mainly charctrised by the dreams of the young hearts. The songs have existed since time immomerial and handed down to the succeeding generations. The number of the songs is not static but dynamic as new songs are added or the old ones  are modified or expanded. At present, one finds that the anonymous song contributors have  incorporated Hindu Gods and Goddesses like Radha, Krushna, Sita, Ram, along with stories from the Mahabharata and Puranas.

Even though there is an auspicious and specific day for the Karma worship as a totem, the Karma songs and dances continue through out the year. It certainly transcends all seasons and all occasions of life. Or should we say that it is the soul of the tribes? 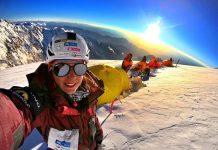 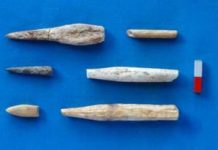