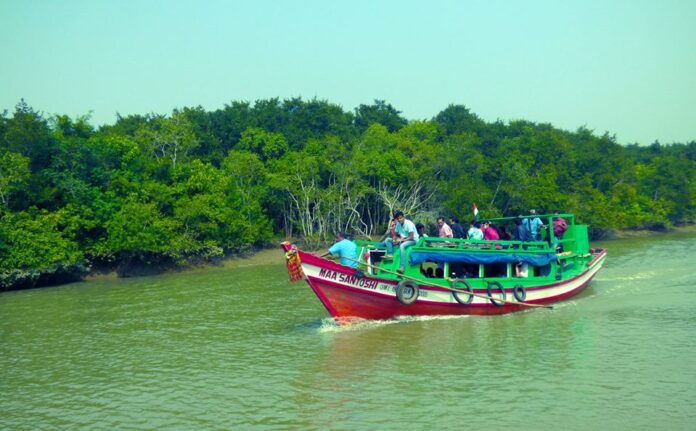 Habalikhati, in Bhitarkanika National Park, is one of the pristine and unexplored beaches of India. Visitors can see hundreds of Dolphin’s marching in sea.

Odisha is the land of famed forests, mountains, valleys, waterfalls, gorges, soaring peaks with stunning wildlife in their own natural habitats. The important wildlife in State are Elephants, Tigers, Leopards, Hyena, Sambar, Spotted Deer, Wild Boar, Giant Squirrel, Crocodile, Jungle Cats, Hornbills, many migratory birds etc. A total of 110 species of reptiles including three crocodilian species, 20 species of amphibians, 479 species of birds, 86 species of mammals have been recorded so far in the State. For Nature tourists looking to experience wild landscapes in a sustainable way, from Camping to Eco-Resorts, from trekking to birding, from sightseeing to boating, Odisha offers something for everyone and the only thing surpasses the beauty of the State; more particularly during COVID times. This time, we are talking about The Bhitarkanika National Park, which houses an estimated 70 per cent of the country’s estuarine or saltwater crocodile population, conservation of which started in 1975.

Bhitarkanika Wildlife Sanctuary and National Park is known as the “Mini-Amazon” of India. The National Park and the adjoining wildlife sanctuary have been accorded the designation of a ‘Ramsar site’, meaning it is a wetland of international importance. Inundated by rivers such as Brahmani, Dhamra, Pathsala, and Baitarani, the forests host the second-largest mangrove ecosystem in India after the Sunderbans in West Bengal.

The Bhitarkanika National Park in the Kendrapara district of Odisha has already reopened for tourists since August 5, 2021. It remains closed for more than three months beginning from May 1 every year keeping in mind the mating and nesting season of the saltwater crocodiles residing there. The national park is home to the saltwater crocodile (Crocodylus porosus), thousands of which are born during the breeding and nesting seasons every year, and, since 2014 onwards, have registered a steady rise in the species’ population over the years. The national park houses an estimated 70 per cent of the country’s estuarine or saltwater crocodile population,.

Lying on the coast of Bay of Bengal, it is the second largest Mangrove ecosystem of our country. World’s largest congregations of Salt Water Crocodiles are seen in the creeks of Bhitarkanika. Sighting of Crocodiles, Spotted Deers, Wild pigs and thousands of colorful birds including winter migrants from central-Asia and Europe is very common here. Eco-tourists can see lakhs of water birds visiting Bagagahana- heronery near Suajore creek from the month of August to October every year. More than 10 species of Herons are seen nesting on thousands of trees. Most of the Birds are Asian Open Bill, Black Ibis, Cormorants, Darters etc. View of Bottle-Nose Dolphin’s, Irrawady Dolphin’s and Finless Porpoise Dolphin’s from different beaches of Bhitarkanika is worth watching. Popular beaches of Bhitarkanika are Habalikhati Beach, Gahirmatha and Pentha Beach. It is also the land of streams, creeks, rivers and estuaries.

Bhitarkanika national park offers the ideal site for setting up camps allowing visitors to be one with nature. For this reason, the government of Odisha chose it as one of the ‘Glamping’ sites for Ecoretreat Odisha 2020. It is one of the 5 luxury camping sites besides Konark, Hirakud, Satkosia and Daringbadi. Dangamal Nature Camp, Habalikhati and Gupti Nature Camps are located inside Bhitarkanika with luxurious accommodations and different choices of cuisine and delicacies. Visitors can make night stays in luxurious rooms of Dangamal Nature Camp.

Eco-tourists have to hire a boat from Gupti/Khola to reach Dangamal. On the glittering white sandy beach, Habalikhati Nature Camp, a beach resort, offers you 9 nos of comfortable rooms facing the sea with all modern facilities. Habalikhati is one of the pristine and unexplored beaches of India. Visitors can see hundreds of Dolphin’s marching in sea. Tourists have to hire boat from Gupti and take 2:30 hrs boat ride along creeks to reach Habalikhati Nature Camp. Gupti Nature Camp, inside the forests of Bhitarkanika and on the banks of river Patasala has 6 luxury accommodations for night stay. It is the Entry Point to Bhitarkanika Sanctuary.

More than ninety varieties of mangroves and its associates are found here. The pneumatophores, better known as breathing roots are another attraction for the tourists visiting the nature Camps. Bounded by rivers on the three sides and the sea on the fourth, Bhitarkanika is criss – crossed by numerous creeks and canals which finally meet the sea and make the estuarine delta. When the tide enters, the forest floats and the water touches the foliage. As it recedes, the multi layer mud deposited on the banks of the creeks gets exposed with varieties of wildlife. The Hawksbill and leatherback turtles, Bibron’s softshelled turtle, salt water crocodiles, King Cobra, Sambar, Chital, Fishing cats, Leopard cats, Mudskippers, Limulus crab etc. are common to the landscape.

Bhitarkanika is Bird’s paradise. More than 170 species of resident and migratory birds, six species of Kingfishers and many more also are seen in large flocks. The beauty lies in its unique natural surroundings. Tide marks on the soil, footprints of wildlife under the unbroken canopy offers splendid view of nature. It is only Marine Sanctuary of the state and is the world’s most important nesting location for Olive Ridleys. Every month of the year brings a unique experience for the visitors, whether you are a naturalist or wildlife enthusiast, Bhitarkanika is all set to entertain and enthrall you. Stay in Bhitarkanika is once in a lifetime, experience to cherish!!

Best season to visit is October-March. Monsoons are just amazing here. Boating in rivers in rain has its own joy. Forest is, however, closed from 14th May to 31st of July. But the wide rivers are enough to keep you glued to place. Bhitarkanika is beautiful even in summer. It should be explored not just as a place where you find crocodiles. It is almost like nature’s paradise. It is quiet, peaceful and green. Above all, it is relatively cool, soothing and pleasant.

Indians Tourists have to pay Entrance Fee of Rs20/person and for foreigners, it is Rs1000. If the number of foreigners is 10 or more in a group, entrance fee per person for them will reduce to Rs200/person. Fee for still camera is Rs50 and for video cameras it is Rs1000.

Tourists may visit Ekakula and Habalighati islands. This is a whole day excursion. World famous Garhimatha, is known as the nesting ground of Olive Ridley turtles. Hundreds of thousands of turtles land here every winter to lay eggs. The turtles, ancient creatures of the deep seas, have been homing in on remote Garhimata every nesting season (January-March) for perhaps thousands of years; it was only a few decades ago that the nesting ground was discovered by conservationists.

A restaurant is available at Dangmal where the tourists can eat only vegetarian foods. No alcoholic drinks allowed here. Best bet is to eat at Riverine Resort. They can give you all sorts of foods – prawns, crabs, fish, chicken, eggs or lamb. They can serve you alcoholic drinks too, but, of course, at a higher price! Green coconut is available. 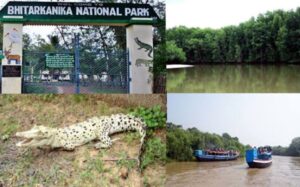 Habalikhati Nature Camp, a beach resort, offers you 9 nos of comfortable rooms facing the sea with all modern facilities. Habalikhati is one of the pristine and unexplored beaches of India. Visitors can see hundreds of Dolphin’s marching in sea. Tourists have to hire boat from Gupti and take 2 and half an hrs boat ride along creeks to reach Habalikhati Nature Camp.

Gupti Nature Camp, inside the forests of Bhitarkanika and on the banks of river Patasala has 6 luxury accommodations for night stay. It is the Entry Point to Bhitarkanika Sanctuary.

Tourists may stay at Pattamundai, Rajanagar and Kendrapada and spend the day time in Bhitarkanika too.