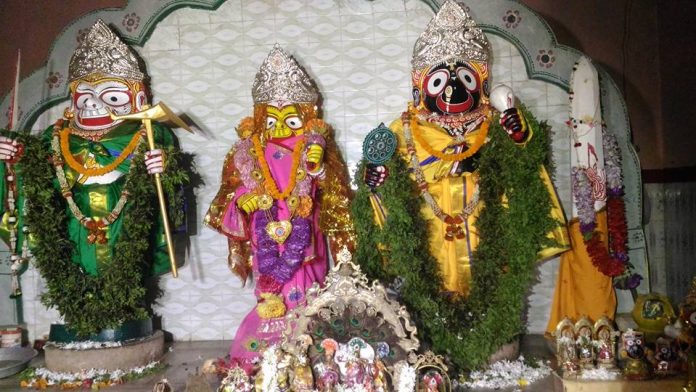 There is a place where you will find Lord Jagannath, Balabhadra and Subhadra’s idols of full stature having full hands and legs. You can’t find such unique structure of these deities in any place in the World. That place is Jaguleipatna- a historical village situated in the district of Khordha.

There are a number of legends about Lord Jagannath and car festival. If we take one instance that how the idols were half-made without hands or legs, we will find a couple of legends going on. As per one of the most-talked legend, the Lord told Indraduymna, the Gajapati King of Orissa in dream that he (the Lord) would float to the sea-shore as a piece of log and directed him to recover the log and make the idols. The King recovered the log with the help of Vidyapati, Basu Sabar and 5,000 elephants. Then he engaged a group of two lakh carpenters to fashion the log into images. But the carpenters couldn’t make any image from the log. They couldn’t even chisel the log, the instruments lost their edges. At last, the King in utter frustration declared that if the idols weren’t built in one day, the carpenters would be beheaded in punishment. Getting no way for any solution, the carpenters prayed to God to save them. Then an old carpenter came and proceeded to make the idols on the condition that he would be allowed to remain inside the temple for 21 days during which, nobody should disturb him. In the beginning, the sound of the carpenter’s tools was heard outside, but gradually the sound became feeble and after four-five days, was not heard at all. Then the queen Gundicha Devi couldn’t resist her temptation and opened that room doubting that the carpenter might have breathed his last. But when she, the King and other Ministers entered the room, they didn’t find the carpenter and the idols were in half-made condition. And the half-made idols were placed in the temple. Some scriptures say that the carpenter was none other than Viswakarma – the carpenter of the Gods in heaven. 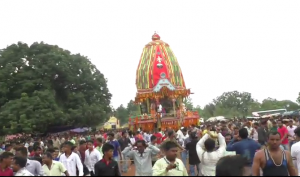 But there is a place where you find Lord Jagannath, Balaabhadra and Subhadra’s idols of full stature having full hands and legs. You can’t find such unique structure of these deities in any place in the World. That place is Jaguleipatna- a historical village situated in the district of Khordha (once upon a time the capital of Orissa). Just 4 kilometers away from Khurda town on the state highway towards Balangir, this place has now become a religious tourist destination. As per the version of the local people, Lord Jagannath has manifested himself here as the ‘Kalki Avtar’ and ‘Shri Shri Aanant Purusottam Dev’. Goddess Jageswari is the worshipped deity of this village after whom the village has been named.

There are a number of opinions and legends about the foundation of the temple and starting of Rath yatra at Jaguleipatna. But according to the majority of them, it was in 1877 A.D., when Gajapati Dibyasingh Dev-3rd was the King of Puri. He was the second son of King of Bada Khemundi and was adopted by Gajapati Bira Kishore Dev-2nd of Bhoi dynasty in 1859. He had the habit of fighting against the Britishers and for such reason the Britishers framed a conspiracy against him under false allegations and deported him to Andaman- Nicober (popularly known as Kalapani) on exodus. After spending 10 years, Gajapati fled away in a ship and reached at Puri. The secrecy of his return was not disclosed. On advice of Rajamata Patamahadei (mother of the Gajapati), Gajapati came to Jaguleipatna with his intimate friend and mentor Ragubar Das, Mahant of Badachhata Matha and an ardent devotee of Lord Jagannath. Both the friends constructed a matha and resided there. The real identity of the Gajapati was unknown to the people and he was popularly known as Babaji Dayanidhi Das as well as Raja Rushi (King Saint). One day he dreamt full-fledged Lord Jagannath, Balabhadra and Subhadra with hands and legs, i.e. Purna Bigraha adorned with Sankha, Chakra, Gada, and Padma. After such secret dream, the holy daru (wood) was collected from the jungle of nearby Beruhan village and the idols were carved in full stature and worshipped in the Matha. After some years, the Rath Yatra was started there. At the time of Rath Yatra, the importance of this place comes into limelight. Thousands of saints from various parts of the country used to come to this place to have a holy visit at the time of Rath Yatra and resided there for months. Due to lack of patronage, the Yatra was stopped in 1915. And in 1930, it was started again. At the time of Rath Yatra, Babaji Dayanidhi Das rendered the chhera panhra service of the trinity. The six disciples of Mahant Raghubar Das namely Atmaram Sidhachari, Janakiram Digambar Urdharena, Suklambari, Baghambari, Paramhans Santh, Baklambari assisted him for the functioning of Rath Yatra. For last couple of years, MP Dr. Prasanna Patsani was doing this holy work. In this Rath Yatra, not only the Hindus but also the Muslims extend their cooperation, which realizes the sense of perfect manifestation of Universal Humanity. 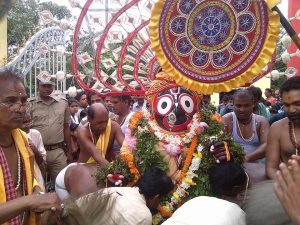 In 1980, a strange thing occurred. In an evening the Matha was caught fire and destroyed, but nothing was happened to the idols, which was a miracle. After such incident, people of Jaguleipatna, Tartua, Saradhapur and nearby villages come together and constructed a concrete building for the idols. In addition to this, a garuda stambha was also constructed in front of the temple alike in Puri. Another characteristic of this place is that every year the chariot is not built in new wood or no Nabkalebar is done for the idols.