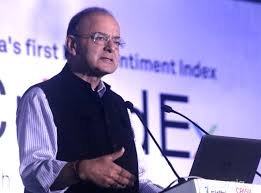 The Union Minister for Finance and Corporate Affairs Shri Arun Jaitley launched CriSidEx , India’s first sentiment index for micro and small enterprises ( MSEs) developed jointly by CRISIL & SIDBI here today.CriSidEx is a composite index based on a diffusion index of 8 parameters and measures MSE business sentiment on a scale of 0 (extremely negative ) to 200 ( extremely positive) . The parametric feedback was captured through a survey of 1100 MSEs in November –December.

CriSidEx will have 2 indices , one for the ‘survey quarter’ and another for the ‘next quarter’ once a trend emerges after few rounds of the survey , providing independent time series data.The crucial benefit of CriSidEx is that its readings will flag potential headwinds and changes in production cycles and thus help improve market efficiencies.  And by capturing the sentiment of exporters and importers , it will also offer actionable indicators on foreign trade.

Delivering his keynote address, the Finance Minister said that the health of MSME sector is extremely vital to the economy and with the number of steps taken by the government in the past 2 years , there is increased integration of MSME sector into formal economy.  Highlighting significant role played by the MSME Sector in the creation of jobs , Shri Jaitley said “ MSME sector is backbone of the economy . It is one of the largest employer in the country and with the vast population where employment either in government or in the large industry itself has limited potential . This is one sector where people not only exhibit their entrepreneurial skills , become part of large value chains but also become job creators in the process. And that  is the reason why a bulk of the jobs in manufacturing , trading have been created in this particular sector .”  Having gone through the series of very major structural reforms in the last 2 years , this is also now phase for consolidation as far as economy is concerned . And this phase of consolidation will also be led by this MSME Sector , the Minister emphasized .