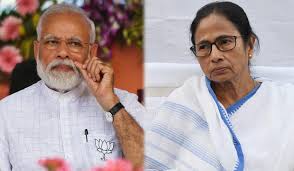 Riding high on its impressive performance in the 2019 general elections in which the BJP won 18 of the state’s 42 Lok Sabha seats, the saffron party has set itself a target of winning over 200 seats in the coming Assembly polls.

It is now more than obvious that winds of change are blowing in West Bengal, a communist bastion-turned-TMC fortress. But this stronghold of Mamta Bannerjee-led Trinamool Congress (TMC ) is right now facing a serious challenge from the Bhartiya Janata Party (BJP). The saffron party’s infallible poll mascot, Prime Minister, Narendra Modi is steadily gaining in popularity in this eastern state. Right now Modi’s two key lieutenants, home minister, Amit Shah and BJP national president, JP Nadda are leading the battle against Mamta who is under tremendous pressure to save her citadel from the saffron surge.

The BJP’s ‘Poriborton Yatra’ (journey for change) in poll-bound West Bengal has been a huge success. It will conclude with a rally to be addressed by the Prime Minister in Kolkata in the first week of March. The fifth and last phase of the Yatra will be flagged off by union home minister Amit Shah on February 18 from Kakdwip in the Diamond Harbour parliamentary constituency and will culminate with Modi’s rally in Kolkata.

Accepting the challenge of TMC in West Bengal, the BJP has stepped up efforts to wrest the state from Mamta and the yatra will pass through the strongholds of the chief minister and her nephew Abhishek Banerjee. The signs of change are visible from the healthy turnout at the BJP rallies which has made the saffron party confident of uprooting the TMC government in the state.  Elections to the 294-seat West Bengal Assembly are likely to be held in April-May this year.

Riding high on its impressive performance in the 2019 general elections in which the BJP won 18 of the state’s 42 Lok Sabha seats, the saffron party has set itself a target of winning over 200 seats in the coming Assembly polls. Party leaders remain confident about storming Mamta’s bastion with Modi’s popularity steadily growing among the voters.

Significantly, the elections in West Bengal come on the back of party’s spectacular victory in Bihar where a BJP-JD(U) government led by chief minister, Nitish Kumar came to power again. The high point of the elections in the politically volatile Bihar was that BJP got much more seats compared to Nitish’s party and even though he continues to be the chief minister of the state the real control will, for all practical purposes, be in the hands of BJP.

The Bihar victory came as a morale booster for the BJP which has taken up West Bengal as a challenge and has its eyes fixed on the entire eastern region of the country including Odisha. With the party already having formed a government in Assam it is now going all out to breach the TMC’s fortress in Bengal. The response to the BJP in the state has been overwhelming in the last few months which is evident from the fact that there have been attempts at disrupting the “ poriborton yatra” on one pretext or the other. The fact is that people of West Bengal are fed up with the negative politics of Mamta which has prevented the growth of the state. They want the state to grow and prosper under the leadership of Prime Minister, Narendra Modi. Finally it is the people’s verdict that will prevail.