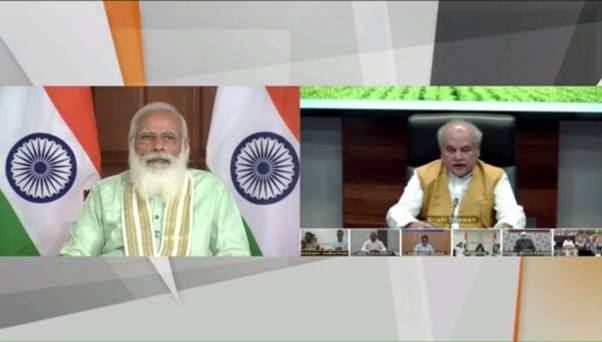 While interacting with beneficiaries of Pradhan Mantri Kisan Samman Nidhi (PM-KISAN) scheme via video conferencing, Prime Minister appreciated Arvind from Unnao in Uttar Pradesh for providing training to young farmers of his region on organic farming and new farming techniques. He lauded Patrick from Car Nicobar in Andaman and Nicobar Islands for doing large-scale organic farming. He praised the efforts made by N Vennurama from Anantapur in Andhra Pradesh for guiding more than 170 adivasi farmers of her region. PM appreciated Revistar from Meghalaya for producing spices like Ginger powder, turmeric, cinnamon, etc in the hilly areas of Meghalaya. He also interacted with Khurshid Ahmed from Srinagar, Jammu & Kashmir who cultivates vegetables like capsicum, green chillies and cucumber organically. Sharing his experience, Balasaheb Narare from Latur, Maharashtra told PM that How Kisan Credit Card helped him to avail credit from bank and how it helped him to increase his farm production.

Prime Minister remarked that the Government is constantly trying to provide new solutions and new options in farming. Promoting organic farming is also one of such effort. Organic farming delivers more profit and is now being practiced across the nation by young farmers. He said that now organic farming is being practised on both banks of Ganga and within a radius of about 5 kilometers, so that the Ganga remains clean.

Prime Minister stressed that during this COVID-19 pandemic, Kisan Credit Card’s deadline has been extended and instalments can now be renewed by 30 June. He said more than 2 crore Kisan Credit Cards have been issued in recent years.

Prime Minister said that this once in a century pandemic is challenging the world, as it is an invisible enemy in front of us. He said the Government is fighting COVID-19 with all its might and ensuring that every government department is working day & night to ease the pain of the nation.

Prime Minister remarked that Central Government and all the State Governments together, are making continuous efforts to enable more and more countrymen to get vaccinated at a rapid pace. He said so far, around 18 crore vaccine doses have been given across the country. Free vaccination is being done in government hospitals across the country. Prime Minister urged everyone to register for the vaccine when their turn comes and ensure COVID appropriate behaviour at all times. He added that this vaccine is an important means of protection against corona and will reduce the risk of serious illness.

Prime Minister said Armed forces are working with full strength to ensure oxygen supply in these tough times. Railways are also running oxygen express trains. The pharma sector of the country is manufacturing and delivering medicines at a large scale. He requested the State Governments to ensure strict laws to counter black marketing of medicines and medical supplies.

Prime Minister remarked that India is not a nation that loses hope in tough times and hoped that this challenge would be overcome with strength & dedication. He warned about the spread of COVID-19 in rural areas as well and urged the village panchayats to ensure proper awareness and sanitation in their respective areas.

On the occasion, Union Minister for Agriculture and Farmers Welfare Shri Narendra Singh Tomar said Prime Minister’s efforts are always in the direction of good governance, improving life style and doubling farmers’ income. He added that under the leadership of Shri Narendra Modi income-centric policies are being framed for the agriculture sector. Describing PM Kisan Samman Nidhi Yojana as the most comprehensive scheme, Shri Narendra Singh Tomar thanked Prime Minister Narendra Modi for the focus on Gaon, Garib and Kisan and also for transferring more than Rs. 20 thousand crores to bank accounts of nearly 9.5 crore farmers under PM Kisan. The Minister also added that the Agriculture Ministry is putting all-around efforts to achieve 100% saturation under the PM Kisan scheme.

State-wise farmer beneficiaries and amount transferred are as follows: Columns ppb - August 21, 2021
0
One may find a request at the bottom of the social media message - ‘Pl circulate to as many contacts as possible’! And within...