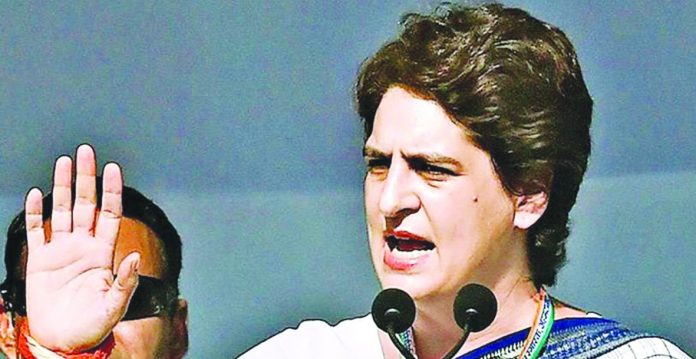 Many feel that such Centre’s  move to evict Priyanka Gandhi could be a blessing in disguise for the Congress Party, if it has to have any realistic hope of making a comeback in the country, must reverse its fortunes in UP. There is intense speculation that Priyanka, who is the party’s in-charge of UP, may shift her base to Lucknow.

National politics has heated up following Modi government’s peremptory order asking Congress general secretary, Priyanka Gandhi to vacate the bungalow allotted to her in Lutyens Bungalow Zone. The move comes within months of SPG protection to the Gandhi family being withdrawn.

A notice sent by the Ministry of Housing and Urban Affairs asked Priyanka to vacate her government bungalow in Delhi by August 1. The daughter of former Prime Minister, Rajeev Gandhi had been allotted the Type 6B bungalow in 1997 as she was an SPG protectee.

“Consequent upon withdrawal of SPG protection and grant of Zplus security cover by Ministry of Home of Affairs, which does not have provision for allotment/retention of Government accommodation on security grounds to you, the allotment of Type 6B house no. 35 Lodhi Estate, New Delhi is hereby cancelled w.e.f 01/-07/2020. One month concessional period on the same rent i.e. up to 01.08.2020 is allowed as per rules,” the notice said.

Congress has seen a design behind the move and pointed accusing fingers at Prime Minister Narendra Modi who, it says, has been unnerved by Priyanka’s political activities in Uttar Pradesh. While a senior Congress spokesperson alleged that the government was blinded by revenge Punjab Chief Minister Amarinder Singh asked the government to withdraw the order in the interest of Priyanka’s safety.

In November last year, the government withdrew the SPG cover that was given to Congress leaders Sonia Gandhi, Rahul Gandhi and Priyanka since the assassination of former Prime Minister Rajiv Gandhi in 1991. The Home Ministry had said the decision was taken after “threat assessment”. In December, Parliament passed the SPG (Amendment) Bill that limits SPG protection only to the Prime Minister and his family and to a former PM and his family for five years.

In the wake of the notice there is intense speculation that Priyanka, who is the party’s in-charge of UP, may shift base to Lucknow. She has been trying hard to resurrect the party in the key Indian state. Many feel that such Centre’s  move could be a blessing in disguise for the party as Congress, if it has to have any realistic hope of making a comeback in the country, must reverse its fortunes in UP.

Congress leader in Lok Sabha Adhir Ranjan Chowdhury taunted the government for failing to evict the Chinese from the territory they have occupied in Ladakh and instead trying to evict Priyanka from her bungalow.  “Before evicting the Chinese intruders who have not only occupied strategic heights in Ladakh but also, killed our soldiers dastardly, evicting Priyanka Gandhi from her bungalow is more important. Instead of waging battle against Congress and Gandhi parivar, wage the battle against Corona and China,” he tweeted.

The BJP, on the other hand, maintains that there is vengeful about the move which is in keeping with the law which is the same for everyone. “In such matters you cannot discriminate. What has been done has been done in the larger interest of the country,” said a BJP leader slamming the Congress leadership for trying to make a mountain out of a mole hill.