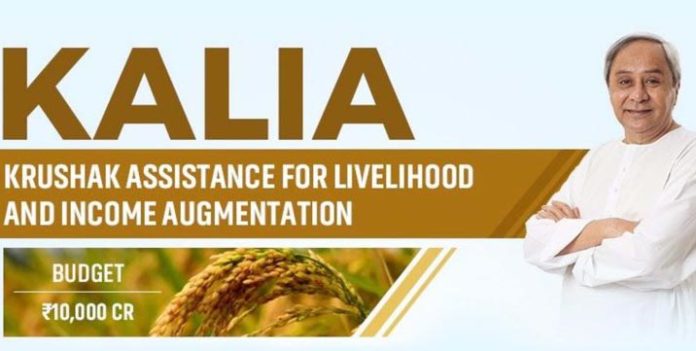 Krushak Assistance for Livelihood and Income Augmentation (KALIA), the flagship programme of BJD led Odisha government, was in focus during the last general elections and ruling BJD’s fortunes revolved around this scheme in many constituencies. The party projected the scheme in a big way to woo the farmers who constitute a sizeable vote-bank.

Odisha government is a worried lot with fake beneficiaries pocketing more than Rs.170 crore disbursed under the KALIA (Krushak Assistance for Livelihood and Income Augmentation) scheme, an initiative being widely hailed as the panacea for the problems afflicting the state’s farming community.

This revelation has thickened the controversy surrounding this financial assistance programme that covers even share-croppers and landless farmers, something that had never happened in the past. By government’s own admission around 3.41 lakh ineligible persons have benefitted from the scheme under which money is credited directly into the bank accounts of beneficiaries.

What is more shocking is that 20,000 of these fake beneficiaries are government employees and pensioners while 12,000 are large farmers and 9,000 are minors. Around 3 lakh multiple members of the same eligible families have received KALIA assistance. The government is now chalking out plans to recover this money.

It is significant to note that KALIA was in focus during the recent elections and ruling BJD’s fortunes revolved around this scheme in many constituencies. The party projected the scheme in a big way to woo the farmers who constitute a sizeable vote-bank.

The government had to contend with minor hiccups like election code of conduct coming in the way of disbursement of KALIA money to the beneficiaries. There was some grumbling among those who did not receive money but the overall response of farmers to the scheme was good because money was being directed credited to the accounts.

Even BJD leaders will admit that the party reaped rich electoral dividends from the scheme which was at one point of time pitted against the PM kisan yojana like the state’s Biju Swasthya Kalyan Yojana competing with Ayushman Bharat. The state government took some time to share the list of beneficiaries with the Centre for the PM Kisan yojana. State BJP leaders have been alleging that the entire list is yet to reach the Centre.

Then came the appeal for for the merger of state-run schemes like KALIA with the PM kisan yojana triggering speculation about state’s financial condition and its ability to sustain KALIA. The speculation was justified considering state’s loan burden and the fact that it needs money to run its many welfare schemes which have helped it win elections.

While the state government needs to find a way out of the financial crisis it also has to explain as to why KALIA money was disbursed to beneficiaries in a hurry without first identifying the genuine ones. The mess that it is facing now seems to be of its own making. Having acted in haste it seems to be repenting at leisure.

This has also given the opposition a handle to criticize the government. Allegations are flying thick and fast that KALIA was used as a tool to garner votes during the elections and that there was no attempt whatsoever to identify eligible beneficiaries. The money went to almost everyone like government dole which is dangerous.