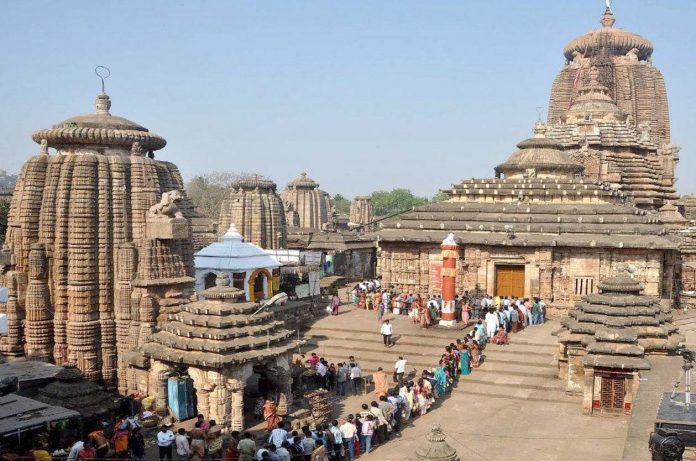 A product of the accumulated and crystallized experience of several centuries, the temple is the quintessence of Orissan architecture. Dominating the landscape for kilometers around the temple of Great Lingaraj is a finished product of consummate skill and rare artistic genius. In the elegance of its proportions and the richness of its surface-treatment), it is one of the mot finished and refined manifestations of the temple-architecture in India. The treatment of its different elements displays the consummate skill of its master-designer; all its constituent parts are effectively integrated into a compact unity of supreme dignity. The crowning achievement of the architect is the design of the graceful contour of its towering gandi: its soaring height and grandeur are almost a marvel. The plastic embellishment of the temple is of equally exquisite workmanship: all the panoply of Orissan decorative motifs is mustered here with a rare aesthetic sense; every piece of carvings serves its appointed role and enhances the majesty of the edifice as a whole. With all the features fully evolved, it is the culmination, in every respect, of the architectural movement at Bhubaneswar and sets the norm for the later temples.

Traditionally, the construction of the temple is associated with three of the later Somavamsi kings with names ending in Kesari but there is no reliable recot’4of its date. However, and inscription on the wall of the jagamohana, recording the grant df a village for the maintenance of a perpetual lamp in the shrine of Krittivasas (by which name the temple was anciently known), and dated A.D. 1114-15 in the reign of the Ganga king Anantavarman Chodaganga, sets the later limit of the date of the temple.

The temple dedicated to Lord Lingaraj at Bhubaneswar dominates the landscape for miles together. Built in about the middle of the 11 century A.D. it is rightly denoted as the best representation of Kalinga type of architecture. It consists of a high curvilinear tower, a pillared hall, a dancing hall and a hall of offerings. It has several smaller shrines clustering around lit within a stone enclosure measuring 520 ft. by 445 ft. The soaring steeple is serenely beautiful and some of the finest speimeans of decorative art are embodied in its superb sculptures. Its elegant proportion and rich surface treatment make it one of the most refined manifestations of Indian temple architecture.

The great tower at Bhubaneswar derived its name ftom the linga worshipped in its Santum­sanctorum under the name of Lingaraja i.e. the king among the lingas. This Sivalinga was also known as Kirttivasesvara and Tribhubaneswar. He assumed the name of Kirttivasesvara after Parvati killed the demon brothers Kirtti and Vasa at his behest. Similarly it derived its name Bhubaneswar ftom TribhubaneSWar (Lord of the three worlds). The linga is not like the common perpendicular column but a huge piece of granite having a ridge at the center. Its diameter is 8 feet. The line at the top separates the black colour of Vishnu and the white colour of Siva. The dust colour represents the presence of holy rivers Ganga and Yamuna. A popular legend as regards to the formation and present shape of the linga is narrated by the temple priests. It runs like this.

Originally there used to be a sphatika linga with inherent power to turn all metal objects into gold or costly jewels. This caused immense scramble for possession among the priests. When the matter was brought to the notice of the king he arranged a stone covering over this linga. This not only ­ preserved the efficacy of the linga for a pretty long time but also prevented the greedy pujakas (priests) from putting everything metal over it to turn into gold. What we find at present is nothing but the stone covering over it. When Kalapahada invaded Orissa and destroyed Hindu monuments in the entire coastal tract, the priests with a view to save the deity from the hands of this religious bigot covered the linga with a large quantity of straw so that Kafapahada would thing that there is nothing except a huge quantity of paddy stored therein. The trick produced desired results. Kalapahada entered the temple, saw the heavy stock of straw and turned his attention ftom the garbhagriha to the minor deities and ­ parsvadevatas placed around the main shring. The infuriated mind of the religious bigot thus caused immense damage to the priceless images of Ganesh, Kartikeya and Parvati. The minor shrines within the premises and the large number of alasakanyas on the outer faces of the main shrine were not spared. But the main deity could survive his destructive hands which worked with a feat of vengeance. Thus Kalapahada left the place leaving the Sivalinga covered under huge quantities of straw.

The process of strong the straw and their removal after the departure of Kalapahada took a long time which generated heat and caused several cracks on the stone surface of the linga. Several portions.. chipped off and th& -surface became uneven. In subsequent periods the temple priests tried to convince the devotees in giving various interpretations to these cracks on the uneven surface. The eastern part of the linga is explained as Hari and the western. part as Ham. The cavity in between symbolisses the presence of river Ganga in the matted locks of siva. The other two minor cracks represent the sacred rivers of Yamuna and Saraswati.

The temple is a combination of four structures all in the same axial alignment, viz., deul, jagamohana, nata-mandira and bhoga-mandapa, the’ last two being subsequent additions. The spacious court-yard is full of shrines big and small, of varying dates, their number exceeding a hundred, of which only a few are of outstanding merit The complex is enclosed by a massive compound-wall pierced by an imposing portal on the east and two secondary gates on the north and south.

The deul is pancha-ratba on plan, and its bada has five divisions. The comer and intennediary ratbas of the ; lower jangha are relieved with khakhara-mundis having the seated figures of eight dikpalas in the niches of the corner ones and various subjects like a worshipping crowd in ftont of a preceptor, a musical party, a group of persons in ftont of a woman and the worship of the linga in those of the intennediary ones. The recesses between the raths are filled in with varieties of vidalsas, some of them having elephant-trunks. The bandhana is made of three finely-carved mouldings and the varanda of ten. The fonner is relieved with a niche containing a couple immediately above the comer khakhard­mundis. The themes of the niches of the pidha-mundis of the upper jangha are mostly deities including Surya, Ganesa, Karttikeya, Parvati, Ardhanarisvara, Siva and Brahma. In the recesses are kanyas of enchanting grace and beauty in various actions: one of them is removing a thorn ftom her foot, a second holds the branch of a tree, a third caresses her pet bird, a fourth is removing her anklet, a fifth is gazing at her own reflection in a m.itror, a sixth holds the ends of her garment,  and a seventh is applying vermilion on her forehead. The carvings on the mundis and the mouldings, rich and minute as they are, do not overshadow the essential character of the figures themselves- a remark that as well applies to the sculptural decoration as a whole in relation to the entire temple itself. The sculpture not only does not interfere with the main curves of the lines of the temple but actually serves to emphasize the effect of the latter; it acts as a perfect accompaniment to architecture.

As already stated, the grandeur of the temple chiefly lies in its toweling gandi. The effect of its grat height is accentuated by the deeply-incised curved vertical lines which soar upwards to its top. The number ofbhwnis in kanika-pagas has now been increased to ten, and the bhumi-amlas have assumed a new fonn, rounded at the comer and rectangular at the sides. The kanika-paga itself is disposed in two planes, the portion near the comer projected and rounded, and the anuratba has a succession of four diminishing 1Teplid\cas of the rekha deul. The decoration of the raha above the projecting lion, rampant on an elephant, is a series of chaitya-windows in low relief. The ponderous amalaka is supported by dopichha lions at comers and four-anned seated figures, one each above the raha.

In front of the chlorite images of the parsua-devatas, Ganesa, Karttikeya and Parvati  in the south, west and north niches respectively, are double destroyed pyramidal porches- all later

additions. The images are notable for their large dimensions and fine workmanship, particularly in the decoration of drapery and details of ornamentation.

The jagamohana (ht28.96m) is equally monumental and closely follows the deul in decorative details. The pidhas are arranged in two tiers, each crowned by a lion above a bho motif. The vertical

sides of all the nine pidhas of the lower tier are relieved with ftiezes consisting of processions of infantry, cavalry, elephants, etc.

The jagamohana originally had two balustraded windows, of which the one on the south side was converted into a door at a later date, perhaps when the nata-mandira or bhoga-mandapa was built. The topmost part of the bada above them is relieved with three rekha replicas spaced by either a male or a female figure.

The Somavamsi period was a brilliant one as far as temple building activities were concerned. Dwing the same period at Konark also two temples seem to have been erected. The so called Chhayadevi temple from the meager evidence that remains can be assigned to the Somavamsi age. The Trivensisvar Siva temple, about 2 kms from Konark, also seems to have been built in the same epoch.