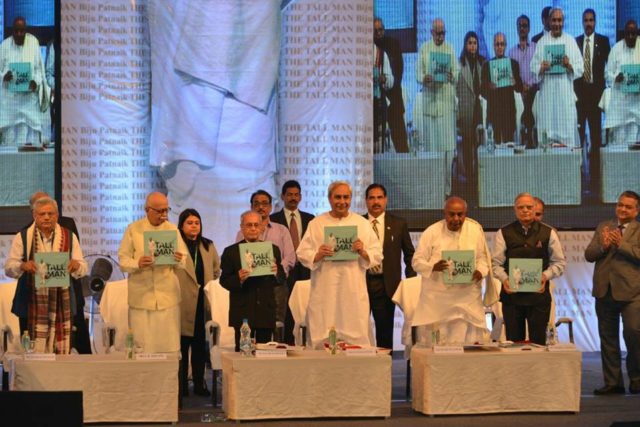 Biju Babu was a visionary, who had a major role to play in the setting up of public sector giants like the National Aluminium Company Limited (NALCO). He was a man who dreamt big and took his courage in both hands to turn his dreams into reality. Former President Pranab Mukherjee described his speech as ‘tribute of a short man to a tall man’.

It was an event to remember. It brought together a galaxy of national and state leaders. Eminent leaders like president, Pranab Mukherjee and former Prime Minister, H.D. Deve Gowda and former deputy Prime Minister, LK Advani recalled their association with late Biju Patnaik, father of chief minister, Naveen Patnaik.

Releasing the book “The Tall Man Biju Patnaik” at the jampacked Utkal Mandap, Bhubaneswar, Mukherjee shared the dais with Deve Gowda, Advani and CPI(M) general secretary, Sitaram Yechury. The president recalled the legendary leader’s speech in parliament when he (Mukherjee) was a minister in the India Gandhi cabinet.  “He told me jokingly that we will never be able to earn more,” said the former President.

However, Biju Patnaik cooperated with him fully years later when Mukherjee became the deputy chairperson of the Planning Commission. With the Odisha leader’s active support he was able to work out a formula for better distribution of resources among states.

Describing his speech as the “tribute of a short man to a tall man” the former President said Biju Babu was a visionary, who had a major role to play in the setting up of public sector giants like the National Aluminium Company Limited (NALCO). “He was a man who dreamt big and took his courage in both hands to turn his dreams into reality,” said the former President adding that he was lucky to have received a lot of affection from the leader.

Former Prime Minister, Deve Gowda was candid enough to admit that Biju Babu played a big role in making him the chief minister of Karnataka and later the Prime Minister of the country. “He was truly a tall man both in physical stature and his stature in politics,” said the former premier. Both Deve Gowda and former  deputy Prime Minister, LK Advani thanked Sundar Ganesan, the author of the book for bringing to light many interesting facets of the late leader’s life.

Yechury recalled the role of Biju Babu during the United Front days and the encouragement he received from him as a young leader at the UF steering committee meetings. “Whenever there was a problem he will come up to me and assure me that everything was going to be alright and that secularism in India will be safe,” reminisced the CPI (M) stalwart underscoring the need for carrying the Biju legacy forward.

The complexion of the audience was symbolic of the legend’s political appeal that cut across party lines. While Two former chief ministers, Giridhari Gamang and Hemanand Biswal were there CPI(M) veteran, Shivaji Patnaik, who knew Biju Babu closely also sat in the front rows at the packed auditorium. Congress MLAs, Prakash Behera and Anshuman Mohanty were among the audience along with BJP veterans, Bijay Mohapatra and Biswabhushan Harichandan, both of them having worked under Biju Babu as ministers. A long time associate of the leader and freedom fighter, Bhabani Charan Patnaik was also there.

Among the young guns of the ruling BJD, former minister, Atanu Sabyasachi Nayak whose father, Rajkishore Nayak was a close associate of the late leader , was the most visible at the venue alongwith party general secretary, Sanjay Das Burma.

Chief Minister, Naveen Patnaik, who spoke both in Odia and English, lent the occasion a touch of emotion when he thanked the guests on the dais for making him “feel my father’s presence”. Describing his father as a “great institution” he said “Biju Babu was the idea of Odia self esteem and reflected the aspirations of the Odias.” Naveen signed off.