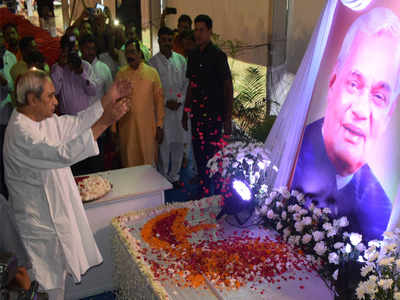 There have been some significant political developments in the last few weeks. These will have a bearing on the fortunes of the political parties in the next elections. The ruling BJD seems well set to return to power in 2019 though the BJP is trying hard to stage a grand comeback in the state. The next polls are going to see an interesting battle.

This was a significant development which few political observers would have missed. Chief Minister, Naveen Patnaik’s participation in the all-party memorial meeting organised by the BJP recently at Bhubaneswar to pay homage to former Prime Minister; Atal Bihari Vajpayee received fulsome coverage in the local media.

The reason Patnaik’s participation received so much attention was the widespread speculation before the event that he may skip it given his party’s adversarial relations with the BJP in the state. But the astute politician that he is Patnaik turned up at the venue and offered his tribute to the late leader under whom he had worked as a minister at the Centre.

In the process he took some of the sting out of BJP’s campaign against him and his government and also earned the gratitude of his rival. That BJP leaders were grateful to him was evident from the way he was received at the venue by the two union ministers from the state Dharmendra Pradhan and Jual Oram and the statements of some of the saffron leaders.

One of them thanked him despite saying that he had expected him to turn up given the stature of the former Prime Minister whose appeal cut across the political spectrum. Sources, however, said that Patnaik’s participation in the event was confirmed only 24 hours before the meeting.

What helped the chief minister make up his mind was the solemnity of the occasion and his personal connection with the former Prime Minister under whom he served as minister for steel and mines from March 1998 to March 2000 till he assumed office as the Odisha chief minister. The fact that Vajpayee was acceptable to all parties because of the flexible nature of his politics also helped.

Sources in the ruling Biju Janata Dal (BJD) described the chief minister’s decision as the right tactical move. “He has proved himself to be a gracious leader. This was a different kind of occasion and his presence at the meeting only enhanced his image,” said a party leader while another explained that Naveen always rose above politics in such matters. “Here there was an added factor as well. The chief  minister  considers Vajpayee to be an inspiration and a mentor,” the leader added.

Naveen himself struck the right chord while addressing the all-party gathering at the Exhibition Ground where the memorial meeting was held. While he described Vajpyee’s demise as a national loss as well as a personal loss for him he said he would always cherish his relations with the departed leader whom he described as a unique combination of idealism and tolerance.

The chief minister, who recalled having taken his first baby steps in politics under Vajpayee, used epithets like “statesman” and a “man of strong principles” while paying homage to the former Prime Minister who, in his opinion, taught to the rest of the world the art of managing a coalition. Describing Vajpayee’s death as the end of era Naveen recalled the former Prime Minister’s love for Odisha. “He was a man with a large heart with a special corner for the state,” said the chief minister.

Significantly enough his much talked about participation in the memorial meeting for Vajpyee came in the wake of BJD’s support for NDA candidate, Harivansh Narayan Singh for the post of Rajya Sabha deputy chairperson. His party’s vote played a crucial role in ensuring Singh’s victory for which both Prime Minister, Narendra Modi and BJP president, Amit Shah conveyed their gratitude to Naveen.

What is more important is that Naveen did this without in any way diluting his policy of maintaining equidistance from BJP and the Congress. As the senior leaders of his party claimed later the BJP had voted in favour of Harivansh as he happened to be an MP from JD(U), a party with secular credentials and an ideology similar to the BJD.

“We share a common ideology and a common political heritage. Both our parties are inspired by the Jay Prakash Narayan movement and have been part of Janata Parivar,” explained a BJD leader.

While that may be true the election of Rajya Sabha deputy chairperson underscored the importance of Naveen as a powerful regional strap who is sought after by both NDA and the UPA but who continues to maintain his own independent identity.

Like an astute politician Patnaik kept his cards close to his chest till the last moment. He condescended to favour the NDA candidate only after receiving calls from the Prime Minister, the BJP chief and most importantly Bihar chief minister and JD(U) chief, Nitish Kumar.

While the magic figure for any combine to get its candidate elected in the Rajya Sabha was 123 the BJP, which is the largest party in the House with 73 members, was falling short by six even if it counted on support from regional outfits like AIADMK ( 13), TRS ( 6) and YSR Congress ( 2) apart from JD (U) ( 6), Shiv Sena ( 3), Akali Dal (3) and some smaller parties that have backed it in the past. Similarly, the Congress, with 50 seats of its own in the House, could at best hope to reach 112 with the support of allies. Thus, the support of Naveen-led BJD, which has 9 MPs in the Rajya Sabha, was crucial for both the sides.

Aware of his strength, Naveen played his cards extremely well, reinforcing his position as a powerful regional leader who could influence the course of national politics. While Naveen over the years has learnt the fine art of positioning himself advantageously in the national political scenario on the home front he has been making all the right moves with the launch of one people-centric programme after another, the latest being ‘Ama Mukhya Mantri, Ama Katha’ that seeks to expedite the process of social transformation in the state through dialogues. It is this combination of political acumen and pro-people governance that has made Naveen invincible. And he seems set to carry on.