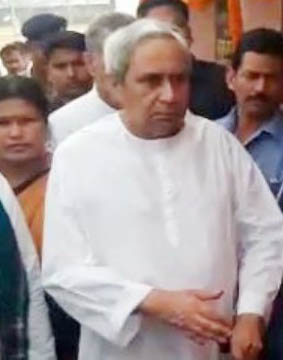 Naveen, who struck an immediate chord with the crowd at Barpali by greeting them with “juhar”, thanked the people of the constituency for choosing the path of development and empowerment. He recalled the love the people and encouragement, which doubled his zeal to work for people.

Keen to sustain the tempo generated by BJD’s spectacular victory in the recently concluded  Bijepur  by-poll  chief minister, Naveen Patnaik, who is already gearing up his party for the general elections, made a trip to Bijepur and dedicated two projects to the people in the constituency while laying the foundation for 18 others. The chief minister also assured people that he would personally monitor the development of the area.

“I had made certain commitments during the by-poll and I assure you we will fulfil our commitments. I will personally monitor the development of Bijepur and the process of that begins today,” said Naveen while addressing the “Bijepur juhar” rally at the Barpali High School ground, around 15 kms from Bargarh. Juhar is the typical form of salutation in the Bijepur belt which is part of politically sensitive Bargarh district.

Naveen, whose party had pulled out all stops to make his thanksgiving trip to the constituency a success, inaugurated Rs. 25 crore Jamutpali mega lift irrigation project along with a 100-seat capacity girls’ hostel in Gaisilet block which was in news a few months ago for alleged farmer suicides that the Opposition had sought to play up. The chief minister also laid the foundation for 18 other projects including six rural pipe water schemes and assured people that the whole of Bijepur would be electrified by coming August 15.

The chief minister, who struck an immediate chord with the crowd at Barpali by greeting them with “juhar”, thanked the people of the constituency for choosing the path of development and empowerment. Recalling the love the people of the area had showered on him during his two-day campaign in Bijepur he said it had made strong his resolve to work harder for the people of the state. “Your love and encouragement doubled my zeal to work for people,” he said while also expressing his gratitude to the BJD workers who gave their best to ensure the victory of party candidate, Rita Sahu.

The chief minister also reiterated his resolve to continue his fight for Odia pride and to protect the interests of the state. “Be it the issue of Mahanadi, special category state status to Odisha or the demand for waiving of GST on the products of state’s weavers, our fight will continue,” asserted Naveen.

The chief minister, on whom a shoe was flung at a public meeting during his campaign in the constituency, also made a mention of poll violence recalling that one of his party workers, Dileswar Sahu was killed in an attack by rivals. “The by-poll saw a lot of violence which pained me,” he said while paying homage of Sahu, who was driving the vehicle in which minister of state for labour, Susant Singh’s brother, Subrat was traveling. Subrat and one of his associates had also sustained injuries in the attack.While the chief minister appears to have played his cards well in Bijepur, opposition party leaders continue to target him. State BJP president, Basant Panda said, “Naveen Babu had made a lot of promises to the people of the area in the past as well but kept none of them. He will do the same again. He deals in lies.”

Former minister and Congress stalwart, Niranjan Patnaik said the chief minister’s thanksgiving trip to Bijepur was expected. “What is to be seen is if any of the promises that he has made are actually translated into reality,” he remarked.Pratisruti Plus-March16-31-2018