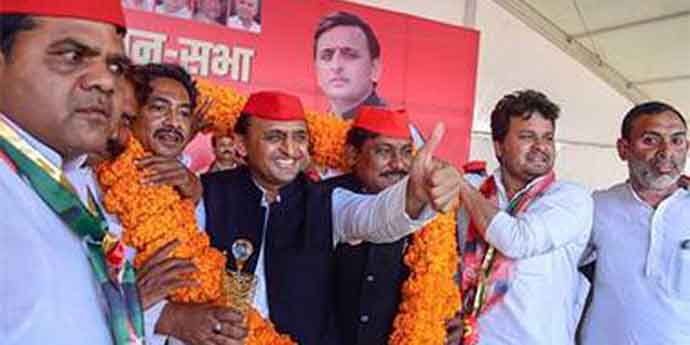 With general elections approaching results of bye-elections ahead of that are being watched keenly as they could give an idea of the popularity of major parties. It is in this context that the two Lok Sabha by-polls in UP, India’s largest and politically most sensitive state, must be seen. BJP’s defeat on both the seats does not augur well for the party ahead of the general elections.

Only a few weeks ago there were wild celebrations in the BJP when the party stormed the Left bastion in Tripura forming a government in the state for the first time. It also did well in two other north-eastern states.

But the euphoria generated by the results of the abovementioned assembly by-polls had evaporated with the party suffering a double whammy in Uttar Pradesh Lok Sabha by-elections losing both Gorakhpur and Phulpur to arch rival Samajwadi Party which had received unexpected support from Mayavati’s BSP.

The defeat has hurt the BJP even more because Gorakhpur was the stronghold of Uttar Pradesh chief minister, Yogi Aditya Nath while Phulpur had been vacated by deputy chief minister, Keshav Prasad Maurya. The saffron party which is ruling UP with a brute majority has been stunned into silence.

While Prime Minister, Narendra Modi is yet to make any significant statement on the by-poll debacle in a state which sent him to the Lok Sabha in the last elections, former UP chief minister and Samajwadi Party chief Akhilesh Yadav has called this a victory of alternatives and social justice.

For the BJP it is certainly time to self introspect for a party that barely a year ago formed government in the state with a two-thirds majority, and is also ruling the Centre, losing two key seats it held before the polls is rather unusual. Especially painful is the loss from Gorakhpur which was Adityanath’s parliamentary seat.

For the SP and the BSP this has ended a very long spell of electoral drought for them. But if analysed impartially one would see that the verdict only means that the voters have not chosen the SP-BSP but they have rejected Modi and Yogi. It appears as to teach a lesson to the BJP the voters had been waiting for an alternative that could match the saffron party in the poll arena. With BSP deciding to back the SP the people got that alternative.

The BJP, of course, will argue that the poll results are not a verdict on Yogi or Modi’s performance. However, the defeat is very much a result of both party’s poor performance and its internal differences. Modi has been promising voters the moon but the list of his actual achievements falls far short.  People feel that the woes of farmers and the youth have increased and everybody has been hit hard by demonetisation and GST. The government has failed to create promised jobs.

Talking of its performance in UP the only thing that the government has to show is encounters which have sent shivers down the spines of criminals. But the state is yet to get regular electricity supply while children are dying in hospitals. Even the condition of roads is not good.

While Modi, it seems, has been running his government on promises, Yogi’s is using fear to stay in power but neither can succeed for long as a strategy. The results have also exposed the infighting within the party. Talking to the press after the defeat, Maurya went so far as to say that the BJP had won Phulpur only once, but Gorakhpur was lost despite having been with the party for decades, his statement betraying the grudge he has been nursing since the Assembly elections.

The fact is that 2017 elections in UP were fought under his stewardship and he was one of the front runners for the post of the chief minister. But in the end, Adityanath walked away with the main prize. Sources say that eversince  Maurya and Yogi have been running the state government in their own ways and don’t see eye to eye on many key issues.

There has been talk for long that Yogi wanted BJP to lose from Maurya’s seat as this would have made the chief minister’s position stronger. Similarly in Gorakhpur caste equations forced the BJP to its candidate but that did not satisfy a large number of Yogi’s followers who did not work wholeheartedly for the party. This both in Phulpur and Gorakhpur the party practically shoot itself in the foot.

The defeat in Gorakhpur raises many questions. The seat having been represented by Adityanath for such a long time how did he fail to see the BJP’s popularity dipping? But why blame him alone as many other leaders and even Prime Minister, Narendra Modi and his right hand man, Amit Shah must take part of the responsibility for the UP debacle.

The defeat should also bother the party as it is also a reflection of the discontent among party workers. Grassroot workers have been complaining of neglect for long. Yogi’s style of governance has not gone down well with them. But the chief minister somehow couldn’t care less.

For Modi there can be two ways of looking at the verdict. From one point of  view he can be happy with the outcome as it has brought down to the ground Adityanath who had been flying too high after being crowned UP chief minister and had indirectly begun projecting him as Modi’s rival. The lion bearded in his own den is unlikely to nurture the same dreams again.On the other hand, the double blow in UP has taken the sheen off BJP’s spectacular victory in Tripua. Besides it is a loss that has hurt the party more than some of the recent reversals in Rajasthan and Madhya Pradesh.

Bihar by-poll results have also rubbed salt into BJP’s wounds. In a major set-back to the BJP-JD(U) combine Lalu Prasad Yadav’s RJD won the Araria Lok Sabha seat and the Jehanabad assembly seat. The only saving grace for the BJP was its win from Bhabhua assembly constituency.

The signs appear to be ominous for the BJP and the government ruling at the Centre must realize that unless its delivers on the promises made to the people it is going to be rejected by them.Pratisruti Plus March 16-31(2018)