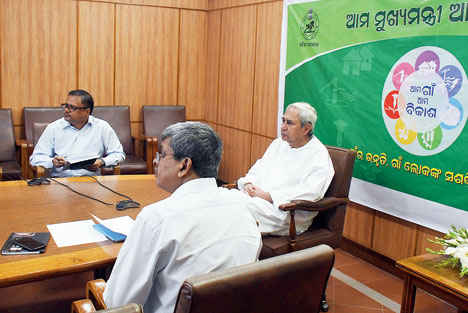 The chief minister promised to reach all the performing panchayats through video conference every week, interact with the elected panchayat representatives and accord sanction to their project proposals immediately. The project cost will be minimum Rs 1 lakh and maximum up to Rs 10 lakh.

With an eye to the next general elections Chief Minister Naveen Patnaik recently launched “Ama Gaon, Ama Bikash (our village, our development) Yojana on the occasion of the birth anniversary of his father and former chief minister Biju Patnaik which is celebrated as Panchayati Raj Divas. This programme will be funded by the state government from its own resources.Naveen interacted with the sarpanchs of four selected good performing gram panchayats over video conference from state secretariat, heard their grievances and instantly sanctioned 32 projects worth Rs 2 crore, as proposed by the local panchayati raj representatives. The projects were related to construction of community halls, renovation of water bodies and like.

“We have initiated a new programme. I spoke directly to villagers and heard their about their problems. I sanctioned the projects worth Rs 2 crore immediately”,  Naveen said.

Any developmental project, which does not fit into any existing schemes of the government scheme, can be funded under this new unique programme. The chief minister will reach all the performing panchayats through video conference every week, interact with the elected panchayat representatives and accord sanction to their project proposals immediately. The project cost will be minimum Rs 1 lakh and maximum up to Rs 10 lakh.

Naveen spoke to sarpanches of Sasan gram panchayat in Sambalpur, Sanakuda gram panchayat in Ganjam district, Narayanpatna panchayat of Maoist-affected Koraput district and Khairabad panchayat of Jajpur district. “Your chief minister is in your area. He will meet the people every week to enquire about their problems. You give good proposals for the development of your villages and these will be sanctioned immediately”, he told the sarpanches.

The direct interaction programme with the villagers will be held at the sate secretariat twice every week. The programme is believed to have been launched keeping the coming general elections in view. Earlier, the programme was started at the party level a few months ago.

However, the Opposition Congress and BJP criticized the move saying that it was just an eye -wash to hoodwink the people ahead of general elections. Leader of Opposition Narasingha Mishra said, “There are scores of villages which do not have safe drinking water. Naveen Patnaik government is announcing schemes after schemes keeping the elections in mind”

A senior BJP leader said, “The state government has not handed over many constitutional powers to the panchayati raj bodies. It has failed to provide drinking water and employment to the villagers under the Mahatma Gandhi National Rural Employment Guarantee Scheme.”

However, a BJD spokesperson refuted the opposition allegations. “The new move has been taken for public interest and in public view. There is no hanky panky”PP-March16-31-2018