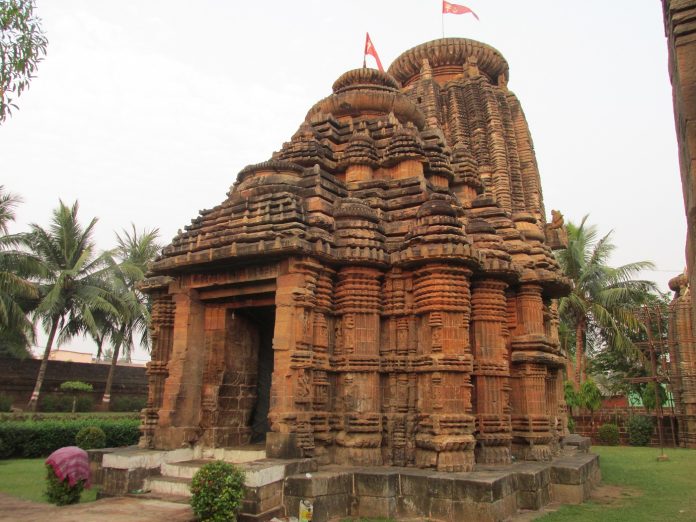 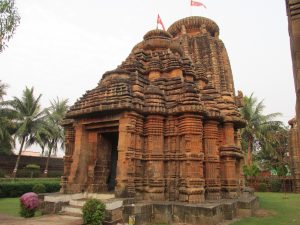 The Chitrakarini temple is situated on       the west of the Lingaraj temple at  Bhubaneswar. Like the Brahmesvara temple, the Chitrakarini temple, with four subsidiary shrines at the corners, is of the panchayatana (five-shrined) type, the whole group enclosed by a compound-wall, the main temple with jagamohan faces east. In surface-treatment, however, the deul approximates more to the Sari group of temples (below). Built on a low undecorated platform with projections, it is pancha-pidhas on plan, with a division of the corner ratha all through

The decoration of the roof of the jagamohana is a departure from the established type; the pidhas are arranged in two tiers as usual, but on each tier there is a row of replicas of the pyramidal roof, one on each projection. Two of the mezes, both of them depicted on the lintels of the non­functional balustraded windows of the jagamohana, deserve special attention; the one on the south side depicts a marriage, probably of Siva and Parvati, while that on the north shows Krishna playing on his flute amidst his enchanted followers and cattle listening with rapt attention. Of the three overhanging mouldings above the south lintel. the topmost is notable for a procession including riders on camels (camel being extremely rare in Orissan sculpture). 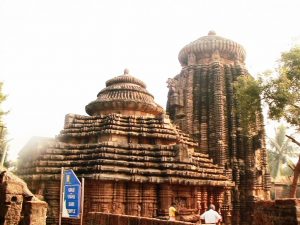 Like the Ananta-Vasudeva and Yamesvara temples, the Sari Deul is noted for its minute carvings. Its narrow courtyard is enclosed by a low compound-wall. The Sari Deula at Bhubaneswar, facing west, consists of only a vimana and a jagamohana. The temple reproduces the fundamental features of Orissan temple architecture in its mature phase in having a panchanga bada and a saptaratha plan. The facets of the jangha are relieved with meandering creepers, flowers and scroll-work, often containing animal-figures, the central facets being further distinguished by khakhara-and pidha-mundis. The corner khakhara-mundis on the lower jangha-mundis having their female counterparts. Of the parsva-devatas only the chlorite image of Parvati is extant.

The . Jagamohana closely follows the deul in decorative details. The balustraded windows, without any opening, are only ornamental, and considerable skill is displayed in their embellishment. The balusters on the south side are relieved with dancers, while those on the north with musicians. The niche above the south window contains a royal procession with the king seated on an elephant and surrounded by infantry, cavalry and elephants.

The jagamohana is a pidha deula and has two balustraded windows. All available space of the temple bears minute decorations in the same style as at Konark. Some motifs, like a nude female figure standing over a stump like object, and a lady wringing her long hair after a bath while a swan looks on at her feet, which ftequently occur at Konark, are also seen here. Such sculptural affinities suggest that its date cannot be far removed irom that of the Konark temple. There is even a possibility that these two temples, belonging to the same period, were built by the same king. Among the sculptures of the Sari deuia, we find the depiction of royal personage as is evident ftom the attendants and the parasols held over his head, standing with his left leg raised and bent as though skipping with a rope. A similar figure, in a similar style, is found on the northern parsvadevata shrine of the Konark temple and on the western bada of the main Simhachalam temple which was built on Narasimha-I’s orders. As the same royal figure appears in these three temples, it may be that he is Narasimha-I on whose order the Sari Temple was erected. Otherwise such a similarity would be difficult to explain. 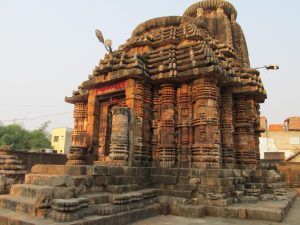 Temple Yamesvara is situated on the bank of Bindu sarovar near the road leading to aerodrome.The temple, with its deul and jagamohana, recalls the Ananta- Vasudeva temple both in structural features and richness and affluence of decoration. Also like the latter, it is built of soft sandstone, resulting in a large amount of exfoliation and obliteration of the carvings. Almost all the sculptures of the deul are now gone. The damaged platform, which had the same type of ornamentation as that of the Ananta- Vasudeva temple, is now shorn of its facing stones. Both the deul and the jagamohana have lost their crowning members above the amla.

The deul further resembles the Ananta- Vasudeva temple in the disposition of the pagas as well (e.g. division of comer ratha limited to bada only). Here, however, the dikpalas and their female counterparts occur on the comer rathas of both the deul and jagamohana. Of the images of parsva­devatas, only the mutilated chlorite figure of Ganesa exists. The porches in front of them are now reduced to the level of the platform.

The non-functional balustrade windows of the jagamohana are richly carved. The lintel of the north window depicts a royal personage seated on a throne amidst his followers and approached by visitors, who have apparently got down ftom elephants, carved at the comer. The pilasters below this window, corresponding to the pabhaga-mouldings, are relieved with naga and nagi musicians. The niche above this window shows a preceptor throunged by his followers, below which is a meze of fighting cavalry. The carvings of the south window are damaged. The animated meze of trotting elephants is, however, worth noticing. The scroll-work containing figures of animals on the facets of the central projections is equally noteworthy.

In iront of the door-jambs of the jagamohana were two delicately-carved pillars, not partly preserved. Between the steps leading to the jagamohana and the pillared mandapa (reduced to core only) is a stunted vrisba~stambha (column sunnounted by a bull). In this respect the temple Yamesvara follows the Konark temple in its structural design and scheme of decoration. Like the Konark temple the Nata mandira of Yamesvara temple was constructed as a detached structure and the intervening space between the Jagamohan and Nata mandira was occupied by the vrishastambha.

The temple is conspicuous for its spacious courtyard surrounded by an imposing compound­wall recessed with a series of niches for lingas. In the south-east comer of the enclosure is visible the upper part of a small tri-ratha shrine of the Parasuramesvara type, buried under the earth. The five divisioned bada of this temple is embellished with a wealth of decorative carvings, scroll work, pidha~ mundis, khakhara-mundis, gajavidalsa, female figures, erotic sculptures, nagas, naginis, etc., according to the well-established convention. Some of the motifs like a lady standing over a stump like obect or a lady sitting with her pet animal, recall the treatment at Konark.