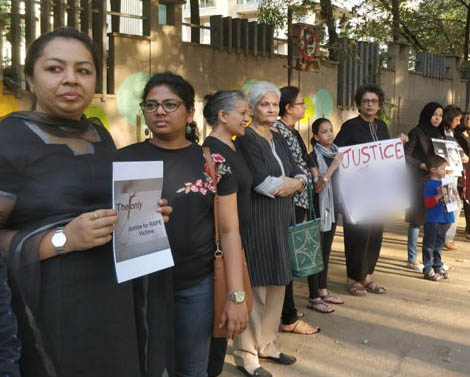 The tragic incidents of Unnao and Kathua displaced abuse of power by influential people, though the case in Kathua of Jammu and Kashmir has a more sinister template. It is for the first time that interest groups including a local Hindutva outfit and even many lawyers backed the rape accused persons instead of sympathising with the girl and her poor shepherd family!

Two rape cases kept India shocked and hooked for the past several days. The first was the alleged rape of a 17-year-old girl by BJP MLA Kuldip Singh Sengar in Unnao in Uttar Pradesh, and the second the rape and murder of an 8-year-old girl in Kathua district in Jammu and Kashmir.

In the first case, the alleged crime occurred a year ago but the police did not even register an FIR on the complaint from the victim. They went from pillar to post meeting top police officials but their cries for help fell on deaf ears. On the other hand, they were repeatedly harassed by the MLA’s followers. But she and her family kept fighting for justice.

Recently, the girl even put up her grievance before Uttar Pradesh chief minister Yogi Adityanath, but he failed her miserably. Adityanath’s government however woke up after the girl’s father was found dead, allegedly due to beatings by the MLA’s brother and his henchmen. Video footages showed he was being mercilessly thrashed by them in the presence of police officials a day before he died. The MLA’s brother was arrested by Uttar Pradesh police for his involvement in the alleged murder of rape victim’s father. The MLA was also arrested by CBI after it took over the case from Uttar Pradesh police,

The second case is more horrifying. The 8-year-old girl, Asifa, was kidnapped on January 10 and kept in a temple through the next week. She was drugged, repeatedly raped and finally killed. Her body was recovered on January 18. The local police botched up the investigation and destroyed evidence. Following court intervention, the Jammu and Kashmir government handed the case over to a special investigation team that found obstacles from influential people at every stage of the investigation. Finally, eight persons, including two special police officers and a head constable, were arrested for their involvement in the crime.

Both the tragic incidents displaced abuse of power by influential people, though the case in Jammu and Kashmir has a more sinister template. It is for the first time that interest groups including a local Hindutva outfit and even many lawyers backed the rape accused persons instead of sympathising with the girl and her poor shepherd family.

The SIT faced protests while filing the charge sheet for the crime in the court. Two BJP ministers in the Jammu and Kashmir government attended meetings in support of the accused. They had to resign following public outcry across the country.

Prime Minister Narendra Modi, who keeps tweeting on his Twitter on one thing or the other every day, did not find the cases worth twitting for several days. He finally talked about justice for daughters a day after Congress president Rahul Gandhi led a mid-night protest march at India Gate.

In the meanwhile, in both the rape cases usual branded BJP troll army used the social media to paint the victims’ families as villains. The fathers of the Unnao girl and Asifa were projected as criminals. Many such trolls, which included BJP politicians and some celebrities loyal to the party, questioned why there were no hue and cry when “Kashmiri Pandit girls in the Valley and Hindu girls in Assam raped by Muslims”. They even shared a three years old story of a rape of a girl by a Muslim cleric in a mosque as if it occurred earlier.

All such mischievous campaigns were obviously aimed at diverting the attention from Asifa’s tragedy, which had touched a chord with the collective consciousness of the nation, like the Nirbhaya case when the UPA government was in power.

In India, a rape occurs every 14 minutes and it goes without saying that each of them is brutal and tragic. However, it is the circumstance and timing of a particular crime that shake us from our slumber.

Asifa’s case did not come to limelight instantly. It would have not come up beyond the inside pages of the local papers had the police arrested the culprits immediately. It came to limelight because the local police tried to suppress the case ostensibly to shield the influential people involved in the crime.

The most dangerous trend emerging from the Kathua case is that in a polarised India anyone may try to go scot free by changing “Bharat Mata Ki Jai” after committing a heinous crime. However, it was heartening to note that in both Unnao and Kathua cases, the majority of Indians stood up for the victims and showed to the fanatics that it is not easy to polarise people on communal lines in India.  pp-april16-30-2018