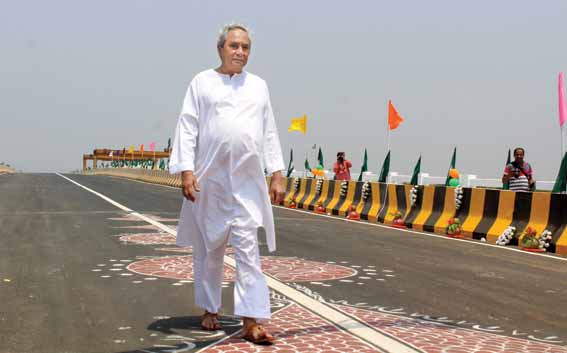 As a leader chief minister, Naveen Patnaik continues to grow in stature. Under him the state has made significant progress in various spheres of life which has resulted in a rise in the standard of living of people. Now his good work is being appreciated even at the international level.

Controversies notwithstanding neither the image of chief minister, Naveen Patnaik has suffered much nor has there been any slackening of the pace of state’s development.

Truth to speak Odisha seems to be on a roll under the leadership of chief minister, Naveen Patnaik winning accolades from world bodies like the World Health Organisation as well as the BJP-led NDA government at the Centre.

Only recently Odisha received a pat on its back from WHO for its commendable work in the field of malaria eradication. The world’s top health care monitoring organisation cited Odisha’s efforts in the field as a case study in its report. Patnaik, too, tweeted happily about WHO’s recognition of his efforts in this field.

This, indeed, is not the first time that the state under Patnaik’s leadership had won laurels at the international level. His government’s work during cyclone Phailin had been appreciated worldwide and is still treated an object lesson in disaster management by many other states of the country.

Government of India has appreciated the Odisha government’s work on the basing of reports of the Parliamentary Standing committee on Home affairs on the “Devastation caused by Natural Disaster, Hudhud cyclone in Andhra Pradesh and Odisha.”

The Centre particularly appreciated how the state moved its attention from mitigation to management in the cyclones of 2013 and 2014 after the huge losses it had suffered in the 1999 super cyclone which had killed more than 10,000 people.

Thousands of animals had been killed in that calamity and the loss in terms of loss of property was more than a billion crore.

However, things have improved in the last one decade after the state turned the focus on disaster preparedness.  It has constituted a special department for this purpose and also created a specialized force to deal with the emergency situations.Thus ahead of the cyclones in 2013 and 2014, the state government was able to evacuate people from villages adjoining the vulnerable areas and accommodated them in specially constructed buildings.  There was almost no casualty in these cyclones.  This stupendous achievement of the state was also appreciated by the UN.Deputy Secretary to the Government of India of Ministry of Home of Affairs,  Pradeep Kumar in his letter to the chief secretary Aditya Prasad Padhi said  “The Committee ( Parliamentary Standing Committee) observes that the various organizations like National Disaster Management Authority, World Bank appreciated the efforts of the Odisha government that while in the 199 super cyclone the state was the victim  in 2013 and 2014, the state successfully shifted its focus/ attention from “mitigation” to “management”. The Committee commends the government of Odisha for its outstanding work, and desires that the other disaster prone states should learn from Odisha experience in the matter of preparedness and disaster management to meet any eventuality.”

With such a track record Patnaik is unlikely to be rattled by rival BJP’s sabre rattling. The rivalry between Patnaik-led Biju Janata Dal (BJD) and BJP was all too visible on the recent Utkal Divas, the state’s foundation day today. The occasion virtually turned into a one-upmanship game between these parties with both organizing parallel programmes led by chief minister, Naveen Patnaik and union minister, Dharmendra Pradhan respectively. Pradhan is widely perceived to be the saffron party’s chief ministerial candidate in the 2019 elections.While Naveen dedicated to the people the 3.13 km Madhusudan bridge over Mahanadi connecting Cuttack and Nuapatna in Choudwar, named after Utkal Gaurav Madhusudan Das, one of the architects of modern Odisha, Pradhan, the minister for petroleum and natural gas, began the day with the launch of ‘Nua Odisha Nirmana Abhijan’ (the campaign for building new Odisha ) at the Chandrabhaga beach, a stone’s throw from the world famous Konark sun temple. The event saw Upendra Maharana, the descendant of the great Bisu Maharana, the chief architect of the sun temple, administering the oath for the development of Odisha to a large group of youths.

Pradhan also inaugurated the sun temple beautification project sponsored by the Indian Oil Foundation. Undertaken at a cost of Rs. 45 crore the project includes a bus terminus with a parking bay for 60 buses, a spacious car and two-wheeler parking and a pathway. The minister, who is trying hard to project his party as the champion of Odia pride, described Konark, a UNESCO heritage site,   as a scientific centre developed by humans some 700 years ago.

The chief minister did not lag behind in showcasing his government’s efforts in taking the state forward and honouring its greats. Inaugurating the Madhusudan Setu he said the bridge, which was a fitting tribute to Utkal Gaurav Madhusudan Das, also represented his government’s keenness to develop quality infrastructure in the state.

Naveen also paid homage to state’s eminent freedom fighters like Utkalmani Gopabandhu Das, Pandit Godabarish Mishra and Gangadhar Meher while speaking at the state level Utkal Divas function at the Utkal Mandap here. The chief minister took the opportunity to recount the achievements of his government in various fields, making particular mention of Bhubaneswar being recognized as a global smart city and Odisha figuring prominently in the Asian Development Bank’s report on ease of doing business.

Invoking lord Jagannath, emperor Kharvela and the mighty king Kapilendra Dev, the chief minister spoke of his government’s efforts to promote Odia language and expressed his determination to continue his fight for Odia pride.

Pradhan did the honours at a similar programme held at the capital’s Baramunda ground where he gave away awards to achievers in various fields including Odisha’s mountain man, Jalandhar Nayak who has cut a road through a hill in Kandhmal, his home district.

However, one does not need to cudgel one’s brains much to realise that chief minister, Naveen Patnaik is still miles ahead of his rivals because of his clean public image and the good work being done by his government.PP-April16-30-2018

Columns Saroj Mishra - August 21, 2021
0
One may find a request at the bottom of the social media message - ‘Pl circulate to as many contacts as possible’! And within...