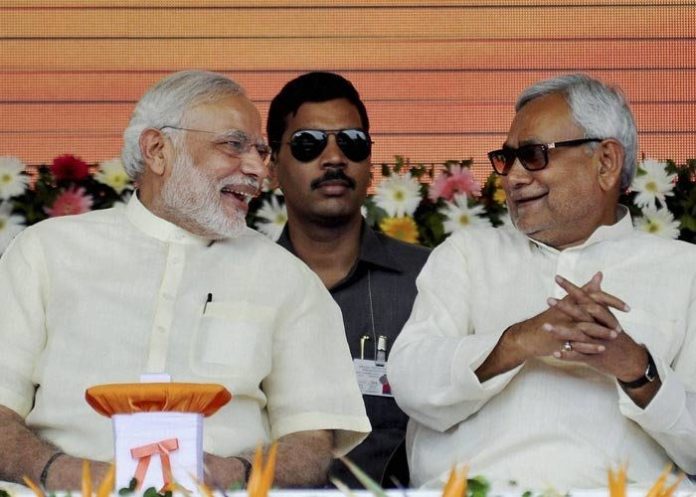 Upendra Kumar Kushwah’s Rashtriya Lok Samata Party bagged six Lok Sabha seats taking the NDA tally to 31 seats out of total 40 seats during 2014 election. Kushwah left the NDA as soon as it was evident that the BJP would be more accommodative towards the JD (U) in sharing of Lok Sabha seats ahead of 2019 elections.

The Bharatiya Janata Party recently lost three states – Madhya Pradesh, Rajasthan and Chhattisgarh – to the Congress. It has dramatically altered the political dynamics in the country ahead of the 2019 general elections.

Prime Minister Narendra Modi, who had come to power at the Centre with a clear mandate in 2014, now looks vulnerable. The National Democratic Alliance allies have started asserting themselves. Some have started questioning Modi, some have moved away.

All these have made the BJP to come down from its high pedestal and compromise with the allies. The process has started from Bihar where it shares power with chief minister Nitish Kumar’s Janata Dal (United).

The wily Kumar then immediately struck an alliance with the RJD to decisively defeat the BJP in the state assembly elections in 2015. Two years later however Kumar resigned from the chief minister’s post citing undue interference from the RJD but returned to his post within a week with the BJP’s help. This made Kushwaa, who had built his party on an anti-Kumar platform, uncomfortable. Paswan too became insecure of his position in the NDA following the BJP-JD (U) pact.

Kushwah left the NDA as soon as it was evident that the BJP would be more accommodative towards the JD (U) in sharing of Lok Sabha seats ahead of 2019 elections. His party RLSP has since joined the ‘mahagathbandhan’ comprising the RJD, Congress and former Bihar chief minister Jitanram Manjhi’s Hindustani Awami Morcha, also a former BJP ally.

The RLSP’s exit from the NDA, however, provided an opportunity to Paswan to bargain hard with the BJP for more political space. As a result, the BJP has to sacrifice five seats it won in 2014. As per the seat sharing arrangement jointly declared by BJP president Amit Shah, Kumar and Paswan, the BJP and JD (U) would contest 17 seats each, while LJP would contest six seats. As a bonus, LJP reserves a Rajya Sabha seat for Paswan.

The BJP is the biggest loser of the deal as it is down by five seats even before the elections. The LJP, which had contested in seven Lok Sabha seats in 2014, too has to sacrifice its right to contest over one Lok Sabha seat but makes it up with the assurance of a Rajya Sabha berth.

There is no certainty about the BJP, JD (U) and LJP winning all seats they contest. Besides, there is a possibility of them facing defeat in many constituencies considering an emboldened RJD, Modi’s loss of popularity and Gandhi’s increasing acceptability across the country.

However, the real winner of the deal is JD (U). Politically astute Kumar has ensured that his party remains in the focal point of all political activities in Bihar post Lok Sabha elections. While the BJP or even LJP have chances of going down, the JD (U) may only go up from its 2014 tally of just two seats. That will enable Kumar to be in an advantageous position vis a vis BJP.

There is also every possibility of the RJD and Congress improving on their tallies of four and one seats respectively with the realignment of forces with the RLSP and HAM. The only party that seem to find itself cornered in the clash between the two sets of political forces is the BJP.

Kumar, who has seen the politics of Bihar revolving around his actions and reactions in over past 10 years, may have more surprises up his sleeves. He is bound to be relevant post general elections and it will be interesting to watch his moves even in the eventuality of the BJP-JD (U)-LJP coalition’s defeat. And the BJP might be in for a shock from his future moves as well.

Columns Priya Ranjan Sahu - August 21, 2021
0
One may find a request at the bottom of the social media message - ‘Pl circulate to as many contacts as possible’! And within...