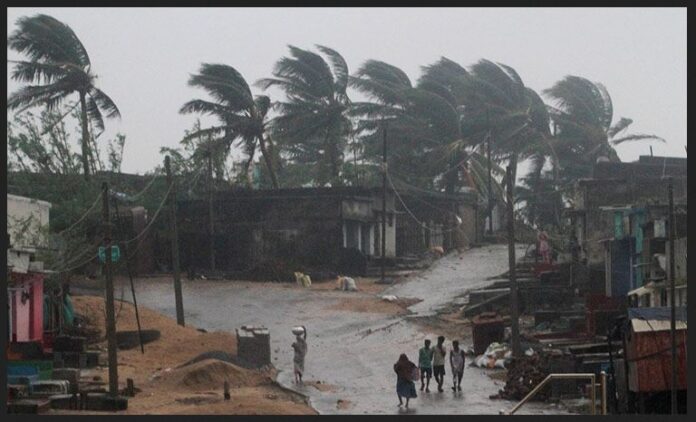 The details of the number of cyclones occurred in the country and the corresponding number of human lives lost due to cyclones and associated floods duringthe last five years are given in the following table. The number of deaths presented is with respect to media reports.

*The very Severe Cyclone ‘Ockhi’, though did not cross the coast, had claimed the lives of more than 200 Fishermen out in the Sea.

There are several scientific investigations carried out related to the frequency & impacts of Cyclones over the Indian region. The outcome is summarized below.

Studies show a decreasing trend in the frequency of formation of Cyclonic Storms over the Bay of Bengal and an increasing trend over the Arabian Sea, based on the data during 1965- 2020.

However, the coastal vulnerability to the categories of Extremely Severe Cyclones’ or more continues over the Bay of Bengal region, as there is no significant trend in the frequency of Extremely Severe Cyclonic Storms (ESCS). On the other hand, the increase in frequency over the Arabian Sea has not posed a corresponding increase in the coastal vulnerability along the west coast since most of such Cyclones forming over the Arabian Sea are making landfall over the coasts of Oman, Yemen etc and hence the threat to Gujarat & Maharashtra coasts remains same.

On an average, out of 5 Cyclones developing over the North Indian Ocean (NIO) comprising Bay of Bengal and Arabian Sea, about 3 to 4 of them make landfall causing loss of life and property. Low lying coastal belts of West Bengal, Odisha, Andhra Pradesh and Tamil Nadu & Puducherry are more prone to the impact of these systems. The number of deaths due to cyclones has decreased significantly, as a result of the improvement in the early warning skill by the India Meteorological Department (IMD) under the Ministry of Earth Sciences (MoES) and effective mitigation measures and response actions by National Disaster Management Authority (NDMA) and Ministry of Home Affairs (MHA). Still there is huge loss to property.

It may be noted that, greater vulnerability to tropical cyclone damage all over the world is mainly due to socio-economic and demographic factors. Improvements in warning systems and preparedness in disaster management remain critical to mitigate the loss of lives and, to some extent, loss of property. Some of the studies have highlighted the importance of land-use planning, development of coastal districts and insurance measures, in addition to development of a vigilant disaster management system.

Based on the Global best practices, the risk management of the Cyclones depends on several factors including (i) hazard & vulnerability analysis, (ii) preparedness & planning, (iii) early warning services and (iv) prevention and mitigation.

The ‘early warning’ is a major component related to MoES/IMD targeting improved skill in monitoring and prediction and effective warning products generation. It is important to continuously upgrade all the components of early warning based on latest technology for effective management of Tropical Cyclones. IMD has taken a number of steps in recent years to continuously enhance the capabilities in monitoring, numerical modeling and forecasting of the hazards associated with cyclones. Thus IMD has demonstrated its capability to provide early warning for Cyclones with high precision.

Further, the Government of India has initiated the National Cyclone Risk Mitigation Project (NCRMP) with a view to address cyclone risks in the country. The overall objective of the Project is to undertake suitable structural and non-structural measures to mitigate the effects of cyclones in the coastal states and UTs of India. NDMA under the aegis of Ministry of Home Affairs (MHA) is implementing the Project in coordination with participating State Governments and the National Institute for Disaster Management (NIDM).The Project has identified 13 cyclone prone States and Union Territories (UTs), with varying levels of vulnerability.

The main objective of the NCRMP is to reduce vulnerability of coastal communities to cyclone and other hydro meteorological hazards through;

This information was given by Dr. Harsh Vardhan, Union Minister for Science & Technology, Earth Sciences and Health & Family Welfare in a written reply in Lok Sabha