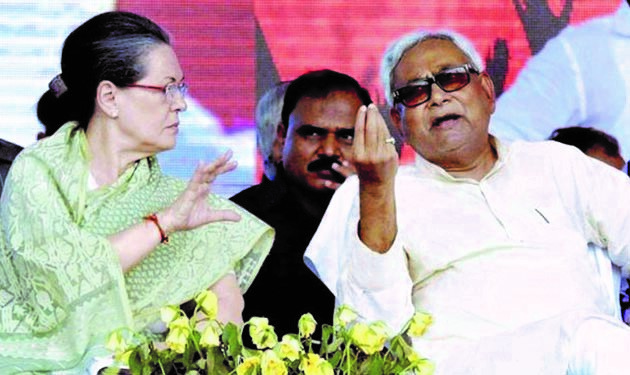 As Narendra Modi government completes its three years in office, the Congress-led opposition is trying hard to cobble together a federal front capable of taking on the NDA. The UPA, as it exists today, needs both to be strengthened and expanded.

The luncheon meeting called by Congress president, Sonia Gandhi recently to evolve a consensus on the opposition’s presidential candidate against NDA’s was an opportunity to strengthen the bond among the anti-NDA parties. On the face of it seems that Sonia did take a step forward in this direction.

Independent observers feel that a the luncheon hosted by Congress president Sonia Gandhi for leaders of Opposition parties though meant to finalize their common candidate for the presidential election in July actually turned into a show of unity with leaders and representatives of 17 parties sending out an unequivocal message to the Modi government that they were ready to take it on.

Sonia, in fact, achieved the rare feat of bringing together arch political rivals – the Bahujan Samaj Party and the Samajwadi Party from Uttar Pradesh and the Trinamool Congress and the Left parties from West Bengal – on a common platform.

It was an impressive gathering of leaders by any stretch of imagination. West Bengal Chief Minister Mamata Banerjee rubbed shoulders with Rashtriya Janata Dal chief Lalu Prasad, Bahujan Samaj Party president Mayawati, former Uttar Pradesh Chief Minister Akhilesh Yadav of the Samajwadi Party and former Jammu and Kashmir Chief Minister and National Conference leader Omar Abdullah among others. Though Bihar chief minister, Nitish Kumar stayed away he sent senior JD(U) leader Sharad Yadav to the meeting. Nitish later also issue statement that his absence at the meeting should not be misinterpreted as he had met Sonia a few days ago to discuss issues relevant to the opposition.

The urgency of purpose was quite visible as a resurgent Bharatiya Janata Party poses a threat to the very existence of the opposition. Hence anti-NDA parties, it would appear, are ready to sink differences and work as a unit both inside and outside the Parliament. More such shows of unity are expected in the coming days.

Significantly, RJD chief, Lalu Prasad Yadav invited all the Opposition leaders to participate in a public rally his party will be organising in Patna in August. West Bengal chief minister, Mamata Banerjee suggested that Opposition hold joint meetings and rallies across the country to send out a strong message that it was ready to take on the BJP despite latter’s growing clout.

The luncheon meeting, according to some observers, recalled Sonia Gandhi’s 2004 move when she had reached out to like-minded parties to build a secular alliance. The move finally gave shape to the United Progressive Alliance (UPA) which won two successive Lok Sabha polls in 2004 and 2009. The Congress chief must be hoping for something of that kind to happen again. But then she faces heavy odds this time.