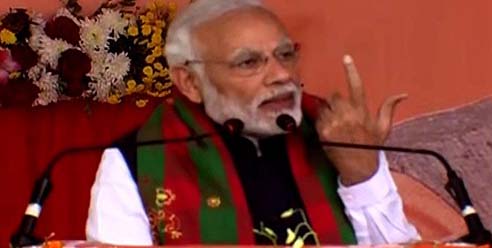 Modi’s 2014 campaign was how much it concentrated on economic issues and how much it tried to spin a narrative of hope for India. The striking about his 2019 campaign was that the two things which dominated it were nationalism and a nod-nod-wink-wink gesture toward majoritarianism.

There have been many interpretations of Narendra Modi-led Bhartiya Janata Party’s (BJP) massive victory in the recent Lok Sabha elections. Foreign observers have mostly seen as strengthening of Hindu-nationalism. Terms like Hindu majoritarianism have also been used.

However, even these observers concede that the win has cemented Modi’s control of the country and made clear his formidable popularity. The plight of Congress has also been dealt with in detail by these observers with one of them pointing out that Rahul Gandhi—the son, grandson, and great-grandson of Prime Ministers and the current face of the Nehru family dynasty—even lost his seat in Uttar Pradesh.

While it is being pointed out that Modi now has five more years to pursue his agenda with even less opposition these observers caution that this agenda ought to worry people. After all, according to them, Modi came to power after serving for more than a decade as the chief minister of Gujarat. During his tenure, in 2002, more than a thousand people, the vast majority of them Muslim, were killed during several days of rioting.

According to one of these foreign observers during Modi’s 2014 campaign, many commentators were willing to overlook this side of his candidacy in the hope that he would bring economic growth and rid India of corruption and dynastic politics but he failed to deliver on those promises. He weathered the fallout from his own disastrous demonetization scheme but still finds himself in office with an ever greater mandate.

It has been noted that while the striking thing about Modi’s 2014 campaign was how much it concentrated on economic issues and how much it tried to spin a narrative of hope for India the striking about his 2019 campaign was that the two things which dominated it were nationalism and a nod-nod-wink-wink gesture toward majoritarianism.

It has also been pointed out that he got this mandate despite the fact that the condition of Indian economy was not very good. It was certainly not a rosy picture. Yet another interesting observation is about forces that are trying to consolidate Hindutva into one larger Hindu identity. One hope was that a lot of caste-based parties or region-based parties will never let a consolidated Hindu majoritarianism emerge. But that hope has been belied.

There have been comments about the poor performance of Bahujan Samaj Party, the third-largest party, which represents lower castes and ethnic minorities in Uttar Pradesh. Perhaps the attempt to create Dalit social movements, which would traditionally have opposed Hindutva, are at their weakest. Hindutva is no longer simply an upper-class or élite phenomenon. It is spreading across social groups, and the incentive to oppose it certainly seems to be declining.

Thus, there are many versions of Modi’s spectacular electoral victory. But irrespective of how people paint him one thing is certain that he is a leader who cannot be ignored. And he is also a leader who correctly reads the pulse of his people.