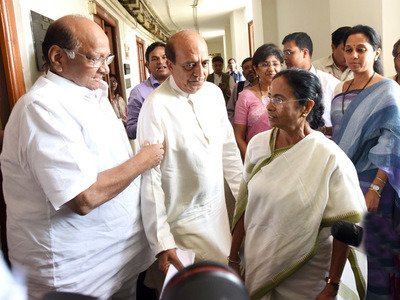 Praful Patel had met Mamata in Kolkata and invited her for a meeting with Pawar. K. Chandrasekhar Rao had also met her to discuss the possibility of a federal front against the BJP. While KCR called for a non-Congress, non-BJP alliance, Mamta seems to be in favour of a broader alliance of which Congress, too, would be a part as she realizes that without its support it would be difficult to create a one to one situation with the BJP in states.

With general elections approaching efforts to create a joint opposition front against the Modi government have gained momentum. At the moment West Bengal chief minister Mamata Banerjee is leading the campaign on this front. In Delhi recently she met a number of prominent non-BJP leaders including UPA chairperson Sonia Gandhi with whom she stressed the need for the Congress to join a united opposition front against the BJP.

Talking to reporters later Banerjee said the two leaders discussed the current political scenario and strategies to oust the BJP in Assembly and Lok Sabha elections.  “I told Soniaji that we want the Congress to be a part of the united opposition,” she said adding “I told her what the country wants is that there should be a state-wise, one-on-one fight with the BJP. The party that is the strongest in the state should contest against the BJP there.”

Banerjee also shared with Gandhi the discussions she has been having of late with the leaders of regional parties. “We are trying to work together…We want the Congress also to be part of that,” she said. The TMC leader has met several other opposition leaders including NCP chief, Sharad Pawar.

That Mamata is serious about finalising a strategy to corner the BJP is evident from her statement that she wants Congress to help one-on-one fights with the BJP in the states but parties which have an alliance with the Congress could carry on with their tie-ups.

“Lalu (Yadav) ji and Sharad (Yadav) ji have an alliance with the Congress. Their alliance will continue,” she said, adding that the opposition party which was the strongest in a state should be supported by the others to oust the BJP.

Earlier on 9 March, NCP leader Praful Patel had met her in Kolkata and invited her for a meeting with Pawar. On 19 March, Telangana chief minister K. Chandrasekhar Rao had met her in the West Bengal capital to discuss the possibility of a federal front against the BJP. While KCR called for a non-Congress, non-BJP alliance, Mamta seems to be in favour of a broader alliance of which Congress, too, would be a part as she realizes that without its support it would be difficult to create a one to one situation with the BJP in states.

It is significant to note that West Bengal chief minister was the first leader to speak on Bahujan Samaj party (BSP) chief Mayawati’s decision to continue the alliance with the Samajwadi Party (SP), aimed at containing the BJP, despite the setback in the recent Rajya Sabha election. “I welcome the views expressed by Mayawati ji. We are strongly with her and (SP leader) Akhilesh Yadav in this mission for the nation,” she had tweeted.

On 24 March, when Andhra Pradesh chief minister and TDP chief N. Chandrababu Naidu slammed as “a bid to spread lies” BJP president Amit Shah’s letter questioning the use of funds released by the Centre, Mamata was again quick to respond. Backing Naidu she had accused the BJP led government at the Centre of trying to bulldoze states.

In short Mamata has been making all the right moves and noises in her bid to put together an anti-BJP front which, it is evident, is a political necessity as much for her as for the allies she has been seeking out.Pratisruti Plus-April1-15-2018