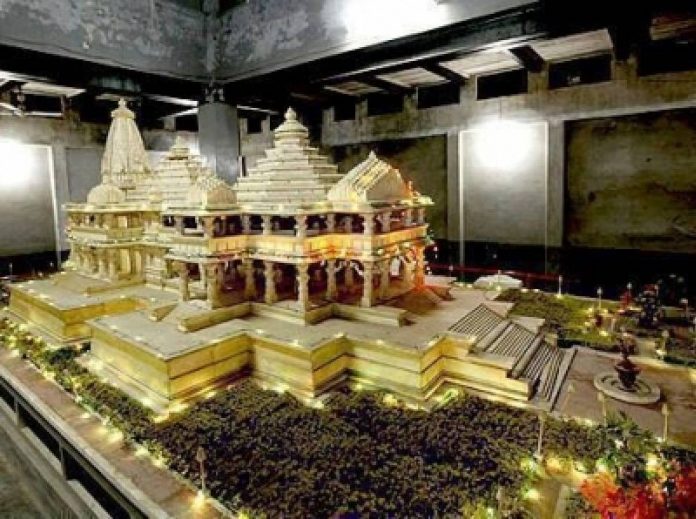 construction of a Ram Temple at the disputed site in Ayodhya, and directed the Centre to allot a 5-acre plot to the Sunni Waqf Board for building a mosque.

Preparations for Ram Mandir Bhoomi Pujan at Lord Ram’s birthplace in Ayodhya is in full swing with Yogi Adityanath-led Uttar Pradesh government leaving no stone unturned to make the grand occasion a huge success. Yogiji penned an emotional article calling the Bhoomi Pujan will bring an end to the 500-year-old long struggle and wa

it of devotees. He wrote, “We are truly fortunate that Lord Shri Ram has given us the opportunity that people have been waiting for. So many generations, who fought for this day over the years, are no more with us. This is a very emotional moment.”

Ahead of the Ram Mandir Bhumi Pujan in Ayodhya, preparations are underway in full swing. Houses and buildings on the main streets from Tedhi Bazar to Naya Ghat in Ayodhya, where the convoy of Prime Minister Narendra Modi will pass on August 5, are being painted yellow for the ‘Bhoomi Pujan’ ceremony of the Ram temple construction. Amid the pandemic, barricades have been put up across the town, with Chief Minister Yogi Adityanath issuing an appeal, asking only those invited for the ceremony to come to Ayodhya. Prime Minister Narendra Modi will share the dais with just four other people – RSS chief Mohan Bhagwat, trust chief Nritya Gopaldas Maharaj, Uttar Pradesh Governor Anandiben Patel and Yogi Adityanath. In keeping with Covid-19 norms, seating arrangements have been made in a way that all invitees will sit at a distance of six feet.

The invitees include 135 religious leaders from 36 spiritual traditions across the country. Although the main programme will take place on August 5, prayers and worship had begun since April 18, with regular recitation of the Vedas, Vastu, Grah, Nakshatra shanti path, Shri Ram naam paath, Hanuman naam paath and havan.

The Shri Ram Janmabhoomi Teertha Kshetra Trust will be sending boxes of Bikaneri laddoos to all foreign embassies in Delhi to mark the Bhumi Pujan ceremony of the grand Ram temple in Ayodhya. The laddoos will also be distributed in the temple town. According to the officials of the Trust, orders have been placed for 4 lakh packets of laddoos.

Emotion across the country seems to be in high spirit. Bihar’s Sitamarhi, considered Sita’s birthplace, is also all decked up for the Ram Mandir Bhoomi Pujan celebrations. The town will hoist 2100 saffron flags with Bhajan and Kirtans planned through the entire town. The Kar Sevaks from around the country are celebrating the occasion in their own towns and Temples. Odisha is no exception.

The entire plot of 67 acres has bee 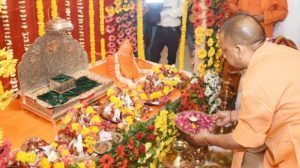 n levelled as a part of preparations for building the temple. Leading Construction Company Larsen &Toubro was already on the job doing testing of the soil etc., while architect Chandrakant Sompura, who had prepared the original design for the temple was giving final touches to the plan in accordance with the suggestions made by the trust. As per the final plan, the temple will now have five domes instead of the initially proposed three; even the height of the temple is proposed to be raised from the original plan of 128 feet to 161 feet.

The date August 5, marks the first anniversary of the revocation of Jammu and Kashmir’s special constitutional status with the reading down of Article 370 of the constitution, a long-standing demand of the Sangh parivar and one that predates even its Ram temple movement by decades. By linking these two events in this fashion, it is clear that a political message is being sent by the Saffron Party in power at the Centre.

The Ram Janmbhoomi Teerth Kshetra Trust recommended August 3 and 5 as the preferred dates for a grand ‘bhoomi pujan’ ceremony and described these as “auspicious” days. While the trust spokespersons did not give details on why these dates are “auspicious” – especially at a time when the coronavirus pandemic is raging and lock down and Unlock 3.0 restrictions prohibit religious and other large gatherings – the political leverage that a quick ‘bhoomi pujan’  could yield cannot be underrated. Not only do the rules prohibit large gatherings but persons over the age of 65 are “advised to stay at home except for essential and health purposes.” It is hard to see how a boomi pujan for a temple project that has been in abeyance for years can be considered essential. Except, of course, for politics.

The BJP hopes a definite move towards the construction of the Ram temple could give it mileage in the state elections in Bihar later this year and even in West Bengal in 2021, where Hindutwa will be a major poll plank for the party. It has also been noted that by the time the temple is built on the site where the Babri Masjid once stood, it will likely be time for the 2024 general elections.

Since bulks of the stones required for the temple were sculpted and ready, the construction of the temple could be completed between 36 to 42 months.” Significantly, that would mean by the middle or end of 2023 – just about six months before the next general elections in 2024. What kind of bearing the completion of the new Sri Ram Temple will have on electoral outcomes can be anybody’s guess! It is indeed perfect electoral engineering in the name of Lord Ram’s Wish.